Historic first settlement by Europeans in the Barossa Valley

Bethany is a small and beautiful village which was originally laid out in the Hufendorf settlement pattern - a town planning style which has houses adjacent to each other along the road and the land attached to the houses stretching behind them in narrow strips. This means that the best way to experience the town is simply to walk up and down the main road. Bethany is in the heart of the Barossa Valley wine growing area and attracts wine lovers who wander from cellar door to cellar door.

Bethany is located 70 km north-east of Adelaide in the heart of the Barossa Valley near the towns of Tanunda and Nuriootpa.

Although it doesn't look like it, Bethany is another German name. In 1842 28 Lutheran families - 34 children and 83 adults - arrived in the area and called it Neuschlesien (New Silesia). They called the first town Bethanian, a German version of Bethlehem and it was Anglicised during World War I when the country experienced an intense anti-German period.

Historical Walk of Bethany
The Historical Walk of Bethany, which covers a total of 22 places of historic interest in the village, can be downloaded at https://www.barossa.sa.gov.au/Media/Default/Community%20and%20Cultural%20Services/Libraries/Barossa%20Heritage%20Trail/Bethany%20Town%20Walk.pdf. The walk, because of the unique nature of the village (it was designed along the Hufendorf settlement pattern with the houses running along Bethany Road and the land attached to the houses stretching behind them in narrow strips) means that nearly all of the historic locations can be inspected simply by walking from Herberge Christi (the Lutheran Church) to Hage House. Beyond the main road are other houses, a reserve, the local quarry and the meatworks. It is important to download the map as most of the houses are private and it is often quite difficult to tell exactly which residence you are looking at.

1. Lutheran Church - Herberge Christi (Dwelling Place of Christ)
Within a year of arriving in the district the Prussian Lutherans had built a church with mud walls and a thatched roof. This elegant church replaced it. It was built in 1883 from stone quarried out of the Barossa foothills. Its spire can be seen from most vantage points around the village. The bell was rung at the end of each day to tell the workers it was time to return from the vineyards and fields. In 1888 a school was built next door.

2. Topp House
Located next door to the church and set well back from the road, Topp House was originally built with a thatched roof and central chimney. For over 40 years it was the home of the Friedrich Topp, the second schoolteacher in the village.

3. Old Lutheran Manse
Located opposite the church at No. 195, and built in 1866, this bluestone house was the home of the local Lutheran pastors. From 1866-1913 it was the home of George A. Heidenreich and his family and from 1913 it was home to H.F.W. Roehrs.

4. Pioneer Cemetery
A fascinating insight into the early history of the town with German graves which offer a glimpse into the lives of the early settlers. Note particularly the large number of child graves, a reflection on the harshness of life in the early settlement.

5. Tscharke House
Three houses further up the road from the cemetery is the Tscharke House which was built with some classic Teutonic features - a steep roof, casement windows and a loft which opens onto a eastern gable.

6. Dost House
Over the road from the Tscharke House is the tiny, cute Dost House which was built shortly after the settlers arrived in the valley. It is characterised by original pug walls, ceilings, beams and simple woodwork, all of which dates from the 1840s.

8. Kiel House
Located at No. 229 this is a rare example of a house set at right angles to the street. This resulted in the kitchen being in the middle of the house. There are outbuildings including a horse-drawn vehicle shed, a slaughter house and a smoke house.

10. Liersch House
Located at No. 237 this house has been restored and a number of impressive farm buildings have been attached. There is a vaulted brick cellar under the house and the roof frame is made from undressed branches.

14. Thiele House
Lying just beyond Thiele Road, the Thiele House was originally a two-roomed farm house which was built in the early 1850s. It is now surrounded by vineyards.

16. Schulz Farm Shed
Standing out on the left hand side of the road, the Schulz Farm Shed was probably built by Johann Friedrich Traube with the slabs being cut from mature trees and hand split by axe, maul and wedges. It was re-thatched in 2003 by the Barossa Vintage Festival Heritage Group and the Bethany community.

20. Bethany Reserve
A delightful picnic spot on Bethany Creek which was originally set aside as a water reserve. It was originally the village common where the animals of the original residents were allowed to graze. Today it is a pleasant place to rest and relax.

Barossa Sculpture Park
Located on Mengler's Hill Road 4 km from Bethany, the Barossa Sculpture Park is an impressive collection of sculptures positioned overlooking the Barossa Valley between Tanunda and Angaston. The Sculpture Park started in 1988 when the Barossa International Sculpture Symposium invited nine sculptors to carve super-sized works from granite and marble. Twenty years later, in 2008, a second Symposium was held and another eight works, all in black or brown granite, were added. For more information check out https://www.barossasculpturepark.com.

Heysen Trail
The 1,200 km Heysen Trail, which runs from Cape Jervis to Parachilna, passes through Bethany. The Heysen Trail website describes the Bethany section as "Section 18: Pewsley Vale to Tanunda. This is an easy section of trail that runs through the northern section of Mt Crawford forests and through the native bushland of Kaiser Stuhl Conservation Park with its unusual weathered rock features. Panoramic vistas over the Barossa Valley and Lower North are a highlight." It is a total of 19 km. For more details check out https://heysentrail.asn.au/heysen-trail/sections/pewsey-vale-to-tanunda.

* Prior to European settlement the Kaurna Aborigines were well established in the district. They lived on a diet of grass seeds, kangaroos, wallabies, possums, lizards and fish and protected themselves against the winter cold with possum skin rugs.

* In July, 1836 expeditions were sent from Adelaide to explore the South Australian hinterland.

* By December, 1837 explorers had reached Lyndoch.

* By 1838 explorers had reached the Murray River passing through the Barossa Valley.

* In 1842 the first major settlement in the Barossa Valley occurred at Bethany when 28 Lutheran families - 34 children and 83 adults arrived and named the area Neuschlesien (New Silesia). They called it Bethanian, a German rendering of Bethlehem.

* In 1845 the first Lutheran Church was built in the village.

* The land in the village became freehold in 1852.

* In 1875 the first missionaries to the Aborigines of Central Australia departed from Bethany.

* In 1929 the Lutheran Church acquired a new, larger organ.

The official site is https://www.barossa.com/visit/towns-and-villages/bethany. 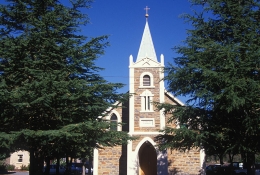 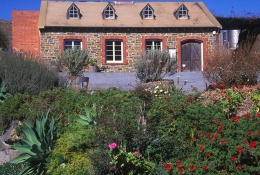 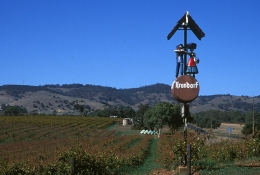 The Krondorf Vineyard near Bethany 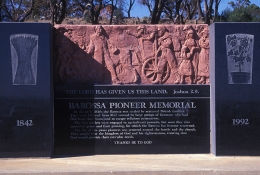 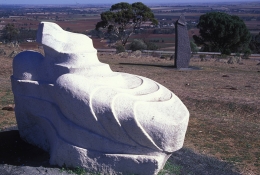 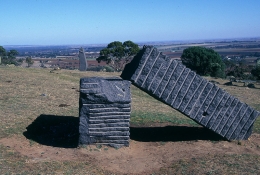 In 2008 the sculptors worked in South Australian Black Granite