Quiet Victorian wheatbelt town known as the Centre of the Barleybelt.

There is a remarkable tenacity about Beulah. There was a time when the wheat harvest was a significant income earner; wool was profitable; and the town thrived on the agricultural riches which surrounded it. As transport improved the service centre for the area became Warracknabeal, 37 km south, and the services in the town declined. The main attraction of Beulah today is that it offers an insight into what has happened to wheatbelt (and barley belt) towns.

Beulah is located 360 km north-west of Melbourne on the Henty Highway between Hopetoun and Warracknabeal.

"Thou shalt no more be termed Forsaken; neither shall thy land any more be termed Desolate: but thou shalt be called Hephzibah, and thy land Beulah: for the Lord delighteth in thee, and thy land shall be married." Isaiah 62:4 was the inspiration the McKenzie family, devout  local Presbyterians, took when they named this tiny town Beulah in 1891.

Exploring the Main Street
Today Beulah is worth visiting because time has stood still. The shops in the main street, although many are closed, are from another era and the sleepiness of the town is a reminder of a bygone era.  There is a guide to the services in the town which can be downloaded at http://www.beulahvictoria.com.au/images/stories/newcomersbooklet2a.pdf.

A Walk Along the Yarriambiack Creek
There is a pleasant walk along Yarriambiack Creek where there is both fauna and flora of the local area as well as a number of bollards recognising the town's enthusiasm for sports including netball, cricket, Australian Rules football and bowls.

The Beulah Federation Quilt
The Beulah Patchwork Group made a pictorial quilt to commemorate 100 years of the history and buildings of Beulah. Many photos were taken, photocopied and enlarged. The station is the central building as this is where the group meet. Other main town buildings are included as well as cropping and harvest blocks. Many techniques were used including hand and machine piecing, embroidery, appliqué, fabric painting and also printing on fabric. The top border depicts a sunset and the bottom border has the Yarriambiack Creek and mallee trees. The side borders feature birds and flowers common to the area. This magnificent quilt can be viewed in the meeting room of the Beulah Business and Information Centre, 77 Phillips St, Beulah, Monday to Friday 9.00 am to 5.00 pm. Check https://www.beulahvictoria.com.au/images/stories/muralbooklet.pdf for more details.

Brim Silos
Located 16 km south of Beulah are the now-famous Brim silos. In 2015 artist Guido van Helten painted 30-metre high portraits of four farmers on the disused Brim silos. Van Helten, a Brisbane artist, used a super cherrypicker for three weeks to create the work using spray paint and acrylic house paint. He has worked for up to 10 hours a day in temperatures which reached 40°C and strong winds to produce the mural. Upon seeing the result, the Brim Active Community Group president Shane Wardle, whose family has farmed in the town since 1894, reckons it's the biggest thing to ever happen in the town of about 100 people and a welcome boost at a time of drought and shrinking population. The project came to Brim by accident. Van Helten has done similar giant portraits in Ukraine, Norway, Italy, Denmark and Iceland, and he asked street artist management company Juddy Roller to find him silos in Victoria.
GrainCorp came up with a disused set at Brim, which dominate the town facing west over the highway. Funds were provided by Regional Arts Victoria and the Yarriambiack Shire Council, paint was donated by Taubmans and Loop Paints, and the local caravan park and pub provided free accommodation and meals.
Van Helten took photos of locals and mapped the work on computer, but a challenge was to accommodate the silos' curves.
Shane Wardle said the identities of the three men and one woman depicted were known but had not been publicised. "It's about the art," he said. "It's trying to capture the spirit of the local area. And he's done a great job."
Van Helten said that if the images are kept to archetypes: "People can have their own connection with it ... I don't want this to be about individual people specifically. It's about this place, it's about the community and, on a broader scale, the whole Wimmera region. If you leave the anonymity to these people and people see whoever they want to see, they can have their own connection to the work." Before even picking up a paint brush, Guido van Helten spent weeks touring Wimmera farms and getting to know the locals.

* The townsite stands on what was once Brim sheep station. When the area was opened up for closer settlement many selectors came from the Wimmera district, including the McKenzies who took up land just north of the present townsite in 1882. Devout Presbyterians, they named the township after a place-name in the Bible (Isaiah 62: 4).

* In 1885 a rabbit proof fence was constructed near the town to control both rabbits and dogs. It was unsuccessful.

* The McKenzie land was subdivided in 1890. That same year the first irrigation pipes in the area were laid down.

* A survey was conducted and Beulah was officially proclaimed in 1891. A post officce was opened in the town that year.

* The railway line was extended from Warracknabeal in 1893 which improved transport for the grains grown in the area..

* In 1894 the first edition of the Beulah Record and Mallee Advocate was published. 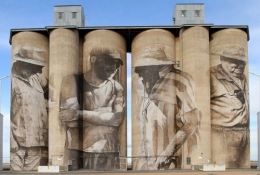 The silos at Brim, 16 km south of Beulah. 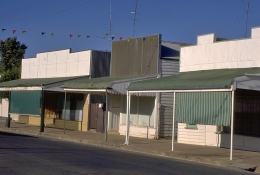 Closed up shops in the main street of Beulah. 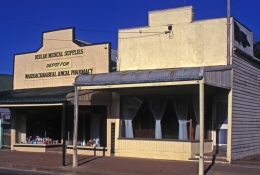 Shops in the main street of Beulah 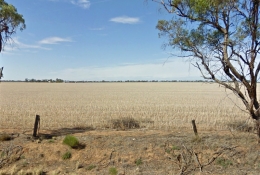 A wheat field outside Beulah.