Beveridge is a town in transition. Located only 59 km north of Melbourne it is fast evolving into a commuter belt community. At the moment there are still larger holdings and it has a decidedly rural feel but there are already housing developments in the area. Its great claim to fame is that it is the first place on The Ned Kelly Trail because the local historic primary school is where Ned Kelly was educated and on the edge of town is the home where Ned Kelly was born. The historic Kelly house, which is in serious decline, is the one reason for visiting the town.

Beveridge is a small township located 59 km north of Melbourne via the Hume Freeway.

The town is named after a Scottish shepherd and grazier, Andrew Beveridge, who arrived in the district in the 1840s and built the Hunters' Tryste Inn in 1845.

Kelly House - Ned Kelly's Birthplace
For years it was ignored and allowed to collapse into ruin. Slowly the town - now a northern commuter suburb of Melbourne - was allowed to grow up around it. Fortunately in recent times there have been signs that the government cares about this important footnote to Australian history. The plaque outside the ruin, sponsored by Heritage Victoria, records that the Kelly House is "The boyhood home of Ned Kelly. This house was built by Ned Kelly's father, John 'Red' Kelly in 1859. It was where Ned lived for perhaps four years of his boyhood and where his brothers Jim and Dan and sister Kate were probably born.

The Kellys came to Beveridge in 1854. They ran dairy cows and Red did carpentry jobs and speculated on land purchases with money earned from the gold diggings.

In 1859 he bought 21 acres and built this cottage using accessible bush materials - saplings for the frame, split weatherboards for the walls, timber shingles for the roof and local bluestone for the chimney and well. Refinements such as verandahs, wall-linings, ceilings and timber floors were absent. There were just two rooms, although a calico partition in the main room created a third, dividing living and sleeping quarters. The second room was a small dairy or coolstore, and beyond the house were a milking shed and stables. The family settled here in time for the birth of second son, Jim in July 1859.

Success was short-lived for the Kellys; the town failed to prosper and the family fell into debt; moving to rented accommodation in Avenel. By then there were six children and another on the way. James Stewart bought the house in 1864 and added nine more rooms. The former Kelly house is included in the Victorian Heritage Register.

Beveridge Primary School
The former Roman Catholic Church is perched on a hillside. This bluestone gothic church was constructed between 1857 and 1862, with the exception of the sacristy and chancel, which were added in 1877. It was originally registered as both school and church, in order to qualify for a school grant. It is widely accepted that Ned Kelly attended school here with his siblings.

The Hunter's Tryst
The post office on Pretty Sally Hill on the Old Hume Highway was built in 1844. Over the years it has been a cafe, tavern, bed and breakfast and it operated as a hotel in the 1860s. Today it is a guesthouse, function venue, restaurant and pub , tel: (03) 9745 2422.

* Prior to European occupation the area around Beveridge was home to members of the Woiworung Aboriginal language group.

* The first Europeans into the area were Hume and Hovell who passed through and crossed over Pretty Sally Hill on their way to Port Phillip Bay in 1824. It was from Mount Fraser that they first saw Port Phillip.

* In 1845 Andrew Beveridge built the Hunters Tryst Inn on what was to become the Hume Highway.

* In 1992 the house built by John Kelly was added to the Victorian Register of Historic Homes.

There is no Visitor Information Centre in the town.

There is no dedicated Beveridge website. The Kelly Trail - http://www.thekellytrail.com/nedkelly/towns/town/beveridge/2 - has some information as does the Hunter's Tryst - http://www.hunterstryst.com.au/. 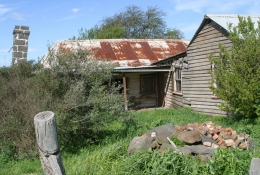 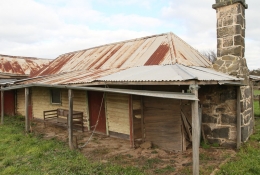 The remnants of Ned Kelly's birthplace - now on the National Register.