Western Australian wheatbelt town on the banks of the Avon River.

Beverley is a quiet, historic wheatbelt town located on the banks of the Avon River. It is a typical wheatbelt service centre with an attractive main street, a couple of museums and a sense of peacefulness of a Western Australian country town.

Beverley is located 130 km east of Perth on the banks of the Avon River.

Beverley was established in 1838 and Charles Simmons, the Colonial Surgeon at the time, named it after Beverley, a town north of Hull in Yorkshire, England.

A Walk Along Vincent Street
Beverley is one of the earliest settlements in Western Australia and has a number of early building constructed between the 1880s to the 1930s with both the Town Hall (built in 1938 and designed by architect William G Bennet) and Beverley Hotel being fine examples of Art Deco. The Union Bank Hotel dates from 1907 and is a superb example of Federation Free classical style architecture. The Court House dates from 1897 and was used until 1990. A walk along the main street is remarkably rewarding. How many other towns can boast both a 1960s geodesic dome and an art deco Town Hall.

Beverley's Remarkable Aeronautical History
The Beverley Aeronautical Museum (now demolished) was built in 1967 to honour the local inventor Selby Ford who, with a cousin Tom Shackles, built a biplane which they called the 'Silver Centenary'. Neither man was a flier and yet they designed the plane in chalk on their garage floor and it flew successfully in 1930. Later it was taken to Maylands Airfield where Major de Havilland and the aviatrix Amy Johnson flew it. Sadly it was never licensed because, being designed in chalk on a garage floor, there were no blueprints.
Since the museum was closed a replica of the 'Silver Centenary' can be seen in the Cornerstone Building which is also the Visitors Centre.

Dead Finish Museum
The Dead Finish Museum is recognised as the oldest building in town. It was built in 1871-1872 and over the years was known as the Wheatsheaf Hotel, The Old Settlers Arms and finally the Dead Finish Hotel. It is said that its last name came as a result of local workers, particularly sandalwood cutters, stopping at the pub before they headed out for more sandalwood. When it was built it was centrally located in the town but the arrival of the railway in 1886 saw the town slowly move towards the railway station and the hotel declined. It is open between March and November 11.00 am - 3.00 pm or can be opened by applying to the volunteers at the Beverley Information Centre.

Station Gallery
The Station Gallery is a fine example of local commitment. It was originally built in 1886 as the Beverley Railway Station and, at that time, was an important hub in the district. In 1984 it was closed. It fell into disrepair but the local people rallied and it restored and reopened as a gallery in 2006. Such was the work of the locals that in 2007 it won the Heritage Council of Western Australia award for the Conservation of a place on the State Register of Heritage Places. Today this attractive Victorian Tudor building is home to the a local art collection and the centre of the town's cultural life.

Street Murals
The artist James Giddy was commissioned to paint five murals and they can all be inspected along Vincent Street. They are wonderfully simple depictions of the life around Beverley with an impressive two sheep on Forrest Street (they are painted so that their wool depicts the surrounding countryside) and a huge cockerill on the side of the IGA building. For more information check out https://www.jamesgiddy.com.au.

The Cemetery
The local cemetery (it lies across the Avon River) includes the grave of the Aboriginal tracker, Billy Noongale, who accompanied the explorer John Forrest on his trek from Perth to Adelaide in 1870.

Avondale Discovery Farm
Located 6 km west of Beverley is the National Trust's Avondale Discovery Farm which is located on land originally assigned in 1832 to Governor James Stirling and Captain Mark Currie. Described as "a working farm ... You can take a gentle walk on the nature trail where you are likely to see kangaroos and emus, explore the 1850s homestead and have a look at the extensive agricultural machinery shed. And, you'll be able to see and touch a range of farm animals in the Animal Nursery." For more details check out http://www.beverleywa.com/Avondale. For more information and opening times contact tel: (08) 9646 1004.

* Prior to the arrival of European settlers the district was inhabited by members of the Ballardong Aboriginal language group.

* The first European into the area was Ensign Robert Dale in 1829 and 1830. He reported favourably on the agricultural potential.

* In 1831 2,850 ha of land was assigned to the Colonial Surgeon, Dr Charles Simmons. It is likely that Simmons gave the settlement the name Beverley.

* Land around Beverley was assigned as early as 1832 to both the Governor, James Stirling, and Captain Mark Currie.

* The town of Beverley was established in 1838.

* In 1871 the local Road Board was established.

* In 1872 the town acquired a hotel variously known as the Wheatsheaf, the Old Settlers Arms and finally the Dead Finish Hotel.

* In 1877 the telegraph line was extended from York to Beverley.

* The railway station was built in 1886 and is now one of the oldest buildings in the town. It closed in 1975.

* In 1892 Beverley became a separate municipality. It was known as 'The Burgesses of the town of Beverley'. It was dissolved in 1913.

* In 1908 a pipeline connected Beverley to the Goldfields water supply scheme.

* In 1961 the name of the Road Board was changed to the Beverley Shire Council.

* In 1973 the Beverley Soaring Society, a hugely successful gliding club, was established.

The local website has useful details about where to stay and where to eat. Check out http://www.beverleywa.com/ 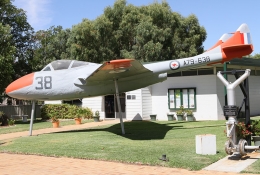 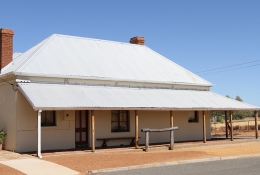 The Dead Finish Hotel (1872) which has been restored and is now a Museum. 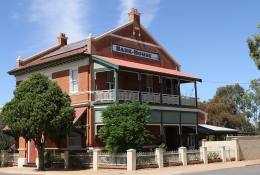 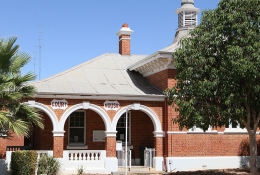 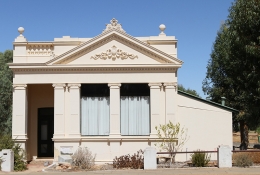 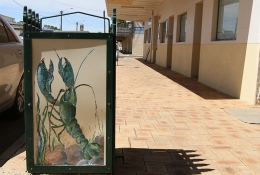 An attractively painted garbage bin in the main street 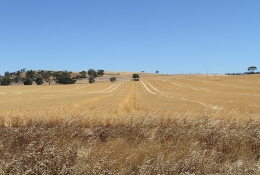 Wheatfields run to the horizon around Beverley