Quiet holiday and fishing town on the island's east coast.

Bicheno is a quiet seaside resort town on Tasmania's east coast which is known for its safe beaches, interesting coastal and hinterland walks, its distinctive red lichen on granite outcrops and its impressive blowholes. Fishing and tourism are the economic forces driving the town with the local fishing fleet bringing in good hauls of rock lobster, abalone, salmon, mackerel, cod and trevally.

The town was named after James Ebenezer Bicheno (1785-1851) who was appointed Colonial Secretary for Van Diemen's Land in 1842.

East Coast Natureworld
East Coast Natureworld is located on 150 acres (60.7 ha) of parklands and lagoons 7 km north of Bicheno on the Tasman Highway. It has been operating for over 30 years and offers an opportunity to see Forester kangaroos, wombats, Bennett's wallabies, Tasmanian devils, Eastern Quolls and Spotted-tail Quolls, koalas, Tasmanian bettong and Pademelons. The Natureworld started as a bird sanctuary and consequently there are aviaries with yellow-tailed black cockatoo, Major Mitchell's cockatoo, Gang-gang cockatoo, Long-billed Corella, Regent and Superb parrot, Indian Ringnecks, Mulga parrot, Eclectus parrot, King parrot, Eastern Rosella,  Cape Barren Geese and pelicans. The highlight of any visit is always the feeding of the Tasmanian devils. They are fed at 10.00 am, 12.30 pm and 3.30 pm. For more information check out http://www.natureworld.com.au or tel: (03) 6375 1311.

Bicheno Penguin Tours
If you have been to the Penguin experience at Phillip Island and you felt it was a little overcrowded then the Bicheno Penguin Tours is probably more to your liking. It is a nightly guided tour of the return of the little (one time known as "fairy") penguins after their hard day catching food out to sea. The tour is conducted at dusk, crosses some private property, and at its peak in the middle of summer, can involve as many as 600 birds. It is held in an area which cannot be accessed by the general public. The story of the tour is a story of tenacity against feral cats and local dogs. In 1992 there were as few as 40 penguins but the organisers of the tour - Paul Male and Nic Wardlow - killed most of the feral animals and the penguins prospered. For more information check out http://www.bichenopenguintours.com.au or tel: (03) 6375 1333.

Diamond Island Nature Reserve
Diamond Island, which can be accessed from the mainland at low tide, is a 6.76 ha nature reserve which is popular with visitors because it is home to colonies of little penguins (200 pairs in 2002), short-tailed shearwaters and sooty oystercatchers. It is a popular walk (or wade) for visitors and is particularly rewarding for birdwatchers. There is some evidence that the island was used as a whaling station in the nineteenth century.

Grave of Wauba Debar
Near the Australian Merchant Navy Memorial is the grave of Wauba Debar (she is remembered in the naming of Waub's Harbour) who died in June, 1832. She was a local Aboriginal woman, at a time when the women were treated appallingly by the sealers working in the area, who during a storm saved two European sealers when their boat was smashed against rocks. It is known that she was a remarkably strong swimmer. She had been kidnapped as a teenager because the sealers not only wanted her as a sexual partner but it was widely recognised that local women could swim amongst the seals and kill large numbers without being detected. Local legend has it that snowdrops bloom on Wauba Debar's grave every spring. The grave was established by local public subscription in 1855.

Merchant Navy Memorial
Ever since all the naval courses around Australia were concentrated at the Australian Maritime College at Launceston, Tasmania has become the focus for mementos to Australia's naval past. In September 2003 a memorial to the Merchant Navy was unveiled in Bicheno and in February 2004 the town presented the Australian Merchant Navy with a freedom of entry charter which granted the merchant navy access to the tiny harbour. It was a clever idea and the local children have become custodians of the memorial which is very close to Wauba Debar's grave.

Rocking Rock and the Bicheno Blowhole
To the south of the town (both are clearly signposted) are the deservedly famous Rocking Rock and the Blowhole. The Rocking Rock is an 80 tonne piece of granite which nature has accidentally balanced so that it rocks backwards and forwards with the movement of the tide. Nearby, on the granite outcrop, is the local blowhole which, according to the locals, is capable of blowing to a height of twenty metres. This area of the coastline is prone to rogue waves. At various points the granite has a distinctive red colour caused by deposits of red lichen.

One of the major attractions in the park is the Apsley Waterhole which can be reached by taking the Rosedale Road which is 3 km north of Bicheno via the Tasman Highway. The Apsley Waterhole is a ten-minute walk from the car park and is popular for picnics, bushwalking and swimming is possible on hot summer days.

The Tasmania Parks & Wildlife Service website (check out http://www.parks.tas.gov.au/index.aspx?base=3330) points out that "Short strolls from the Waterhole take in water views and the picturesque Apsley Gorge, with its tranquil pools and undisturbed river scenes. Longer walks lead through wildflower marshlands, wet gullies and deep gorges to spectacular waterfalls." Check out http://www.discovertasmania.com.au/about/national-parks-and-wilderness/douglas-apsley-national-park for more details.

* Prior to European settlement the area around Bicheno was inhabited by members of the Paredareme Aboriginal language group.

* As early as 1803, before the official European settlement of Van Diemen's Land, Bicheno was a whaling and sealing settlement. Waubs Boat Harbour was being used as a base for their activities on the east coast.

* In June, 1832 Wauba Debar, a female Aborigine who had been enslaved by the sealers, died.

* In 1845 the town's Court House/Gaol House, now a National Trust building, was completed. It is a simple stone building with unusual twelve pane windows.

* In 1854 the harbour was expanded to provide port facilities for the coal mining at Denison River.

* In 1855 the grave for Wauba Debar was established by public subscription.

* In 1866 Bicheno was officially proclaimed a town.

* The discovery of gold in Victoria saw most of the town's residents depart and for the next 100 years Bicheno was a small, sleepy fishing village.

* In 2003 a memorial to the Australian Merchant Navy was unveiled in the town.

There is no Visitor Information Centre in Bicheno.

Details about accommodation and eating in the area are available on http://www.tidelinesofbicheno.com.au. 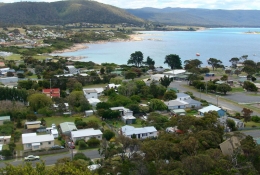 View of Bicheno from Whalers Lookout. 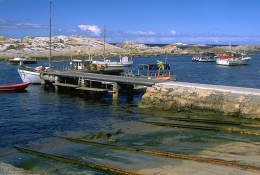 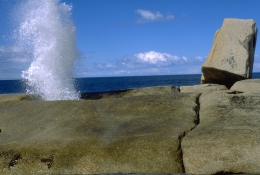 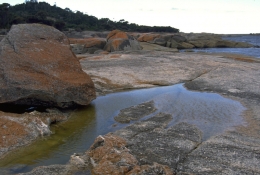 The red lichen on the rocks near the blowhole. 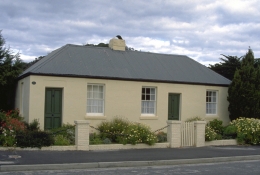 The Gaol House, now a National Trust property, dates from 1845.