Biggenden is a small rural service town which lies below the granite cliffs of Mount Walsh. It is surrounded by mixed farming with citrus orchards, timber logging, piggeries, beef and dairy cattle and peanuts being the main products. Many of the more interesting features of the district are located some distance from the town - notably the Biggenden Mine, Coalstoun Lakes and Mount Walsh National Park.

Biggenden is located 286 km north of Brisbane and 107 km west of Maryborough via Childers.

It is likely that the town's name is the local First Nation word for stringybark trees.

Biggenden Museum
Originally the Paradise Police Station and Court House, the Biggenden Museum is located at 8 Edward Street. It is a large low set single-storey timber structure on stumps with a corrugated iron clad hipped roof and exposed framework. Amusingly it was originally the top floor of the Paradise Court House.  A number of ancillary buildings and structures are located to the southeast of the main building.
The Museum promotes the history of Biggenden and the surrounding district with displays of historical items and contains photographs and memorabilia collected since its opening. A new shed houses farming implements and items pertaining to life on the land.
The Biggenden Museum building functioned as the Biggenden Court House until the latter half of the twentieth century. The Biggenden Historical Society was formed in June, 1980 and the former courthouse building was donated to the Society by the Queensland Department of Works and Housing on the 5th of August, 1980. For more detailed information check out http://old.northburnett.qld.gov.au/res/file/Local%20Heritage%20Register/AE/Biggenden%20Museum.pdf. The museum is open from 9.00 am - 3.30 pm on Tuesdays and Thursdays, tel: (07) 4127 1198.

The Pioneer Sculpture
"The Pioneer" metal art sculpture can be viewed in Beiers Park in Edward Street. It was created in 2009 by Bundaberg artist Dave Machen. The text accompanying the sculpture points out that it represents "Industries past - timber, cattle, mining. They were men of iron who battled for survival and shaped our modern development."  The sculpture alludes to the remnants of old work sites. The old barrow is a common find throughout the Biggenden area around closed mines, cattle properties and old timber yards.

Biggenden Mine
Biggenden Mine is located 8 km out of town and is clearly signposted 4 km from Biggenden off the Isis Highway. The  Biggenden Mine has been operating since 1888 with the production of bismuth and gold starting in 1890.
No one knows the exact quantities of minerals extracted from Biggenden Mine but the approximate figures give some indication of the changing focus of mining: approximately 6000 ounces of gold (1888-1901), 200 tons of bismuth (1901-1938) 330 000 tonnes of magnetite (1966 -1990), used in the treatment of export coal.
The excellent Crocoite site notes that in recent times it has become a popular place for mineral collectors because it contains excellent specimens of:
* large magnetite crystals
* secondary calcite crystals generally on primary calcite. The primary calcite fluoresces red but the secondary crystals do not fluoresce. There are commonly 2 or more generations of calcite present
* well-crystallised siderite
* fine crystals of epidote and actinolite
* crystals of arsenopyrite (some as cyclic twins), pyrite and chalcopyrite
* large quartz crystals, many of which are sceptred
* fine crystals of bismuthinite often found by leaching the primary calcite from vughs in the ore.
In addition, during the 1980s, crystals of the zeolites heulandite and laumontite were found, and recent examination of one specimen collected in 1984 by Keith and Margaret Brown of Echuca resulted in the discovery of sprays of colourless prismatic natrolite crystals." Remarkably over 80 minerals have been found in the mine.
There is a very detailed history and overview available from Crocoite, see http://www.crocoite.com/d/doku.php?id=biggenden_mine. Also Mindat.Org is well worth visiting at http://www.mindat.org/loc-42920.html. A recent visitor has noted: "The Biggenden Mines are not accessible to the public. The quarry business has blocked access."

The Chowey Bridge
Located 18 km north west of Biggenden via the Gooroolba-Biggenden Road, the Chowey Bridge was constructed for the railways and opened in 1905. This concrete bridge is supported by a main 27m concrete arch and a number of smaller arches. The last section of the route to the bridge is down a gravel road. The bridge itself is a beautifully proportioned concrete arch over a deep pool. This is an ideal place to experience the quietness of the bush whilst enjoying a picnic in the facilities nearby.

Mount Walsh National Park
Mount Walsh National Park covers an area of 5240 hectares, featuring a rugged undeveloped landscape of granite outcrops in a mountainous park of forested slopes and a diversity of vegetation from nine different plant communities, including some of the best subtropical vine forests in Queensland, which can be found in sheltered gullies. This habitat diversity is complemented by a range of fauna and birdlife which includes rare species such as the powerful owl, the grey goshawk and the peregrine falcon.
Bushwalking can be enjoyed at Mount Walsh but it is a challenging landscape and is only recommended for the fit and experienced hiker. Access is via the Maryborough-Biggenden Road. 2 km east of town, turn into the National Park Road and follow the signs for 5.4 km to a picnic area with tables, a barbecue, drinking water and pit toilets. Further along the road is Utopia Road which leads to a track which goes to Waterfall Creek Rock Pools.  For more information check out http://www.nprsr.qld.gov.au/parks/mount-walsh/about.html. There is a downloadable map of the walks and the 4WD route to Coongara Rock at https://www.npsr.qld.gov.au/parks/mount-walsh/pdf/mt-walsh-np-map.pdf.

Coalstoun Lakes National Park
Located 25 km south west of Biggenden via the Isis Highway, the Coulstoun Lakes are two old volcanic craters inside Mount Le Brun which fill with water after heavy rains. There is a 4.4 km (2-3 hours and quite difficult) walking track from Crater Lakes Road (it runs off the Isis Highway). There is an excellent downloadable map (https://www.npsr.qld.gov.au/parks/coalstoun-lakes/pdfs/coalstoun-lakes-map.pdf) which offers the description of the walk as "Walk up the steep, northern side of the crater to the crater rim for stunning views of the surrounding area. Descend to the first shallow lake and bird hide. Continue around the edge of the lake through dry rainforest, over a ridge with landscape views, and down to the second crater lake and bird hide. From this point, return on the same track back to the carpark."

* Prior to European settlement the area was occupied by the Waka Waka First Nation people.

* Biggenden came into existence in 1889 as a service centre to the goldrush towns of Paradise and Shamrock.

* The Paradise goldfield was formally proclaimed in 1890.

* The railway reached the town from Maryborough in 1891. The town was surveyed the same year.

* Paradise was drowned under the waters of the Paradise Dam in 2005.

The official local website, with useful information about accommodation and things to see, can be found at http://northburnett.org/destinations/biggenden. 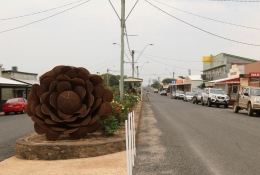 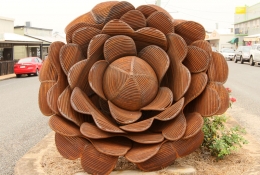 The Biggenden Rose in Edward Street. 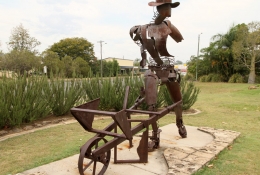 Sculpture of "The Pioneer" in Beiers Park in Edwards Street. 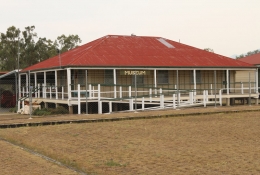 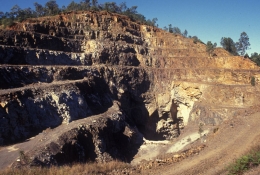 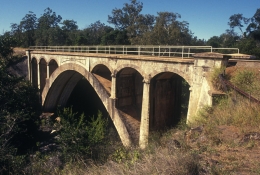 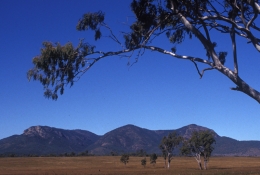