Biloela is a prosperous rural service centre with a population of over 6,000 which lies where the Dawson and Burnett Highways meet. The town's economy is driven by pastoral and agricultural enterprises and by the local coalmines which power the Callide Power Station. The district  is primarily driven by cotton production, dairying, wheat, sorghum, lucerne and other grains and cereals.

Biloela, which is 173 m above sea level, is located 572 km north of Brisbane via Gympie and Gayndah and 121 km south-west of Gladstone.

It is claimed that the local Gangulu Aboriginal people, who lived in the district prior to European settlement, named the area Biloela after the white cockatoo which was their totem.

Queensland Heritage Park
Located in parklands where the Burnett and Dawson Highways meet (you can see the distinctive Silo from the road) is the Queensland Heritage Park which, rather than having rooms of exhibits, has a huge atrium with excellent historic displays. The grounds around the silo contain a collection of vintage machinery and there is also the Post and Rail Cafe and useful, local Visitor information.

Spirit of the Land Murals
Located off the Dawson Highway, in State Farm Road, is a large water reservoir which has been used to create one of the most impressive and interesting murals in the country. Over a length of 100 metres (it is a series of interlocking images around the water reservoir) the stories of local women and their cultural histories, from prehistory to recent times, are told under powerful headings including "Knowing another's culture is the fastest road to friendship" [the caption associated with the mural image notes: "On Christmas Day 1861 the first white child in the valley was born at Prairie Homestead to Catherine O'Reilly. Through the curiosity and thoughtfulness of black women, in their assistance with child birth and knowledge of bush remedies to treat injuries and illness, white women began to appreciate black women and befriended them. There was considerable interchange between white and black women. Black women found the white women's constant concern for cleaning duties and care for goods and chattels quite amusing. Many black women became devoted nannies, endearing themselves to white women and children for many years, and often were never forgotten."
Other headings include "Women are storytellers", "Women's ability to read the land kept their families fed" [a truly fascinating plaque which explains that in Aboriginal life "Women at times provided up to 80% of a group's food supply. Some of the foods that they hunted and gathered included vegetables, honey ants, waterlilies, goannas, lizards, snakes and small marsupials. Seasonal delicacies such as eggs of a turtle and water birds provided a welcome change of diet. They were careful to make full use of everything their land gave them.] "Their way of relating to each other is in harmony with nature and impressive", "The land and Aboriginal people are inseparable", "Women displayed courage and tenacity", "She was renowned for her character and humour", "Women finally won the right to vote", "The impact of war was felt at home", "Educating children was yet another role women filled", "Closer settlement brought more people", "The simple things in life were treasured" and "Education took a leap forward with the first woman teacher".

Greycliffe Homestead
Located on the corner of Gladstone Road and Laurence Street, is Greycliffe Homestead. It was built in the 1860s from materials found on the property. The result was an elegant rural home built of timber slab with a impressive encircling veranda. Greycliffe Homestead has been re-sited from Rannes outside the town to its current location. It is a beautifully preserved slab hut which has been converted into a museum by the local historical society. It is open by appointment contact either Fay Neal (07 4992 3959), Margaret Muir (07 4992 2033), Bev Power (07 4992 1862), Elaine Hosking (07 4992 2340) or Doug and Lexie Howard (07 4992 3001).
There is an excellent single sheet brochure available at the Visitor Information Centre which provides a detailed history of the Nott family who lived in the house for over 100 years and a description of the original building: "Greycliffe homestead is built of slabs cut with a pitsaw and an adze, round bush timber rafters and originally had a shingle roof. In the 1920s the house was repaired and an iron pyramid shaped roof replaced the shingles. The main building is square and had a semi-detached kitchen. In the centre is a very large living room, at one end of which is the large open fireplace. The bedrooms were lined with calico suspended from the ceiling and chintz was stuck on the walls to cover the rough slabs."
Greycliffe Homestead is listed by the National Trust of Queensland. It was moved 37 km from its original site to its present location in 1979. It is a truly remarkable example of typical pioneer family life, the homestead and its out buildings have seen little change since the 1860s. The grounds now include a slab blacksmith's shop and a slab kitchen.

Bille Brown's Big Director's Chair
Of all the esoteric big things Bille Brown's Big Director's Chair, erected in 2003, has to rate near the top. Dubbed "The Boy From Biloela" Bille Brown, as the detailed plaque explains, was the local Lions Club Youth of the Year in 1969 and they obviously chose well because he went on to spend 12 years with the Royal Shakespeare Company in England; he played the lead role in Hamlet; and he acted in the well-known Australian movies - The Dish and The Man Who Sued God. He was a fine example of a person from a modest country town who went on to follow his chosen profession with considerable success.

Mount Scoria Conservation Park - The Musical Mountain
Located 16 km to the south via the Burnett Highway, Mount Scoria is a strange basalt formation about 150 metres high with symmetrically shaped rocks which look like a giant staircase. According to The Big Valley Story: "During storms the mountain seems to attract the full force of the elements - lightning crackles incessantly about the summit and thunder is amplified to an intensity which shakes the country for miles around."
But it is unlikely that you will be there during a storm. So, more sensibly, learn about the geology of the small mountain (it is really a hillock) and "Take a short cultural interpretative walk along the track at the base of the mountain and discover its significance to the Gangulu people." There are a number of Aboriginal information signs along the walk. They include a map of the traditional country of the Gangalu; the Wujanbara Bunna (Giant Man) story of the origin of Mount Scoria; the story of Nugugunda - the Stars; and the story of Dangama Mungar - the Talking Mountain.
The geology is well presented on a sign at the beginning of the walk: "Between 14.5 and 33 million years ago this was the site of an active but benign volcano. Mount Scoria originated from the mass of cooling lava which remained within the volcano when it became extinct. During the millions of years after the lava solidified, the surrounding soil and softer rock eroded away exposing Mount Scoria as a rugged outcrop of resistant rock. Despite Mount Scoria's name very little scoriaceous basalt is found here. Most of the rock is vesicular basalt formed from slowly cooling lava. Scoria is fragmented rock formed when gas explosions shatter and fling lava into the air during violent eruptions.
"Mount Scoria's vesicular basalt is shaped into distinct interlocking columns. These were created by a process similar to the formation of cracks in drying mud. When the molten rock first started to cool it developed a solid crust which cracked as it shrank. The cracks began as a surface network then slowly grew deeper as the lava below cooled. In this way long columns were formed at right angles to the lava surface. At Mount Scoria most columns have five to eight sides."
The sign also points out: "The vegetation fringing the base of Mount Scoria and scattered across its slopes is a semi-evergreen vine thicket (vine scrub), a stunted form of rainforest which can tolerate periods of low rainfall. During dry spells many of the trees in the scrub shed their leaves to conserve water. Seventy-two plant species have been recorded in the scrub."
Known as the 'Musical Mountain', the rocks found at Mount Scoria resonate when they are struck, making a humming sound.

Callide Dam and Callide Lookout
Callide Dam is located 17 km east of the town. It has a picnic area and facilities for waterskiing and fishing. It is known for its barramundi, saratoga, yellow belly and red claw crabs.
Follow the Dawson Highway from Biloela to Callide Road and turn right. Then turn left onto Ian Macauley Way and about half way up the hill you'll find the first lookout on the right, with views over the dam and parts of the power station. A little further up on the left is a picnic spot with toilets and views of both the Dam and Callide Power Station. Continue on to the top of the hill towards the lookout platform over the Callide Mine.

* The Gangulu tribe, who inhabited the region prior to European settlement, named the area Biloela after their totem: the white cockatoo.

* The first European to explore the area was Ludwig Leichhardt in 1844. This was during an expedition from the Darling Downs to open up a route to Port Essington. His reports encouraged the settlement of the area by pastoralists.

* Thomas Archer, a friend of Leichhardt's, selected the region that is now known as Eidsvold.

* The Queensland government opened an agricultural demonstration farm in 1923.

* The town was not surveyed and gazetted until 1924.

* The railway reached the town in 1925. A primary school was opened that year.

* it was not developed until 1942 when an open-cut mine was established on the site of the old Callide station.

* The power from Rockhampton was connected to the town in 1951.

* In 1977 the Gangalu people were registered as the traditional owners and native title owners of the lands including the town of Biloela.

* In 2015 Cyclone Marcia caused widespread flooding and damage in the town.

* Today Biloela is a modern town characterised by very broad streets and a well-established business centre. 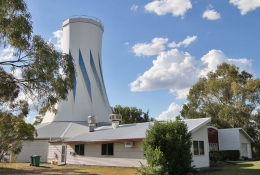 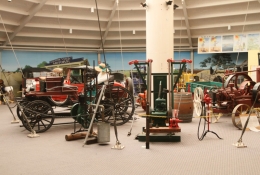 The exhibits inside the Queensland Heritage Park. 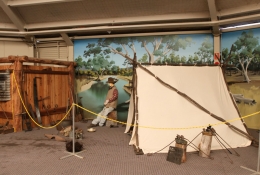 A worker and his crude tent - one of the exhibits inside the Queensland Heritage Park. 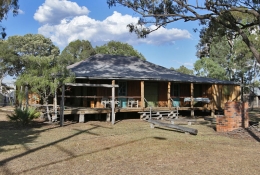 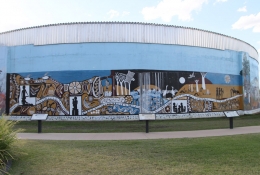 The mural is over 100 metres long and depicts the lives of women in the Biloela district. 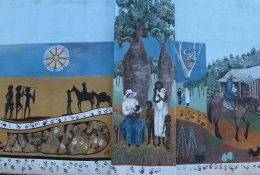 A section from the "Spirit of the Land" mural. 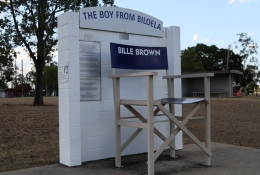 The Big Director's Chair - a memorial to actor/producer/playwright - Bille Brown AM. 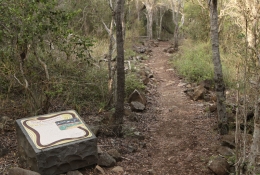 The path around the base of Mount Scoria has plaques telling the Aboriginal story of the musical mountain. 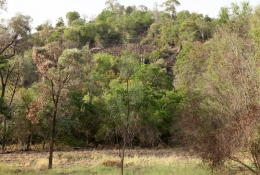 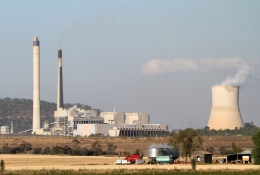