Historic town once the home of 'Banjo' Paterson and famed for the grave of bushranger, Johnny Gilbert.

Binalong is more a sleepy rural village than a town. It is rare in Australian terms having a village square which is edged by a General Store (once a bank), a pub and a number of small timber buildings. The main appeal of the town lies in its connection with AB 'Banjo' Paterson who went to Primary School in the village and the well-preserved grave of bushranger, Johnny Gilbert, which is located just out of town. Beyond that it has a number of impressive historic buildings; is the home to a small artistic community; and was, until his death in 2014, the home of English-born dramatist, Michael Boddy who saw it as his escape from city life.

Binalong is a small village located on Burley Griffin Way 311 km south-west of Sydney and 36 km north-west of Yass. It is 480 m above sea level.

There is some debate about the origin of the town's name. It is either a local Ngunawal Aboriginal word meaning "towards a high place" or a corruption of 'Bennelong', one of Sydney Town's most famous early Aborigines.

Historic Buildings
The best way to experience Binalong is to walk around the town soaking up the ambience and admiring the buildings. The sensible place to start is the park just down from the village square in Fitzroy Street. Pioneer Park, which has a bust of AB 'Banjo' Paterson, also has a number of boards with detailed information about the history of Binalong; the place of 'Banjo' Paterson in the life of the village; a potted history of John Gilbert, Bushranger; and "The Old Heart of the Town" which describes the town in the 1850s and 1860s.

The route: start at the park, walk up the hill to Wellington Street and the Hotel Binalong, then walk back down Fitzroy Street, admire the elegant Royal Hotel and then turn into Queen Street and walk along to the Court House. During that short walk you will note, at the Village Square, the old general store (originally built as the Australian Joint Stock Bank), the fountain and the Victorian-era lamps. The impressive Royal Hotel (1912) on the corner of Fitzroy and Queen Street and the old two-storey Court House in Queen Street which dates from 1883. Adjacent is a single-storey brick policeman's residence with gambrel roof.

Black Swan Inn
One of the town's most interesting and historic buildings is the old Cobb & Co Inn (1847) on the Burley Griffin Highway. It  is now the Black Swan Inn Gallery. Previously it was the Black Swan Inn, a remarkably good rural restaurant, but it is now an art gallery, wine bar and cafe which is open every day from 10.00 am - 5.00 pm extending to 7.00 pm on Friday and Saturday. The website (http://blackswanbinalong.com.au) points out that the historic inn was "Built of pisé (rammed earth) and hand hewn hardwoods, there are some non-standard relationships between doors and walls, ceilings and floors! These random elements combine with the classic - including pressed tin ceilings, antique glass doors and windows and embossed walls - to create a gallery space of timeless and original beauty." Tel: (02) 6227 4531.

Binalong Motor Museum
The Binalong Motor Museum is located in Stephens Street (Burley Griffin Highway) and is Australia's only purpose-built motor museum - it incorporates a restoration workshop. The vehicles, including Bugatti, Ducati, Lotus Elite, Delage and Norton motorcycles, are usually in working order and the display changes regularly. All visits are by appointment only. tel: (02) 6227 4251. Check http://www.visitnsw.com/destinations/country-nsw/yass-area/yass/attractions/binalong-motor-museum-9038113 for more details.

Peter Minson Art Glass
Located at 21 Queen Street, Peter Minson is a creative glass blower who, having worked in glass for over 40 years, produces both functional and art objects including wine glasses, teapots, flowers and tree sculptures. Contact for opening hours - tel: (02) 6227 4312 or http://www.minsonartglass.com.

Kuriong Sheep Station
Located only a kilometre from Binalong, the Kuriong Sheep Station offers groups an opportunity to see shearing, working sheep dogs, whip cracking and other faring activities. Morning teas, afternoon teas and lunches can be arranged. For details ring (02) 6227 4486. The station is only open for minimum of 20 group bookings. Check out http://www.kuriongsheepstation.com/about.html for details.

Gilbert's Grave
The Canadian-born bushranger Johnny Gilbert (1840-1865) arrived in Australia in 1852 and within five years had joined up with bushrangers. He joined Frank Gardiner and in 1862, at the age of 22, was part of the gang who held up the Gold Escort at Eugowra Rocks - the largest gold robbery in Australian history. By 1863 he was a member of Ben Hall's gang and by December of that year, along with Hall, he had held up the Boorowa-Binalong mail and the Yass mail. Hall's robberies turned deadly when, in November, 1864. Gilbert shot and killed Sergeant Parry at Jugiong and in January, 1865 John Dunn killed Constable Nelson in the main street of Collector. The gang were officially outlawed and on 5 May, 1865 Ben Hall was cornered and killed near Forbes. Eight days later, 13 May, 1865, Dunn and Gilbert were tracked down to Binalong where they were hiding in a hut owned by Dunn's grandfather, John Kelly. Kelly informed the police of their whereabouts and the police surrounded the hut. As the troopers rushed the hut the pair fled for the bush. Kelly had wetted Gilbert's cartridges and the bushranger was struck fatally in the chest by a bullet from Police Constable John Bright. Dunn was wounded but escaped. Gilbert was buried in the Police Paddock. Dunn was caught in late 1865 and hung in March, 1866.

Today visitors can head out of Binalong along the Burley Griffin Highway towards Harden and Gilbert's grave is clearly marked on the left at the edge of town. The indefatigable bushranger historian, Edgar Penzig, marked the grave with a sign which reads: "John Gilbert - Bushranger. Was shot by Constable John Bright in a battle with police near Binalong on Saturday 13 May 1865. Only 25 years old at the time of his death he had followed a life of crime for 10 years and was the most reckless villian (sic) of the Gardiner-Hall gangs of bushrangers. On the credit side it can be said he was a splendid horseman, a deadly shot, game with fists or gun. Always polite to women and of irrepressible good humour and witty speech. On Tuesday 16th May 1865 the body of "Flash" Johnny Gilbert was buried in the police paddock near Binalong township." A more sober, and less romantic, placard is located near the road. It describes Gilbert's brief life as a "reign of terror" and lists the Gold Escort robbery in 1862, a total of 25 hold ups and robberies in 1863, 21 in 1864 and 8 robberies before his death in 1865. A total of 55 robberies in the space of a little over two years.

* Prior to European occupation the district around Binalong was  occupied by Ngunawal and Wiradjuri Aboriginal people.

* In 1821 Hamilton Hume and a party were the first Europeans to explore the area.

* Hume returned with William Hovell in 1824 during their expedition to Port Phillip Bay (i.e., Melbourne) but they passed further south along the Murrumbidgee River.

* In 1829 Governor Darling declared that the Binalong district was beyond the legal limit of settlement.

* This restriction did not seem to stop settlers who brought flocks of sheep into the area and squatted illegally.

* In 1835 James Manning squatted at Cumbumurra Station between Binalong and Jugiong.

* In 1839 a police border camp was established at Binalong. This was the first European settlement in the area.

* In 1847 a permanent police force was established. That same year the Swan Inn was open for business.

* By 1848 most of the surrounding area had been settled with large grazing leases.

* The town's first post office was opened for business in 1849.

* A prison block was built in 1850. That year the town was surveyed and gazetted.

* In 1861 both St Peter & St Paul's Catholic Church and the town's first school were opened.

* The local police station was completed in 1862.

* In 1865 Johnny Gilbert, a member of Hall's gang, was killed during a gunfight on the Boorowa Road, near Binalong.

* In 1869 A.B. 'Banjo' Paterson moved to nearby 'Illalong' station at the age of five when his father bought the property.

* Paterson attended school at Binalong but, in 1874, was sent to Sydney Grammar School. His father is buried in the local cemetery.

* The railway arrived in 1876. Binalong became a departure point for gold shipments from Lambing Flat.

* The local Mechanics Institute was built in 1912.

The local website - http://www.yassvalley.com.au/towns-and-villages/binalong.aspx - provides basic information on the town. 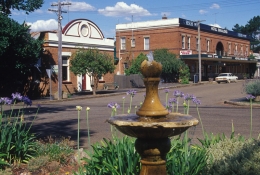 The fountain in the village square and the Hotel Binalong. 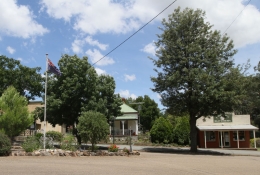 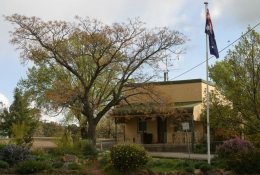 The town square at the centre of Binalong. 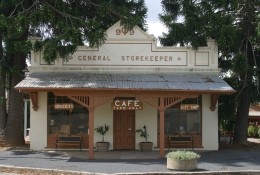 The General Store, once a popular cafe, now closed - it was built as the Australian Joint Stock Bank. 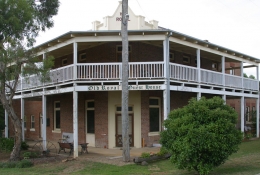 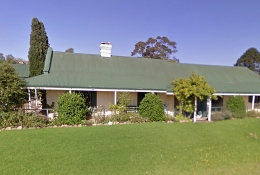 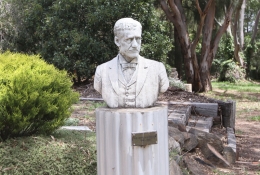 Bust of Banjo Paterson in the town's park.

The grave of John Gilbert just outside Binalong.