Birchip is a small Mallee service town surrounded by rich wheat farming lands. It has prospered as a service centre because of the reliable water supply provided by the Wimmera-Mallee open channel water system and the arrival of the railway in the late 19th century which guaranteed it continuing prosperity as a grain railhead.

Birchip is located 312 km north-west of Melbourne via the Calder Highway.

The early settlers in the district heard a local Aboriginal word which, over the years, they wrote down as  'Wirrumbirchip', 'Wurmburcheep' and 'Wirmbirchep'. They thought it meant 'one way' in hte local language and was a description of the route taken to avoid crossing through dense Mallee scrub. When the name became official it had been abbreviated to Birchip.

The Big Mallee Bull
There is a simple explanation for the presence of a huge Mallee Bull in the centre of town. It is the most recognisable "monster" in the local area and as such was feared by both Europeans and local Aborigines. The town reports that the "legend of the Mallee Bull" came about because "cattle strayed from the main mobs and set up their own select herds.  In the harsh environment of Mallee summers, the waterholes became the main battlegrounds for the survival of the species.  William Gould reported on finding the “Natural Waterhole”, having to remove the carcass of a dead beast from it before the water could be used.  W.L. Morton of Morton Plains writing of his experiences stated that “no other animal can put on a more fear-inspiring aspect than a full grown wild Mallee Bull”.  Mr. Stephen Laver, lessee of Black 56A comprising of a large tract of land within the Shire of Birchip in the 1890’s, often killed a wild beast for meat which he shared with the Aborigines of the area ... Legend has it that “Big Red” put fear into the hearts of the natives and early settlers.  His roaring and rampaging as he fought pretenders to his claim of chief of the herd could be heard for miles around.  The Aborigines, in their “humpies” and “lean-to’s” and inadequate shelters, lived in dread of his visitations.  They, too, had to share the same waterholes.  “Big Red” was the philosophical demon which kept the children of the early settlers in their beds at night with such parental admonitions as “Big Red will get you,”... As King of the mob, “Big Red” was a magnificent creature, strong of physique, colourful and resourceful with a cunning which enabled him to survive droughts, the elements, his hunters and his rivals.  The saying “Fit as a Mallee Bull” is universally accepted as embodying all those characteristics which “Big Red” displayed in the animal kingdom. As one of the earliest settled areas of the Mallee, Birchip can justifiably lay claim to “Home of the Mallee Bull”."

Sharp's Bakery
To people outside the Mallee and the Wimmera being winner of the Great Australian Vanilla Slice Triumph competition might seem unimportant but to the people of Ouyen, when in 1998 former Victorian Premier Jeff Kennett declared that "The pursuit of the best vanilla slice baker in Australia should be of great national interest. I encourage bakers throughout Australia to rise up and pit their skills against their peers..."   he created a regional obsession. In fairness I would have to concede that Sharp's make no ordinary vanilla slice. The usual glob of congealed custard which lies at the heart of the creation has been replaced by something which goes much closer to mousse and the result is sensational. They won the competition in 2009 and 2012 and proudly announce their win with a large sign in the shop window.

Tchum Lake
Tchum Lake is located 8km east of Birchip and is an artificial lake which is used by the local community for swimming, boating, canoeing, water-skiing, windsurfing and fishing.

* Before European settlement the Aborigines of the northern Mallee passed through the Birchip district on their way to the Murray River. They came through the district to avoid the harshness of the Mallee scrublands.

* In an attempt to settle the area after the goldrushes the Victorian government created a Lands Act in 1869 which broke the area into allotments of 320 acres. This was too small for economic viability and farmers were forced to circumvent the regulations by purchasing adjoining blocks in the names of family members and thus creating viable land holdings.

* The town started life as a camp for surveyors and workers clearing the scrub. It slowly became a gathering point for the local farmers.

* Birchip wasn't settled until 1882 and the town wasn't given its official name until 1896. The town started to prosper with the arrival of the railway in 1893. For a short time it was the main railhead for the local wheat farmers.

* The economic viability of the district was greatly enhanced with the construction of the Wimmera-Mallee open channel water system in the early twentieth century . It carried water from the Grampians - the channels still exist around the town. It is claimed that it is the largest water distribution system in the southern hemisphere.

There is no specific visitor information in town. Check out the website listed below for additional information. 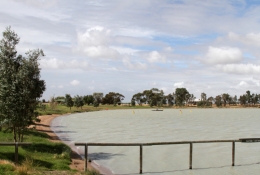 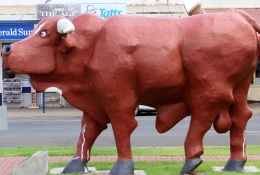 The Big Mallee Bull in the median strip at the centre of town.