Blackheath is a charming village which, with a number of fine restaurants and excellent upmarket boutique accommodation options has, in recent times become one of the fashionable retreats in the Blue Mountains. It is known for its outstanding rhododendron gardens - which it celebrates with a festival each spring - and its excellent vantage points offering the finest northern vistas from the ridge which runs up the Blue Mountains. It also has a wide variety of bushwalks from the easy to the challenging. It is considered one of the very best of the villages spread along the Great Western Highway.

Blackheath is located in the upper Blue Mountains 1064 m above sea level and 112 km from Sydney.

Blackheath is a true rarity. It changed its name in its first sixteen days of existence. When Governor Macquarie crossed the Blue Mountains in 1815 on his way to Bathurst he noted that the district 'having a rather wild heath-like appearance, I have named it Hounslow.' When he returned sixteen days later he changed his mind. His diary entry for 15 May 1815 records: 'This place having a black wild appearance I have this day named it Black-heath. It affords however plenty of good water for man and beast and tolerable good feed for the latter.'

Govett's Leap
No visit to Blackheath is complete without gazing in wonder from the lookout at Govett's Leap. The view across to Pulpit Rock, Mount Banks and and the upper reaches of the Grose Valley is one of the finest in the Blue Mountains. There are a number of walks in the area including the opportunity to descend into the valley or to take the Cliff Top Walk to Evans Lookout.
There is a delightful piece of mythologising about the name Govett's Leap. A story, almost certainly apocryphal, recounts how a bushranger named Govett was being pursued by the police. Determined not to be taken alive Govett spurred his horse over the cliff and dropped 450 m to his death on the rocks below. The real explanation is more pedestrian. There was a surveyor named William Romaine Govett who had arrived in Sydney in 1827 when he was only nineteen. He was surveying the old road to Bathurst when he 'discovered' the place now known as Govett's Leap In 1835, having returned to England the previous year, he wrote "The most remarkable of these cascades is the one near the Weatherboarded Hut [Wentworth Falls] and that which falls into the head of the Grose River; which the surveyor general named 'Govett's leap' from the circumstance of my first having come upon the spot when surveying with Mr Rusden." The bushranger story is simply a myth.

Bushwalking in the Area and the Blue Mountains Heritage Centre and National Parks Shop
The best place to start exploring the area around Blackheath is the Blue Mountains Heritage Centre and National Parks Shop at the end of Govetts Leap Road. It has information about all the walks in the area and there is a ranger in attendance who can offer specific and specialist advice. The centre also has displays relating to the local walking tracks and natural attractions and camping areas as well as gifts, souvenirs, videos, an art exhibition, an interactive educational display and books.
The centre is the start of the easiest walk, the Fairfax Heritage Track (2 km one way) which offers panoramic views, birdlife, waterfalls, and is accessible by people in wheelchairs.
Other walks from Govett's Leap include the Pulpit Rock Walk (2.5 km one-way) which passes through rainforest, offers views of Horseshoe Falls and excellent birdwatching. The Pulpit Track track connects up with both the Popes Glen Walk which heads back towards the town and the Rodriguez Pass Walk which heads east past Trinity Falls (on Govett's Leap Brook) and into the valley.
The Cliff Top track (3 km one way) heads past Govett's Leap and the Bridal Veil Falls along the escarpment to Evans Lookout.

Evans Lookout
Another, and quite dramatically different, view across the Grose Valley is available from Evans Lookout (head out on Evans Lookout Road which lies east of Blackheath). From Evans Lookout there are a number of walks. The Cliff Top walk (described above) leads back to Govett's Leap. there is also the Neates Glen/Grand Canyon Circuit Walk (5 km) which drops into the valley.

Grose Valley
Just west of the Blackheath shopping centre, running off the Great Western Highway, is Hat Hill Road which has a number of interesting walking tracks which lead to Anvil Rock, Perrys Lookdown and the Grose Valley. These offer more unusual views across the Grose Valley to Mount Banks, Walls Lookout and Pierce's Pass.

The Campbell Rhododendron Gardens in Bacchante Street
Blackheath's festival highlight is the Rhododendron Festival which is held annually in the second week in November when the entire region is a riot of colour with the flowers, which seem to be in every garden, in full bloom. The highlight of any trip at this time is the remarkable 18.5 ha Campbell Rhododendron Gardens in Bacchante Street (at the northern end of Blackheath) is open from 9.00am - 4.00pm daily and has established a balance between natives and rhododendrons. As they proudly declare: "It is a garden unique in the world – no other garden has attempted to plant exotics underneath their existing native bush on such a large scale." There are more than 1500 rhododendrons in the gardens. Check out http://rhodogarden.org.au/ for comprehensive information.

Megalong Valley
Check out the Megalong Valley Aussie Towns entry for details of a rare opportunity to drive into one of the three main valleys - the Jamison, Grose and Megalong - which are central to the Blue Mountains.

* The area had been occupied by the Dharug Aboriginal people for an estimated 40,000 years before Europeans arrived. There is some evidence that the Blackheath area was an annual meeting place for the Dharug and the Gundungurra from the south and Wiradjuri from the west.

* The first Europeans into the area were Blaxland, Wentworth, Lawson and their party who, successfully traversing the Blue Mountains, reached Mount Blaxland on 31 May, 1813. They had reached the location where Blackheath now stands on 27 May.

* On 28 April, 1815 Governor Lachlan Macquarie and his party passed through the area on their way to the new settlement at Bathurst. Amusingly as he passed through on his way west, Macquarie declared 'it having a rather wild heath-like appearance, I have named it Hounslow' but when he returned sixteen days later he declared 'This place having a black wild appearance I have this day named it Black-heath. It affords however plenty of good water for man and beast and tolerable good feed for the latter.'

* The first road through the area was completed by Captain William Cox in 1817 and officially surveyed in 1823.

* By 1831 a Scottish farmer named Andrew Gardiner had built the Scotch Thistle Inn which, five years later, achieved a brief moment of fame when Charles Darwin visited it.

* The main western railway line came through in 1869 and the Blackheath railway station was completed in 1883.

* In 1885 Blackheath was gazetted. It was absorbed into the City of Katoomba and Shire of the Blue Mountains in 1947.

* Throughout the 1920s the walks in the area became a popular tourist attraction and in 1934 Govetts Leap Lookout was named.

* Today the town is a popular tourist destination which is famous for its superb rhododendron displays, the magnificent northerly views at Govett’s Leap, the bushwalks around the edges of the Grose Valley.

There is excellent information available about Blackheath and the surrounding region from the Blue Mountains Heritage Centre and National Parks Shop, Govetts Leap Road, Blackheath, tel: 02 4787 8877 which is particularly good for bushwalking advice and the Blue Mountains Visitor Information Centres at Katoomba and Glenbrook.

Philip Searle's justifiably famous Vulcan's at 33 Govetts Leap Road has been awarded one hat by the Good Food Guide for years. Tel: 4787 6899. In recent times Ashcrofts at 18 Govetts Leap Road (tel: 4787 8297) has also been impressive.

There is a very detailed history of Blackheath at http://www.dictionaryofsydney.org/entry/blackheath 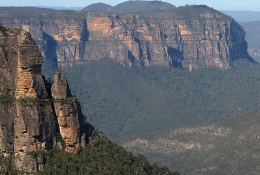 The view from Govetts Leap across to Pulpit Rock Lookout and down into Govetts Creek. 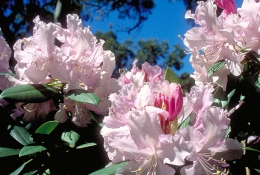 Rhododendrons in bloom in Blackheath 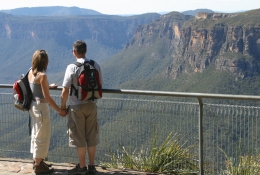 The view from Evans Lookout. 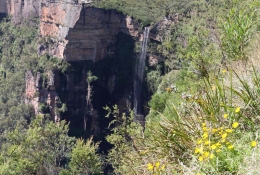