Mining town now known as the Coal Capital of Queensland.

Viewed from the air Blackwater is a place where the bulk of the town is hidden from the traveller on the Capricorn Highway. The terrestrial traveller sees little more than a few petrol stations and motels, the impressive Blackwater International Coal Centre, the Lions Park with its 37 flags and the small rail exhibition. The aerial visitor, looking beyond the Capricorn Highway, sees neat rows of houses, a shopping centre, a secondary school, hospital and, perhaps most importantly the Blackwater Mine Workers Club. This is a town made specifically for coal miners in a time before "fly in, fly out" was fashionable. It was a town created to keep miners happy and ensure their families were involved in a vibrant community. It is a model of a clean coal mining town. The coal is shipped to Gladstone by electric trains which are often over a kilometre in length. Consequently there are no coal trucks choking up the roads and the huge open cut mines are far removed from the town.

Blackwater is 822 km north-west from Brisbane and 203 km west from Rockhampton on the Capricorn Highway.

Early European settlers noted that a lot of the local water holes seemed to have black water (possibly coloured by the coal in the area) and so when the town was gazetted in 1886 it was named, very simply, Blackwater.

Blackwater international Coal Centre
The highlight of any visit to Blackwater is a few hours spent at the Blackwater International Coal Centre (BICC) which, in this time of global warming, is a reminder that the Bowen Basin and towns like Blackwater, are still vitally dependent on coal.  The BICC is an opportunity to understand the formation of coal in the area; the importance that coal has to the towns specifically created to exploit the energy deposits; and to discover why Blackwater is named “The Coal Capital” and what the future holds. The Australian Coal Mining Museum, which is an integral part of the BICC, showcases sophisticated interactive media displays, has exhibits which highlight the size and scale of the operations (the machinery on display both inside and outside the building is huge), and has simulations and graphs which show how vital coal is to modern society.
It is possible to join a guided tour of one of Blackwater’s operating coal mines. The tours, which last around three hours, operate every Tuesday and Wednesday and start at 9.30 am from the BICC. The tours are described by BICC as "See the magnificence of massive open cut pits, oversized machinery and equipment, and learn about coal mining from an expert mining operator." Bookings are essential, tel: (07) 4982 7755.
The Coal Centre also has a cafe and the Japanese Garden is next door. Check out http://bicc.com.au for more information.

Japanese Garden
The Garden, located immediately to the east of the BICC, marks the Duaringa Shire Council's relationship with its Sister Town, Fujisawa in Japan.
Commenced in December 1997, it was completed eight months later and officially opened on 1st August 1998, in the presence of the Mayors of Fujisawa and Duaringa Shire, and other visiting Japanese and Australian dignitaries. Approximately 600 tonnes of ornamental stone are used in the garden, which was constructed by Duaringa Shire council staff, in association with 14 Japanese gardeners, carpenters and interpreters who visited for a period of 8 days.
The placard at the entrance designates 21 specific features ranging from a Koadaiyukimi lantern to a bamboo garden and a Tsukubai (purifying fountain). The placard explains: "This traditional garden features the various styles used in Japanese gardening. The use of white gravel and stones denotes water flowing from a waterfall. The placement of rocks within the gravel patterns symbolise the planets in space. The lanterns represent various facets of life and the Goju no tou lantern represents elements of water, fire, earth, wind and air. Some like the Yamadoro lantern, are made from volcanic rock and are unrefined, unlike the more decorative varieties. An Azumaya (sitting house) is for tea ceremonies or for just relaxing and being at one with the beauty of nature. The pond is an integral part of any Japanese garden as are all the elements of nature."

The Lions Park
On the Capricorn Highway and marked by the water tower (it lies east of the BICC) is the Lions Park which has the flags of 37 nations flying. Why 37? The idea was to have a flag for every nationality working on the coalfields. It is recognised as the largest flag display in the world apart from the United Nations building in New York. The Lions Park is an pleasant place to stop for a picnic.

The Bowen Basin
The Bowen Basin is one of the richest coal mining areas in the world. It was formed around 290 million years ago (in Early Permian times) when a narrow basin resulted from the subsidence of the eastern coast of Queensland. In Mid Permian times the basin was flooded and as the sea withdrew it became alluvial plains with swamps and deltas. By 235 million years ago (the Mid Triassic period) the sea had been cut from the basin and coal began to form. Today the coal deposit stretches from Collinsville in the north to Theodore in the south. It covers an area of 60,000 square kilometres (that is 6/7ths of Scotland or the Republic of Ireland – both are around 70,000 square kilometres in area) and has known coal reserves of 25,000 million tonnes. They are the largest deposits of bituminous (black) coal in the world.

Blackdown Tablelands National Park
Located 35 km from Blackwater and 11 km west of Dingo (turn off the Capricorn Highway between Bluff and Dingo) are the spectacular Blackdown Tablelands which are managed by the traditional owners, the Ghungalu Aboriginal people. The tablelands are a sandstone island which rises 600 metres above the surrounding plains.
The 23,000 ha Blackdown Tableland National Park is characterised by waterfalls, dramatic cliffs, excellent bushwalks and Aboriginal rock art. The tablelands were formed when a shift in the earth's plates pushed sandstone and sedimentary rock upwards from an inland lake.
The Queensland Department of National Parks website (https://www.npsr.qld.gov.au/parks/blackdown-tableland/about.html) explains: "The park supports diverse plant communities including heathlands, dry eucalypt forests and moist pockets of ferns, mosses and orchids. Being elevated, the tableland is often cooler and moister than nearby plains. Its isolation means plants and animals that are found nowhere else thrive here. These include the Blackdown stringybark, a macrozamia, red bottlebrush, the Blackdown “monster” (a type of underground cricket) and a Christmas beetle." There is a rich aboriginal history characterised by a number of interesting artefacts including examples of rock art.
There's a sealed road to the edge of the mountains which runs south from the Capricorn Highway. It travels for some distance across flat land but when it starts to climb up to the tablelands it becomes steep and winding. Some sections of the park are accessible to 2 WD vehicles driven with care, but you will require a 4 WD vehicle for the Loop Road to Mitha Boongulla.
The reward once you reach the top of the tableland at Yaddamen Dhina (Horseshoe Lookout) is a magnificent view of rugged cliff faces with the lowlands stretching away to the horizon.
There are a number of walking tracks in the park - to Goodela from Yaddamen Dhina (1.8 km) and to Goon Goon Dhina (2.5 km) and Mook Mook (1.2 km) from the Munall camping ground. Camping facilities at Yaddamen Dhina and Munall camping ground comprise pleasant bush settings with toilets, fireplaces and picnic tables though you need to bring your own drinking water. Check out http://www.nprsr.qld.gov.au/parks/blackdown-tableland/about.html for more details.

* Prior to the arrival of Europeans the area around Blackwater was home to the Ghungula Aboriginal people.

* In 1845 Ludwig Leichhardt  travelled through the district on his journey to Port Essington in the Northern Territory. 27 km from the present site of Blackwater, Leichhardt observed "beds of coal indistinguishable from those on the Hunter at Newcastle."

* In 1877 the Great Western Railway was extended through Blackwater from Rockhampton. That year the town's post office opened.

* The township was gazetted and laid out in 1886. A school was built in that year.

* There was an attempt to establish a coal mine west of Blackwater in 1892-3.

* In 1967 the first open cut mine in the area started operating.

* The railway line to Gladstone was electrified in 1988.

There is a useful history of the town at http://queenslandplaces.com.au/blackwater. Also check out http://bicc.com.au. 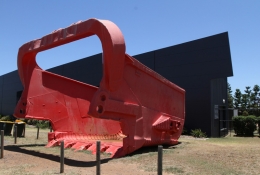 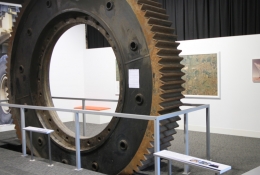 A huge gear in the BICC - a reminder of the scale of the equipment used in open cut mining. 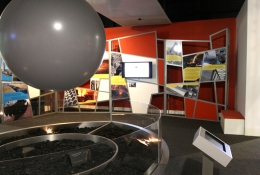 One of the exhibition spaces at the BICC. 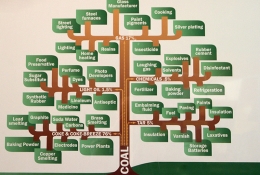 The powerful argument for the vital importance of coal in the BICC. 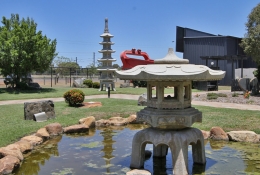 The Japanese Garden next to the BICC. 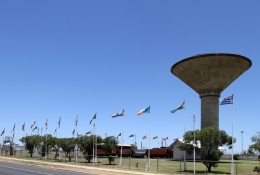 The 37 flags in Lions Park with the local water tower. 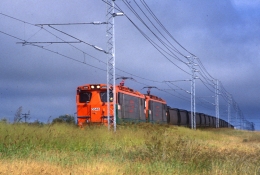 The electric trains that take the coal to the port at Gladstone. 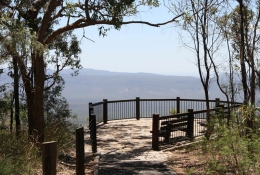 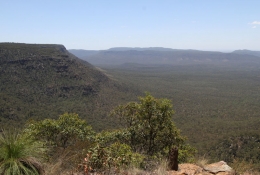