Blanchetown is a tiny township on the Murray River which was an important transportation centre during the nineteenth century. It is now an unusual mixture of historic buildings which date from the 1850s and 1860s, huge holiday homes and temporary shacks built by holidaymakers on the banks of the river. The Murray River at Blanchetown is only 3.6 m above sea level yet it is 274 km from the sea. It is located at Lock 1 on the river.

Blanchetown is located on the banks of the Murray River 144 km north-east of Adelaide.

In 1855, after regular flooding had forced local residents to move from Moorundie, the town was surveyed and named after Lady Blanche, wife of the South Australian colony’s sixth governor, Sir Richard Groves MacDonnell.

Blanchetown Post Office
The Blanchetown Post Office, at 28-30 Egerton Street and listed on the SA Heritage Places Database, is located on top of the hill as the visitor enters the town. It was built in 1865, is a fine example of Georgian-style architecture, and stands as a reminder that once this tiny town was considered as an important stopping point on the road from Adelaide to Sydney.

Blanchetown Bridge
The Blanchetown bridge was opened in 1964 by Sir Thomas Playford. The bridge's main claim to fame is that it was the first major pre-stressed concrete girder highway bridge built in South Australia. It cost £510,000 to build. It replaced the Blanchetown ferry crossing which had been used since 1869.

Lock & Weir No.1
The sign beside the weir, which is easily visible slightly upstream from the town, explains that: "This was the first of the series of locks and weirs that provided year-round navigability for river boats below the junction of the Murray and Darling Rivers.
"Officially known as Lock and Weir No.1, Blanchetown's lock was named for William R. Randell, the Murray's pioneer captain, who first navigated the river in 1853.
"It is the River Murray's longest weir at 168.85 metres and includes a navigable pass and a sluice section, both of which can be opened during floods to maintain water flows. The associated lock allows boats to move from one level of the river to another.
"The foundation stone was laid on 5 June 1915, but because of floods, it was December 1919 before the local valves were opened. The lock was officially opened to river traffic on 5 April 1922. Some 60,000 tons of stone had been used in its construction."

Shack City
It is a comment on the changing nature of the town that, over the past forty years, the fascinating Shack City has been reduced to a few isolated examples and that huge holiday homes (some with seven or eight bedrooms and huge television and games rooms) have replaced this unique escape from Adelaide. When I visited in 1988 I could write: "There is a Blanchetown Shack Owner's Association which, presumably, looks after the interests of all the owners of the shacks in the region. There is a sort of Shack City downriver of the town. It is an extraordinary collection of shacks which have been built out of bits of corrugated iron, fibro and anything which came to hand. The way the houses have been built defies description. They have names like Dad's Den. It is unique and worth seeing. Some of the blocks of land in Shack City have absolute water frontages." When I recently returned most of the shacks had disappeared and they had been replaced, on the bank of the Murray River, by large holiday homes. Look carefully and you will still see a few of the original shacks.

Moorundie and Edward John Eyre
There is now nothing left of Moorundie but the story of its existence is worth telling because it is the true European origin of Blanchetown. Historically it lay approximately 5 km south of Blanchetown on the banks of the Murray. In 1839 the explorer Edward John Eyre took out a Special Survey of 4,000 acres for £4,000 along the Murray at this spot. He had made the money by overlanding cattle to South Australia in 1838. It was a narrow 12 mile stretch of river flats along the banks of the river. By 1842 he had built a simple hut and planted lucerne, corn and wheat on irrigated river flats for fodder for his cattle. He built little weirs and channels to divert some of the river course. He also used a native grass which produced flower heads similar to millet for his horses.
He named the settlement after a local Aboriginal tribe and parts of it were later surveyed and named Sturt after the explorer Charles Sturt. Eyre, attempting to quell the growing conflict between overlanders and local Aborigines, was appointed a Sub Protector of Aborigines in 1841 and a small police presence and barracks were established on Moorundie station. With his £300 a year salary as Sub Protector of Aborigines he built a stone house which he used as a Court House. He also had stone military barracks built for the thirteen soldiers and a Sergeant who were stationed at Moorundie. There were also three policemen. With Eyre’s servants and workmen Moorundie had a population of 43 by October 1841.
Between 1841 and 1856 Moorundie served as an important Aboriginal contact point, rations depot, experimental irrigation settlement and military and police outpost. The settlement also included a port.
Continual flooding (a flood in late 1844 swept away Eyre’s weirs, irrigation channels and crops) eventually put an end to Moorundie and Blanchetown was established high on the cliffs overlooking the river. The site of Moorundie has been placed on the Register of State Heritage Items because of its historical and cultural significance.
There is a stone replica of Eyre's house on The Parade (Egerton Street) opposite Lock No.1, which was built by the school children of Blanchetown.

Brookfield Conservation Park
Located 11 km west of Blanchetown via the Sturt Highway is the Brookfield Conservation Park which was created in the early 1970s as a dedicated habitat for the southern hairy-nosed wombat. It is also home to the fat-tailed dunnart, common dunnart, red and western grey kangaroos and emus. It also has a diversity of birdlife including mallee fowl, Australian ringneck parrots, hooded robins and crested bellbirds along with the rarer stone curlew, ground cuckoo shrikes and Australian owlet nightjars. The countryside is characterised by red mallee, mallee box, yorrell, false sandalwood, oil bush and blue bush. For more detailed information check out https://www.parks.sa.gov.au/find-a-park/Browse_by_region/Murray_River/brookfield-conservation-park.

* Prior to the arrival of Europeans the area was home to the Moorundie Aboriginal people, part of the Meru language group.

* Edward John Eyre, explorer and Protector of Aborigines, surveyed the area in 1839.

* Eyre established the community of Moorundie, south of Blanchetown, in 1841.

* Between 1841 and 1856 Moorundie served as an important Aboriginal contact point, rations depot, experimental irrigation settlement and military and police outpost. The settlement also included a port.

* Continual flooding eventually put an end to Murrundi and the settlement moved upstream.

* Blanchetown was established high on the cliffs overlooking the river. It was surveyed in 1855. It grew as a riverbank port where goods could be loaded on the paddlesteamers.

* The town grew with the arrival of the Customs House in 1856. It dealt with produce which was being sent to Victoria and New South Wales.

* By 1858 a hotel had opened and there was a punt to carry supplies across the river.

* A post and telegraph office was opened in 1865. The town cemetery was also opened that year.

* In 1869 a commercial ferry service across the river was introduced.

* A flood in 1870 swept away Eyre's buildings at Moorundie.

* The government took over the ferry service in 1879. That year saw a state school built in the town.

* An Anglican paddle steamer started mooring at Blanchetown to hold weddings, baptisms and church services in 1891.

* By 1894 a Methodist paddle steamer was visiting the town and holding church services.

* The Paisley Lutheran Church was opened in 1903.

* By 1908 the paddle steamer Pyap was operating as a floating general store and stopping at Blanchetown.

* A second bridge across the Murray was opened in 1963.

There is no Visitor Information in Blanchetown.

There is a lot of useful information at http://www.murrayriver.com.au/blanchetown. 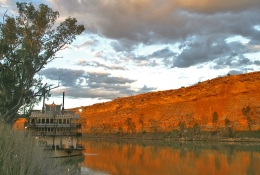 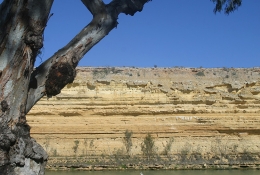 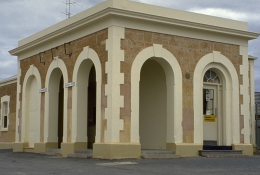 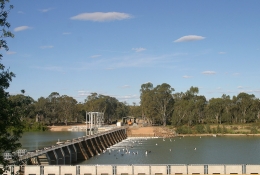 Lock No.1 upriver from Blanchetown 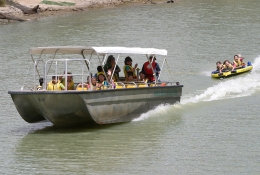 The river at Blanchetown is a popular playground 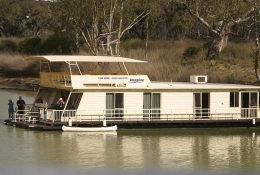 Houseboats are popular on the river 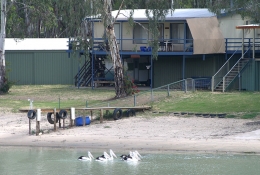 Holiday homes and pelicans on the Murray 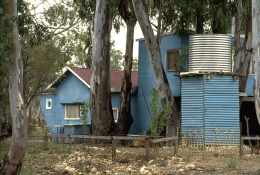 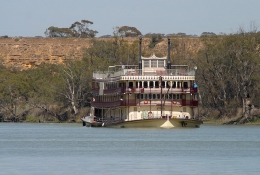 A paddlesteamer on the Murray River near Blanchetown 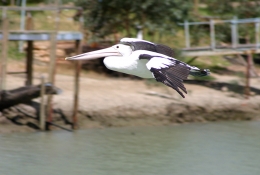 Pelicans fly low over the Murray as they traverse the river