Unusual rural service centre with a strong industrial base.

Blayney calls itself "The Village Shire" because it is a typical rural service centre, a farming town and administrative centre with avenues of deciduous trees that ensure it is particularly attractive in autumn. In recent times Blayney Shire, unlike most rural centres, has developed a strong industrial and mining base.

Blayney is located 237 km west of Sydney via the Great Western and Mid Western Highways. It is 35 km west of Bathurst and 863 m above sea-level.

In 1842 Governor Gipps, then governor of the colony of New South Wales, proposed a town to be named Blayney. It was established the following year.

Viv Kable Museum
Located in the Blayney Shire Library in Adelaide Street, the Viv Kable Museum is a personal collection of historic rural and domestic tools and implements. It is also an ideal location to learn the history of Blayney through original documents. It is open Monday, Tuesday and Thursday from 11.00 am to 1.00 pm and  2.00 pm to 5.00 pm, Fridays from 2.00 pm to 6.00 pm and Saturdays from 10.00 am to noon.

Historic Buildings
Blayney has a number historic buildings of interest - most are in Adelaide Street.
Churches
These include the Presbyterian Church (the 1861 building is now the church hall) the second oldest church in the district after St Paul's at Carcoar. The Christ Church Anglican Church (pre-1890) which is located at the corner of Adelaide and Church Streets.
The Court House
The Blayney Court House is a fine example of a Victorian Collonaded Italianate Pavilion design with a central collonaded veranda. It was restored in the 1890s.
Post Office
The Blayney Post Office was officially opened on 4 September, 1882. It has been radically altered over the years with the original cast iron balustrade and first floor veranda both being removed.
The Blayney Railway Station
Located at the junction of the Main Western and South Western lines, it survives as a testimony to the busy heyday of rail transport. It is a large Victorian structure, with elaborate cast iron decoration.

Lookout
When entering Blayney on the MidWestern Highway from Bathurst turn left into Marshalls Lane, pass Atlantic Civil Products and continue along the unsealed road until you reach the end. There is a fine view over the town, the valley and the Belubula River.

Blayney's Windfarm
When it was built Blayney's Wind Farm was recognised as the largest of its type in Australia. It is impressive and a fine example of the potential of clean energy.

Electricity Produced
Energy generated at 690 volts and stepped up to 11,000 volts then 66,000 for supply into Advanced Energy's transmission grid as green power. The capacity of the wind farm (10 MV) is enough to supply the annual electricity needs of 3,500 average Australian homes.

General
Cost of project: $18 million. Each wind turbine is monitored at a remote location through a communications link.

Cobb & Co's origins lie with the goldrushes of the early 1850s and as the Heritage Trail website explains: "The company was enormously successful and had branches or franchises throughout much of Australia, New Zealand, South Africa and Japan. At its peak, Cobb & Co operated along a network of tracks that extended further than those of any other coach system in the world – its coaches travelled 28,000 miles (44,800km) per week and 6,000 (out of their 30,000) horses were harnessed every day. Cobb & Co created a web of tracks from Normanton on the Gulf of Carpentaria and Port Douglas on the Coral Sea down to the furthest reaches of Victoria and South Australia – in all, a continuous line of 2,000 miles (3,200km) of track over eastern Australia from south to north, with a total of 7,000 miles (11,200km) of regular routes".

The particular interest in Blayney is the Royal Hotel as the original hotel (built around the 1850s) was a changing station for Cobb & Co and the publican, Jacob Russart, was both a Cobb & Co driver and a Mayor of Blayney. Check out http://www.cobbandco.net.au/ for more details and a map which shows all the routes between Bathurst and Bourke.

There is a local tourism site - http://www.blayneynsw.com.au - with extensive information about the town and surrounding district. 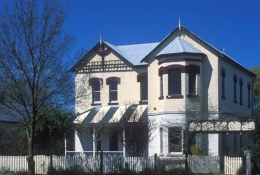 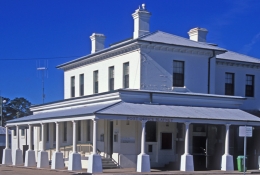 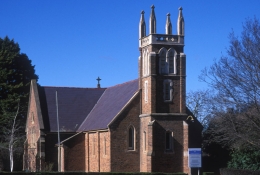 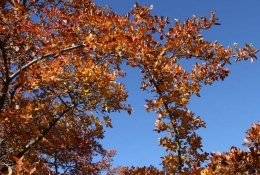 In 2014 the mild weather meant the trees in Carrington Park were only turning by the end of May. 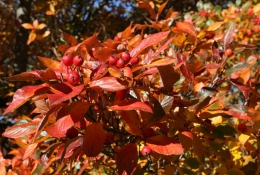