Blinman is a tiny, isolated settlement on the edge of the South Australian desert. One of its enduring problems is its isolation. Even when copper was found, it struggled to transport the mineral economically from the mine to the nearest ports. Today the settlement verges on being a ghost town although there has been a commitment to tourism with the advent of the Blinman Underground Experience in 2011. Still, beyond the mine tour there is little more than a pub and a few houses with the main interest lying in the remnants of the old mines which exist in all their rusted glory.

Blinman is located 510 km north of Adelaide via Port Augusta and Wilpena Pound.

Blinman could have been named Peg Leg which was the nickname of the one-legged shepherd, Robert Blinman, who gave his name to the town. It was an acknowledgement that Robert Blinman had discovered copper in the area in 1859.

Blinman Mines
To the west of Blinman (about 1 km) is the sign out to Blinman Mines. On the hill above the town there are old smelters and bits and pieces of machinery which are remnants of the late 19th century when the town was alive with miners. To get to the top of the Blinman Mine area it is possible to drive in a 4WD or walk.

Blinman Mine Tour - Blinman Underground Experience
In an impressive attempt to encourage tourism the Blinman Heritage Tourist Mine was opened in April 2011. The mine office is located in the centre of town on Mine Road next door to the Blinman General Store. It has historic photos and information and it is also the local visitor information centre. The Blinman underground experience offers an opportunity to go into an historic copper mine. It is a combination of a sound and light system  which includes storytelling, light boxes, music, a mix of theatre and mining history all enhanced by experienced tour guides. From Easter until the end of October tours are offered hourly from 10.00 am until 3.00 pm subject to demand. From October until Easter tours are scheduled at 10.00 am, 12.00 noon and 2.00 pm.They can be booked by filling in the form at http://www.heritageblinmanmine.com.au/contact-us or tel: (08) 8648 4782.

Historic Buildings
Blinman is a very tiny little settlement with a hotel, a post office, a general store and very little else. The Police Station dates from 1874 and the North Blinman Hotel has parts which date from the 1860s. There are three sites listed on the South Australian Heritage Register -
* Blinman Dome Diapir - a geological formation which has been written about extensively.
* Blinman Mine and Manager's Cottage
* Mine Road Dwelling and Dugout

Blinman Cemetery
The Blinman Cemetery lies at the southern end of the town. It is old and dilapidated but it tells a remarkable story of survival with sad graves of women who died in childbirth, of men killed working with explosives near the mine, of little-known explorers like William Kekwick (1872 ) who was the second-in-charge to John McDouall Stuart when he crossed Central Australia.

Miner's Cottage
This miner's cottage, made from weatherboards and a limestone fireplace, dates from 1862. It is an old wattle and daub cottage which is located at the Arkaroola end of Blinman's main street. It is as old as the town.

Chambers Gorge
Chambers Gorge features a pretty waterhole in the middle of the desert ranges between Blinman and Arkaroola. Located about 80 km from Blinman it is truly a desert oasis which not only includes a pool but is suitable for camping and has some excellent Aboriginal rock art. The art exists in one of the gorges off to one side from the main gorge and can be accessed by driving about 8 km up the gorge. At that point you will notice a small gorge to your left. The rock art, which is mostly rock carving, is up that gorge. Check out https://www.southaustralianhistory.com.au/chambersgorge.htm for more information.

Scenic Route from Parachilna
The road between Blinman and Parachilna is particularly beautiful cutting through dramatic desert gorges which are characterised by the harsh, spectacular colours of this part of the outback.

* Copper was discovered at Blinman by a shepherd named Robert Blinman in 1859. Blinman, who had a wooden leg, was known as 'Peg Leg'. The discovery occurred on land owned by a Dr Hayward. Dr Hayward's brother, Paul Hayward, was given some wethers (sheep) to graze on the land. He used to sit on a rock and watch the sheep. Paul Hayward handed the job on to 'Peg Leg' Blinman who one day broke a chunk off the rock and found that it was good quality copper.

* Blinman took out a mineral application in 1860.

* Two butchers in Adelaide, Henry and Thomas Martin, contacted Blinman and by 1861 they had a mineral lease on the land.

* By 1862 the mine was known as Wheal Blinman. It was sold in February, 1862 to the Yudnamutana Copper Mining Company of South Australia.

* In 1863 a hotel and post office were opened in the settlement.

* In total around 10,000 tonnes of copper were removed from the area with most of it being mined in the years between 1903-1918 when the town's population peaked at around 2,000 people.

* The Yudnamutana mine was hugely profitable and eventually was sold to London interests for the staggering sum of £135,000.

* Others also made money but when the mine closed in 1918 it had been an economic failure for the investors.

There is a dedicated local website. Check out http://www.blinman.org.au for information about accommodation and services. 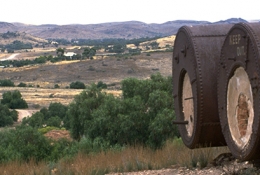 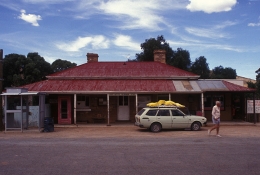 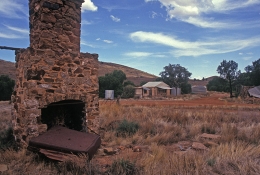 Ruins of the old town at Blinman 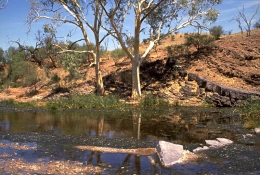 Chambers Gorge between Blinman and Arkaroola 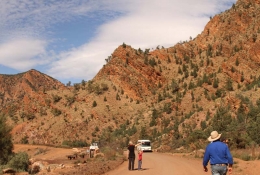 Parachilna Gorge on the way to Blinman. 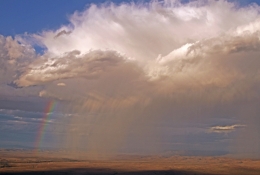 Storm and rainbow over Blinman