Boat Harbour is idyllic. It is not only the most beautiful place on the north coast of Tasmania but one of the most beautiful and unspoilt beaches in Australia. The holiday village, located on the side of a gentle hill which tumbles down to a pure white beach with rocky headlands on either side, looks like an advertisement for paradise. The sea is intensely green and blue, the beach so clean, the rolling hills are green and fertile, and the village is sleepy and peaceful. Boat Harbour Beach is famed for its fine white sands which have been weathered from the quartzite rocks which are common along this section of the coastline. The beach is firm and clean and the offshore waters are ideal for diving. The village exists in a micro climate where frosts are unknown and plants from the tropics grow in the local gardens.

The name Boat Harbour is actually abridged from its original name - Jacob's Boat Harbour. There is some argument about who exactly 'Jacob' was but it is likely that it was Captain John Jacobs who regularly sailed a schooner named Edward from Stanley to Launceston for the Van Diemen Land Company.

The Parks Tasmania website is fulsome in its enthusiasm for the flora in the park: "Coastal heathlands, which dominate the hillier parts of the park, contain hundreds of different plant species, many of which flower colourfully in spring and summer. Heath is frequently found on poorer soils, such as those here, which result from the weathered quartzite. The plants are generally low-growing and wind, salt and fire-tolerant. In fact some plants, including many of the 40 orchid species found here, lie dormant underground until fire passes over them.

"Wind is another crucial factor. Plants such as wattle and she-oak, which elsewhere are taller and even tree-like, become ground-hugging in these wind-swept heathlands. Spread amongst these are many wildflowers such as purple iris, yellow guinea-flower, white-flowering tea tree, pink and white epacris, boronia and the spectacular Christmas bell which flowers from November to February. Xanthorrhoea, with its grass-like skirt and tall flower spike, is also very common throughout the park.

"In areas more protected from fire and wind, pockets of trees emerge from the heathland. Small clumps of forest can be found in gullies on the south and east-facing slopes, such as those around Doone Falls. These mini-forests contain eucalypt, wattle, paperbark and banksia, as well as plants more commonly found in wet forest.

"One other outstanding plant community is the stand of saw banksia in the hills overlooking Sisters Beach. This giant of the banksia family is restricted to this small part of Tasmania, though it is common in mainland Australia. See if you can see any young banksias here. They require fire to open their seed pods before regenerating. A lack of seedlings may indicate a lack of recent fire."

Rocky Cape was named by Bass and Flinders when they passed along the coast in 1798.

Today it remains an excellent record of Aboriginal habitation with the middens along the coast indicating that the local Tommeginne people lived on seals, fish and shellfish supplemented by land-based animals and edible plants including ferns and grass trees.

The park is of interest to bush walkers who are offered a variety of walks including the old Postman's Track (first used by the Van Diemen's Company) which runs down to Sisters Beach and the walks around Rocky Cape where 'The Nut' at Stanley is clearly visible from the lighthouse.

The walk down to the North Cave brings the visitor to a cave which has evidence of an ancient Aboriginal settlement. It is the site of an important Aboriginal midden and is protected from damage by a walkway. For more details check out http://www.parks.tas.gov.au/index.aspx?base=3698 which includes a map and a list of activities.

Walks in the Area
There is an excellent, downloadable brochure Backyard Walks of Waratah-Wynyard (https://www.warwyn.tas.gov.au/facility-type/trails) which details walks in the area around Boat Harbour and Wynyard. These include:

2. Sisters Beach - Postmans Track - 3.7 km, one hour one way walk along an elevated track with views over the coast

4. Boat Harbour - Shelter Point - is a short 800 metre walk out to the point with fishing and diving possible from tracks leading off the main walk.

* Prior to the arrival of Europeans the area had been inhabited for around 8,000 years by members of the Tommeginne First Nation language group.

* The first Europeans in the area were Bass and Flinders who, in 1798, sailed along the coastline.

* Boat Harbour was first settled by Europeans in the 1830s. At the time it was known as Jacob's Boat Harbour. It was probably named after a local sailor, Captain John Jacobs, who sailed the schooner Edward along the north coast from Stanley for the Van Diemen Land Company.

* In 1866 the Lands Department surveyed the town.

* By the end of the 19th century a small jetty had been built and produce, particularly potatoes, was being shipped along the coast to Burnie and Devonport.

* The first permanent shack in the area was not built until 1917.

* By the 1920s Boat Harbour was becoming a popular holiday resort.

* Today it is a tiny settlement with holiday accommodation which has excellent views across Bass Strait.

There is no visitor information at Boat Harbour. The closest is the Wynyard Visitor Information Centre, 8 Exhibition Link, Wynyard, tel: (03) 6443 8330. 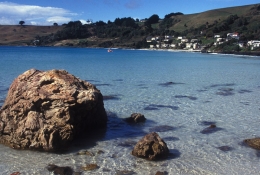 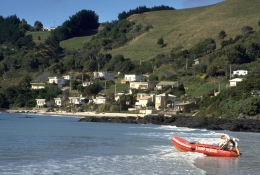 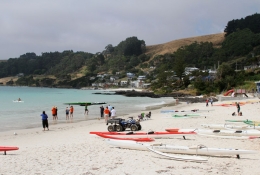 The beach at Boat Harbour is alive with activity in the summer months. 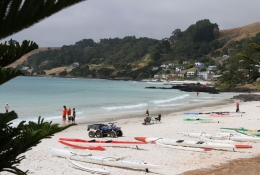 The beach at Boat Harbour. 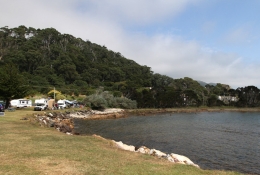 Camping on the shoreline is popular in summer. 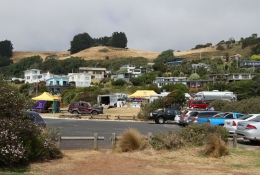 Holidays houses above the car park at Boat Harbour.