Quiet mining and rural service town on the Hotham River

Boddington lies between rolling hills on the banks of the Hotham River. The small rural service centre is surrounded by farming, gold and bauxite mining and a State Forest with impressive stands of jarrah and marri. It is an area ideal for hiking, camping, picnics, birdwatching and wildflowers in spring.

Boddington is located 131 km south-east of Perth via the Albany Highway.

Henry Boddington, a local shepherd, was honoured by the naming of the town when it was gazetted in 1912.

Places of Interest
There is a suitably detailed downloadable brochure (http://www.boddington.wa.gov.au/Profiles/boddington/Assets/ClientData/Town_map_-_points_of_interest_for_tourists_walking_around_town.pdf) which provides a clear map and descriptions of the twelve places of interest (all within easy walking distance) around town including the school, old police station, Town Hall, Roads Board, Hotel and Cottage Hospital. This is a new town and consequently few buildings are of genuine historic interest.

Len Zuks Sculptures
Len Zuks is a well-known Western Australian artist and sculptor. There are a number of his works around Boddington and to see them the visitor merely has to walk down the main street and then head towards Hotham River. The most prominent is the unusual sculpture of a knight on a horse (known as the Halberdier) outside the local council chambers on Bannister Street. There is also, further along the street, a lifesize rodeo horse and rider to celebrate the town's annual rodeos; and a series of silhouette sculptures which includes mine workers in the main street and railway workers on the back of a railway carriage near the Hotham River.
The sign on the rodeo rider notes that the "Worsley Boddington Bauxite Mine and Boddington Gold Mine acknowledge the efforts of the community and in particular the members of Boddington Lions Club in establishing and continuing to conduct the annual Boddington Rodeo since 1997. This sculpture by Len Zuks was donated by the Mining Companies to the Shire of Boddington in recognition of an initiative that has contributed significantly to the community."

Hotham River, Lions Weir and Ranford Pool Walk Trail
The Lions Weir, built by the local Lions Club in1980 to dam the Hotham River, has created a pleasant stretch of water which the locals use for fishing and canoeing. The park on the shores is ideal for BBQs and picnics. A fish ladder - a series of rock pools - was built to enable fish to swim upstream during the spawning season.
A 2 km walk trail starts from the Lions Weir and traverses the Hotham River foreshore to the historical Ranford Pool. The water hole was created when the Tannin Factory was operational in the early 1970’s, and has become a popular local swimming hole. The walk trail is signposted with boards identifying the different bird species and fish species which live in and beside the river. Fishing in the Hotham River can be rewarding in spring and autumn when redfin perch, cobbler and freshwater marron are in abundance.

Bauxite Rock
There is a large piece of bauxite in the park in the park beside the Hotham River. The sign points out that "Bauxite is a weathered rock from which aluminium oxide of alumina is extracted at a refinery. Alumina is then used as feed to a smelter to produce aluminium metal. It takes many millions of years of physical and chemical weathering and leaching of suitable near-surface rocks to form bauxite. Boddington bauxite has 30-32% extractable alumina - the remaining minerals are mainly iron oxides. The Boddington Bauxite Mine commenced operations in 1983 at a rate of 4 million tonnes per year. By 2000, production had expanded to 12 million tonnes per year. All the bauxite mined at Boddington is conveyed to the alumina refinery at Worsley, via the world's longest overland conveyor belt. This rock is a piece of 'hardcap' (the top layer of the bauxite) which has been diamond cut and polished for display."

Grave of Quency Dilyan
Located on the Bannister- Marradong Road approximately 5 km south of Boddington, clearly marked by a roadside sign, is the lonely grave of Quency Dilyan, an Aborigine who helped John Forrest and H. S. Ranford on their expeditions. Dilyan lived with his tribe in the Wandering - Williams area, although he spent the last year of his life in Boddington. It is well hidden. Follow the yellow walker signs for about 200 metres into the bush and you will see the lonely, isolated grave.
Monument Australia notes: "Dilyan an aboriginal, belonged to a tribe, which lived within the boundaries of Wandering and Williams. Dilyan travelled with explorer, Sir John Forrest and was so highly regarded that he presented him with a silver mounted and inscribed fowling piece (gun), as well as naming a spring at the Cambridge Gulf in the North-West of Western Australia after him. Dilyan, rendered sterling service on a survey expedition, led by Mr. R.S. Ranford, which visited Cambridge Gulf in the 1880`s and marked out the town of Wyndham, as well as effecting other important surveys. B.S Ranford and Jack Dowsett later employed Dilyan as a shepherd for his notable tracking skills. Charlie Farmer was later informed of his performance and likewise, employed him." He was an admired tracker and known for his bravery. Dilyan was killed by local Aborigines in 1886 as the result of a long-standing feud between two local tribes. Check out http://monumentaustralia.org.au/themes/people/indigenous/display/60116-quency-dilyan for more details.

Tullis Bridge, Tullis Rail Trail and Tullis Bridge Walk
Tullis Bridge is located  9 km from Boddington via Farmers Avenue. The drive offers some superb scenery and passes the local bauxite mine, Marradong Reserve, olive groves and orchards. The timber trestle railway bridge was built in 1912 to link Pinjarra to Narrogin and was used by the timber industry up until 1968. Tullis Bridge now remains as two separate structures. It was destroyed in 2009 by campers who lit a campfire on it.
A Rail Trail links Boddington to Tullis Bridge along the Rail Reserve and is 16 km return. It passes along the river, through open paddocks and timber reserves.
A 3 km loop bridge walk trail starts at Tullis Bridge, meanders through bushland and returns along the Hotham River to the bridge. There is an excellent and detailed map and instruction relating to the walk trail. Check out https://www.visitpeel.com.au/images/documents/Brochures/MAPTO-2328-TrailMap-Tullis-Trail-v5.pdf.

Boddington Bauxite Mine - South 32 Worsley Alumina
Lying to the south of Boddington, on the Pinjarra-Williams Road and lying beyond the road, is the Boddington Bauxite Mine. There are a number of interesting and informative signs which are an alternative to an actual view of the mine site. The information includes:
South 32 Worsley Alumina is one of the largest bauxite mining and alumina refining operations in the world. We are a joint venture between South32 (86 per cent), Japan Alumina Associates Australia Pty Ltd (10 percent) and Sojitz Alumina Pty Ltd (4 percent) ... Bauxite is one of the most abundant ores in the earth's crust. The Darling Ranges of Western Australia contain long-life reserves that are easily accessible through surface mining. The Worsley mining lease encompasses about 2,700 square kilometres of Crown land and private property on the eastern edge of the Darling Range, stretching from the Brookton Shire in the north to the Collie Shire in the south. We have an estimated bauxite reserve life of 50 years ... about 3.3 tonnes of our bauxite produces 1 tonne of alumina ... The Boddington Bauxite Mine has more than 300 employees and permanent contractors ... our dump trucks carry 150 tonnes of bauxite each load."

Marradong
Lying 12 km south of Boddington off the Pinjarra-Willliams Road is the tiny settlement of Marradong. Today it is literally nothing more than tiny St Albans Anglican church (1894), the old agricultural hall and some palms which once stood outside the local hotel. The church has jarrah flooring, a tin roof and old kerosene lamps (now wired) hanging from the roof trusses. It has not been used for services since September 2012. The cemetery lies  behind the church and has views over the surrounding countryside.

* The Boddington area was settled in the mid-1860s and grew slowly to become well known for its wool and wheat production.

* The Marradong Roads Board was gazetted in 1892.

* The town itself was gazetted in 1912 (it was named after a local shepherd, Henry Boddington) when the railway line arrived in the district to meet a demand which had been created by the local timber industry.

* The Boddington District Hospital was built in 1943.

* The local Road Board became a Shire Council in 1961.

* The town declined slowly and by 1969 the railway had been closed and it had retreated to being a typical small service area for the surrounding district.

* Its recent revitalisation saw the establishment of a bauxite mining in 1979.

* The Boddington Gold Mine was established in 1986.

* These two events - bauxite and gold mining - turned a small rural community into a thriving mining town in less than a decade.

There is a useful overview of the town at http://www.boddington.wa.gov.au. 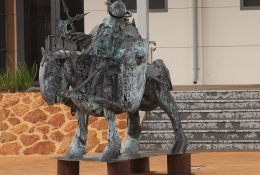 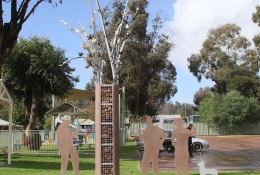 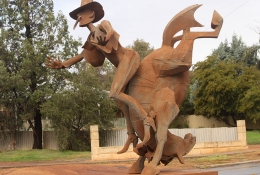 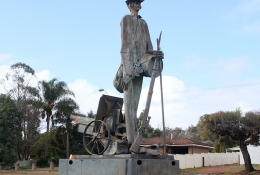 Len Zuks sculpture of a soldier in the main street 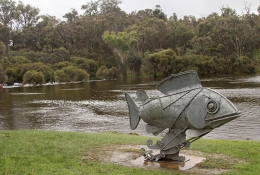 The fish sculpture beside the Hotham River near the Lions Weir 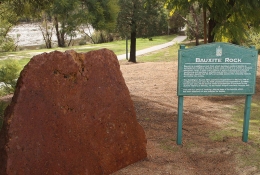 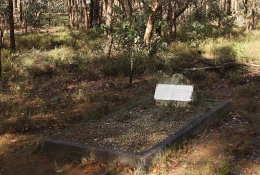 The grave of Quency Dilyan 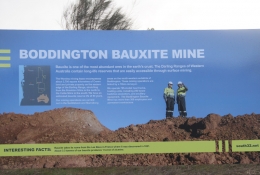 There are no tours of the Bauxite Mine. Just these interesting signs.