Boggabri is a quiet rural service centre located by the Namoi River. It is slowly in decline because of its proximity, only 39 km, to the larger centre of Gunnedah. The surrounding district produces wheat, wool and cotton. Consequently the town is defined by its large grain-holding facilities. The main attractions are a short historic walk through the centre of town; the remarkable rocky outcrop to the north known as Gin's Leap; and the small, but interesting, local museum.

It is claimed that the town's name is an Anglicised version of a local Kamilaroi Aboriginal word meaning "the place of many creeks".

Boggabri Heritage Walk
There is a Boggabri Heritage Walk which lists a total of 42 places of interest (many of them are only sites rather than actual buildings) in the centre of Boggabri. It can be downloaded at http://www.visitnarrabri.cfm.predelegation.com/files/uploaded/file/Information%20Leaflets/BOGGABRI%20HERITAGE%20WALK.pdf. The places of greatest interest include:

1a - Museum - 25 Brent Street
The Boggabri Museum is located in Brent Street, two blocks west of the Royal Hotel. It is open Saturday mornings from 9.00 am - 12.30 pm or by appointment, tel: Phillip Haire on (02) 6743 4761. He lives around the corner from the Museum. The present building was completed around 1950 and for many years housed a Wool & Hide dealer.
5 - First Catholic Church
This small wooden building was constructed in 1886 and was the first Catholic Church in the town. It was used as a church and school until 1918. It is located at the north-eastern corner of Laidlaw and Caxton Street.
6 - Post Office
Located at 81 Rees Avenue this site has been the town's post office since 1867. In 1881 the present Post Office was built. It operated as the town's telephone exchange until 1985 when the service was automated.
7 - Court House
The first Court House on this site was built in 1877. This modern Court House was built in 1934 and continued to be used for that purpose until 1974. It is located at 32 Brent Street.
8 - Royal Hotel
Located on the corner of Brent and Laidlaw Street the Royal Hotel was completed in 1909 and remains largely the same as when it was built. Conway's Centennial Hall was erected on the northern side of the hotel and was, for many years, the town's main venue for dances and functions.
12 - Bank of New South Wales
Around 1896, when it was "metalled", the town's main street shifted from Laidlaw to Merton Street which was why, in 1921, the Bank of New South Wales was built on the corner of Merton and Dalton Streets. It continued to serve as a bank until 1958 when it became a newsagency.
17 - Commercial Bank Building
One of the most impressive buildings in Boggabri, 135 Merton Street was built by the Commercial Bank of Sydney in 1926. The bank continued in the building until 1984 when it became the National Bank of Australia.
20 - 134 Merton Street
Built in the 1880s, by 1895 this building was housing the offices of Jacob & Anderson, one of the town's first Stock and Station agents. It still operates as a real estate office.
23a - World War I Monument
Unveiled in 1929 by Lord Stonehaven the Governor General at the time, this granite monument records the 29 men from the area who were killed in the war. It now includes World War II, Korea and Vietnam. It is located on the corner of Merton and Brent Street,
23b - Horse Trough
A reminder of times past, the horse trough on Merton Street was used to water the horses which brought children to the local Primary School.
24 - Isaac Perlman's Store
Located on the corner of Brent and Wee Waa Streets this building has been classified by the National Trust. The interior of the building has changed little since1908 when the drapery and mercery sections were located on the east side.

Gin's Leap
Gin's Leap is a rocky escarpment, 4 km north of the town on the left-hand side of the Narrabri Road. There is a picnic area and an interpretative sign at the site where the Rock Inn once stood. Used as a coaching stopover the Rock Inn was built in the early 1850s before Boggabri existed. There is a very detailed sign which explains: "History of Gin's Leap - As is the case with much of Australia's early history, the flickering details of the Gin's Leap story, have been passed down over the years by word of mouth, and have, of course, varied much in their content.

"The best known story is that a young Aboriginal girl, promised to an elder of her tribe, the Kamilaroi, ran away with a young aboriginal man from another tribe. Hotly pursued by Kamilaroi tribesmen, the lovers jumped to their death from somewhere along the top of the rock.

"The historic Rock Inn, built by Mr. Baldy Adams, was originally to have served the hospital. However in 1854 he changed his plans and it opened as the Rock Inn, Namoi River, an important stopover point for the bullock teamsters and Cobb and Co coaches. The inn was then situated on the northern side of Main Road 72, between the Namoi River and the road and traded until 1875.

"The best remembered operators of the inn were Mr. David Grover (whose descendants still live in the Boggabri district), his wife Maria and family. It is reported that adjoining the Inn also operated a store which was well stocked with all descriptions of drapery, hosiery and grocery of every article for domestic use at the lowest price. The Grover family had a home on the southern side of the now main road, very close to where this sign stands. Parts of an old outside lamp from the Inn are housed in the Historical Museum in Brent Street, Boggabri. The four people buried in the vault on this site are Mrs Russell, her 2 year old son, John James and Mr. David and Mrs. Maria Grover. Mrs. Russell, the 21 year old daughter of Mr. and Mrs. Grover, and her husband James, conducted an inn at Mungindi. An unfortunate accident occurred involving the handling of bulk spirits in the cellar one evening with them igniting from an open slush lamp of that period. Mrs Russell and her son received fatal burns in the inferno which resulted. The child died on the day of the fire, October, 3rd, 1866. Mrs Russell died 2 days later on October 5th, 1866."

Manilla Road
Located between Gin's Leap and Boggabri, the Manilla Road heads eastwards across the Namoi River via the Iron Bridge (1883). To the left is Barber's Pinnacle and to the right is Barber's Lagoon. A plaque at Barber's Lagoon notes the approximate spot of the hut and stockyards established by escaped convict, George 'The Barber' Clarke, who inhabited this area from 1826-1831, living with the Kamilaroi peoples who, according to rumour, regarded him as an Aborigine returned from the dead. He acquired two Aboriginal wives, underwent body initiation rites and adopted the language, dress and customs of the group.

Large stocks of cattle were taken to the Liverpool Plains for pasturage from 1827 and Clarke turned to cattle rustling. When times were hard he surrendered to the authorities but again fled to be with the Aborigines. He then turned to bushranging, was captured in 1831, escaped, was recaptured, escaped again and was finally recaptured, after which he was marched 210 km to Sydney and transported to Norfolk Island. He was hung in Tasmania for further offences in 1835. Clarke's account of the Namoi River and his tales of an enormous inland sea prompted the acting governor to send Thomas Mitchell on an expedition into the district, thereby opening the area up to settlement. 8 km along the Manilla Road is a road which passes through Leards Forest where the Tarrawonga Mine and the Boggabri Mine operate. There is a public fossicking area where thunder eggs and agate can be found. Before travelling to the area check at the Boggabri Museum, tel: Phillip Haire on (02) 6743 4761.

Dripping Rock
Located 35 km from Boggabri (take the turn onto Manilla Road south of Gin's Leap and turn into Blair Athol Road after 13 km), Dripping Rock is surrounded by melaleucas and is a semi-circular cliff above a small pool. Water falls 50 metres and drips through the sedimentary rock. If there is enough water the pool is ideal for swimming and the area around the pool is perfect for bush picnics and particularly rewarding for birdwatchers.

Pilliga Scrub
The Pilliga Forest, also known as Pilliga Scrub, is a remnant of semi-arid woodland area which covers more than 500,000 ha to the west of Boggabri. Although the area is now dominated by cypress pine (reputedly the largest cypress pine forest in the Southern Hemisphere) it also has over 900 plant species which, inevitably, means it is spectacular in spring and summer and has a rich collection of fauna and flora including colonies of koalas, over 50 varieties of reptiles, squirrel gliders, bettongs and Pilliga mice. It is believed that before the arrival of Europeans the area was lightly timbered. Today the forest is criss-crossed by 2,700 km of roads, many are old Forestry roads. It is an ideal location for bushwalking and birdwatching. Information can also be obtained from the Narrabri Shire Visitor Information Centre, Newell Highway, Narrabri, tel: (02) 6799 6760 - and there is the excellent Pilliga Forest Discovery Centre at Baradine. Check out http://www.nationalparks.nsw.gov.au/pilliga-national-park for the range of activities in the park which include the Sandstone Caves Walking Track and Sculptures in the Scrub.

*  It is known that escaped convict George 'The Barber' Clarke roamed through the area from 1826-1831 and was accepted by the Kamilaroi people. Clarke was living in a bark hut by the Namoi River when Allan Cunningham encountered him during a voyage of exploration in 1827.

* Allan Cunningham's positive account of the Namoi River prompted the authorities in Sydney to send Thomas Mitchell on an expedition into the district in 1831-1832.

* The first squatter in the district was Edward Cox who arrived in 1835. He called his place the Namoi Hut after the building he erected on what is now the hospital hill. His name is on the creek which passes through the town.

* The location became a popular place for teamsters and bullockies and consequently both a store and blacksmith's were established.

* The townsite was officially surveyed in 1859. The surveyor, C. Flide, drew up the street plan at this time.

* Boggabri was formally gazetted in 1860.

* The first land sales in the town occurred at the Police Office in Gunnedah on 31 December, 1861.

* A police station and school were operating by 1873.

* The town's first church building was completed in 1877.

* By the early 1900s the district was a major producer of wool and wheat and had a number of productive timber mills.

* By the early 1900s the district was known as a premier beef, lamb, wheat, barley, corn and cotton producer. 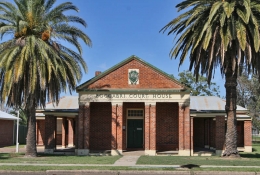 The town's relatively modern Court House built in 1934 on a site which had been used for a court house since 1877. 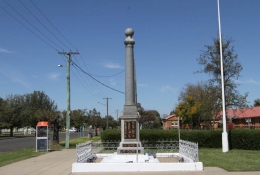 The granite monument to soldiers who fought in World War I was unveiled by the Governor General in 1929. 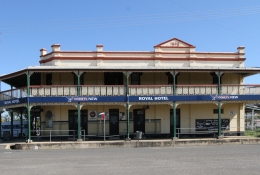 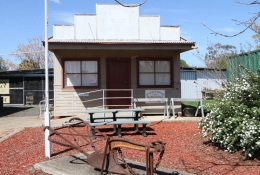 The Boggabri Museum in Brent Street. 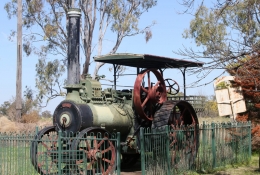 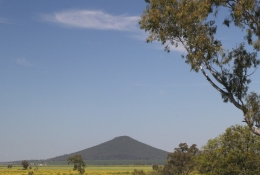 The distinctive pyramid-shaped hill to the south of the town. 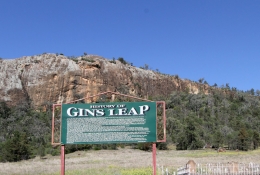