Bonalbo and Old Bonalbo are two small rural towns on the NSW Northern Tablelands. Their appeal lies in their unspoilt bushland surroundings in the Upper Clarence River Valley. The district is an ideal spot for fishing, swimming, canoeing, birdwatching and camping. The town is a service centre for the surrounding beef cattle, hardwood timber, soybean and olive growers and farmers.

Bonalbo is located 761 km north of Sydney via the New England Highway and the Bruxner Highway. It lies 98 km east of Tenterfield and 69 km west of Casino.

The district surrounding Bonalbo was inhabited by the Gidabal, a dialect group of the Bundajalung people, prior to the arrival of Europeans and it is from their language that the town's name,  'bunawalbu' meaning 'bloodwood tree', is derived.

Yabbra State Forest and Bean Creek Falls
The highlight of the area is the drive through the Yabbra State Forest which has some of the most beautiful eucalypt scenery, combined with the glorious sounds of bellbirds ringing in the canopy, that you will find anywhere on the north coast. There are rainforest walks designated starting from the road.  A bonus of this drive north to Urbenville is the clearly signposted Bean Creek Falls. They are located 700 metres down a dirt track. There is a small parking area near the falls. The falls are a sacred Gidabal place and the viewing platform is located down a short track.

Bird watching
The district is known for its remarkable diversity of wildlife. Bird watchers can expect to see bowerbirds, brush turkeys, honeyeaters, lorikeets, owls, wedge-tailed and white breasted sea eagles, and waterbirds including the jabiru, black swan, pelican and spoonbill. In autumn there are black cockatoos; in spring dollar birds, channel-billed cuckoos and spangled drongos; and, in summer, king parrots. There is a list of the birds that can be seen in the district at http://www.bonalbo.com.au/index_files/Page337.htm

* Before European settlement the Gidabal people, a dialect group of the Bundajalung, lived for tens of thousands of years in the district.

* The first European settler in the area was John Donald McLean, a Scots settler from the Isle of Skye who, in 1841 only four years after arriving in Sydney, drove sheep  from the Hunter Valley to the Bonalbo district where he established the 'Bunalbo' or Duck Creek run. In 1848 he moved to the Darling Downs where he became a prosperous pastoralist. In 1853 he sold Bunalbo to the Robertson family who built Bonalbo homestead (c.1862). By 1868 he had interests in more than fifty properties. In 1866 he became treasurer of Queensland.

* A Donald McLean (no relation), who worked for John Donald McLean, took up land in the district in the late 1840s. In 1887 he took ownership of part of the old Bunalbo station.

* In 1887 another Scot named Donald, Donald McIntyre, took up a section of the old Bunalbo station but by the 1890s, as a result of a national depression, he sold out to Paddy McNamee. The town of Bonalbo slowly grew on the banks of Peacock Creek, and in 1911 land was purchased from McNamee and a number of buildings (some built and owned by McNamee) formed the basis of the town.  There was a butcher's shop, hotel, billiard hall, post office, St Andrew's Presbyterian Church (not surprising given the number of Scots in the valley), a school, a boarding house, a blacksmith's, a bank, a general store and a butter factory.

* By the 1880s cedar cutters had moved into the valley.

* By 1910 there were about 100 selectors in the district. The land was difficult being densely timbered and with no proper roads. The selectors tended to engage in mixed farming with a mixture of beef cattle, dairying and pig-raising. 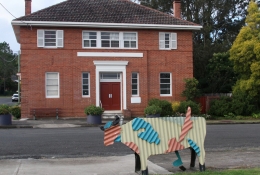 The corrugated iron cow in the main street of Bonalbo. 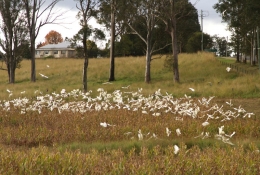 Cockatoos in the paddocks to the north of Bonalbo. 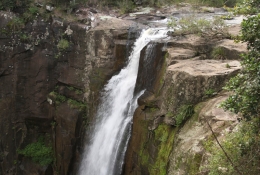 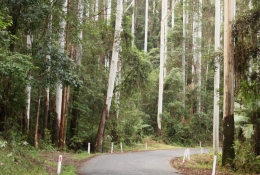 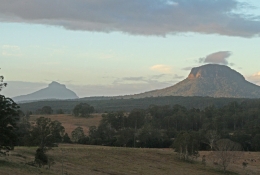 Toonumbar National Park between Bonalbo and Urbenville with Mount Lindesay in the distance.