Spectacular gorge and fossil area south of Gulf of Carpentaria.

There is a true outback magic about Boodjamulla (Lawn Hill) National Park. Here, hundreds of kilometres from any towns, is a place of beauty and peacefulness that is overpowering. To canoe up the Lawn Hill Gorge, which is edged by cabbage palms, pandanus, eucalypts and water lilies, and then to dive into the clear waters at Indarri Falls, is a reminder of the pristine perfection of this seldom-visited wonderland.
The highlight of Boodjamulla (Lawn Hill) National Park is the outstanding, 60 metre high Lawn Hill Gorge which has been occupied by Aborigines for at least 30,000 years. Erosion, caused by a subterranean creek, has created a beautiful oasis of clear water, red rocks and verdant vegetation. Canoes are available for hire and there are some beautiful swimming spots along the river.
Situated within the remote north-west highlands of Queensland, the park includes the gorge, sandstone ranges and World Heritage fossils.
Boodjamulla (Lawn Hill) National Park lies on ancient sandstone of the Constance Range, between the Barkly Tablelands to the south-west and the black soils of the Gulf Savannah Plains to the east. Lawn Hill Creek and the Gregory and O'Shanassy rivers flow all year round, providing a powerful contrast to the dry, parched landscape during the dry season.

The park is named after Lawn Hill Creek. No one is sure who first used Lawn Hill but it has been applied to the creek, the station (Lawn Hill Station), the gorge and the park. It was first used in the 1870s.

Lawn Hill National Park
The Boodjamulla (Lawn Hill) National Park in north western Queensland covers an area of 282,000 ha which includes the sublime Lawn Hill Gorge, significant fossil fields particularly at Riversleigh, and extensive areas of dry savannah grasslands. The highlight of the park is the 60 metre high Lawn Hill Gorge which has been occupied by Aborigines for over 30,000 years. It is an oasis of clear water, red rocks and verdant vegetation. There waters are inhabited by freshwater crocodiles (which are not known to attack people), the area is rich in birdlife and wildlife, and there is a memorial to a police sergeant who was shot and killed while pursuing bushranger Joe Flick in 1889. The flora around the gorge includes pandanus, cluster figs, Leichhardt trees, ghost gums, cabbage palms and large paperbarks.
There are a number of excellent walking tracks in the park. There is a downloadable map at http://www.npsr.qld.gov.au/parks/boodjamulla-lawn-hill/pdf/lawn-hill-tracks-map.pdf. The walks include:
* Island Stack, 4km return, difficult (steep ascent and descent) which offers impressive panoramic views of the surrounding area.
* Cascades, 2 km return, (easy) - an easy walk to the Cascades.
* Wild Dog Dreaming, 4.5 km (easy) - a walking track to an important cultural place with ancient rock art and stone engravings.
* Duwadarri lookout, 600 m (moderate) - a short, strenuous walk up the steep ridge to a lookout with views over the gorge. You can continue onto Indarri Falls.
* Constance Range, 4 km, (moderate) - walk to the Constance Range for panoramic views.
* Indarri Falls, 3.8 km, (moderate)- a loop walk to the falls and back via the gorge rim.
* Upper Gorge, 7 km, (difficult) - a loop walk including spectacular scenery of the upper gorge and a stroll back along the creek .

Riversleigh Fossil Fields
Riversleigh Fossil Fields (the D Site, as it is known) has been a World Heritage Site since 1994 but can be a disappointment to anyone other than a palaeontologist with a pick and shovel. If you go expecting to see impressive examples of 25 million year-old fossils of exotic fauna all you will inspect is a tiny remnant of the limb bone of a freshwater croc, a small piece of a turtle shell and the drumstick of some ancient avian known by the less-than-scientific name of “Big Bird”.
For example (see the fossil photos attached) the explanation is: "This circular fossil is the cross section of a limb bone of a semi-terrestrial freshwater crocodile. These crocodiles lived and preyed along the rivers and lakes of ancient Riversleigh. They used their huge blade-like teeth to kill their prey." The famous Riversleigh fossils of giant pythons, carnivorous kangaroos and marsupial lions are nowhere to be seen. They have been moved to distant museums and the Riversleigh Fossil Centre in Mount Isa. Common sense says - make sure you visit the Fossil Centre in Mount Isa before or after going to Riversleigh.
There is an 800 m walk around the outcrop which offers opportunities to see the few fossils that are still left on the site. Check out https://www.npsr.qld.gov.au/parks/boodjamulla-riversleigh/about.html for details.
It is worth noting, as National Parks point out, that "The World Heritage area was inscribed for its outstanding natural universal values. It is one of the most significant fossil deposits in the world and the richest known fossil mammal deposit in Australia. It has revealed records of Gondwanan life forms which existed prior to the break up of this ancient continent." It is located 55 km south-east of Adels Grove and the fossil fields are now incorporated into Lawn Hills National Park.

Adels Grove
Located just off the main Lawn Hill Road, Adels Grove is 10 km from Lawn Hill Gorge and 50 km from the Riversleigh Fossil fields. It covers an area of 30 ha and was established by French botanist Albert de Lestang in 1920 as an experiment in the growing of tropical fruits and trees. de Lestang achieved remarkable things - there are still 536 samples of his seeds at the Botanical Gardens in Brisbane and he supplied gardens around the world. Sadly in the 1950s a fire destroyed his records and much of his work and de Lestang retreated to Charters Towers where he died in 1959.
Today Adels Grove is the hub of activity associated with Lawn Hill Gorge. It has an airstrip, a guide service, a shop and licensed restaurant, fuel, quality tented accommodation and a caravan and camping site. It organises tours of the area (http://adelsgrove.com.au/tours) which include "Sunset on Harry's Hill Tour", "Half Day Tour of Lawn Hill (Boodjamulla) National Park", Riversleigh (Miyumba) Half Day Fossil Field Tour" and "Cruise Lawn Hill Gorge". All tours run from 1 April to 1 October - check out http://adelsgrove.com.au or tel: (07) 4748 5502.

* The red sandstone which characterises Lawn Hill Gorge was laid down in a shallow sea some 1560 million years ago.

* Prior to the arrival of Europeans the area was home to the Waanyi Aboriginal people for at least 17,000, and possibly, 30,000 years.

* The first Europeans to reach the area were Burke and Wills who passed through on their ill-fated expedition to the Gulf of Carpentaria in 1861.

* By 1862-1863 search parties were looking for Burke and Wills and Frederick Walker, one of the many searcher-explorers, passed through the area and helped open up the whole Gulf area.

* By the mid-1860s a number of pastoralists had moved into the area. They remained for only a short time because Gulf Fever decimated the Europeans around Burketown.

* In 1976 the Brazilian "cattle king" Sebastiao Maia took over the Lawn Hill lease. By this time the property was 11,000 square kilometres.

* In 1984 Adels Grove was opened as a camping ground near the National Park.

* The Riversleigh and Musselbrook areas were included in the park in 1992.

* Today 50% of the Lawn Hill Riversleigh Pastoral Holding Company is owned by the Waanyi Aboriginal people.

Check out http://adelsgrove.com.au for cabins, camping and caravan sites.

There is a licensed restaurant and takeaway shop at Adels Grove. Check out http://adelsgrove.com.au.

The National Parks has a detailed and useful website. Check out http://www.npsr.qld.gov.au/parks/boodjamulla-lawn-hill/culture.html. 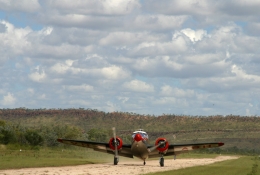 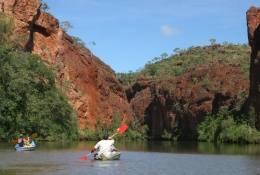 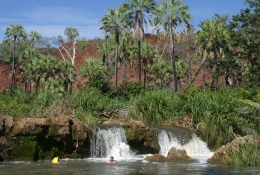 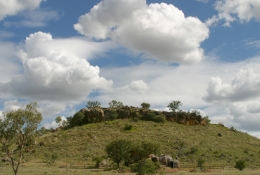 Cross section of a fossilised limb bone from a freshwater crocodile 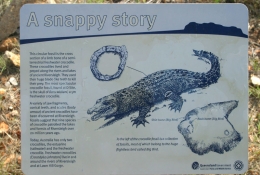 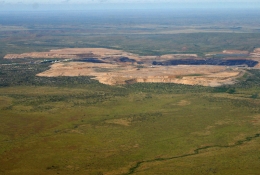