Rural service town with an impressive Steam and Traction Museum

Booleroo Centre is a rural service town for the surrounding wheat farmers. It is located in vast fields of wheat. The area is famed for its constant battles against drought. The ruins of the homes of farming optimists dot the paddocks around the town.

Booleroo Centre, which is 400 m above sea level in the southern Flinders Ranges, is located 274 km north of Adelaide.

Boolaroo is one of those Aboriginal words that no one seems to be sure of the meaning. It is a word used by local Aborigines and translated either as  'bulyeroo' or 'bulyaroo' which could mean either 'plenty' or 'soft mud'. The "Centre" was attached because, when the government surveyed a site for the town the locals rejected it and insisted that the town be at the centre of the Hundred of Booleroo. Thus "Booleroo Centre".

Booleroo Steam & Traction Preservation Society Museum
The town's major attraction is the collection of steam and traction engines on display at the Booleroo Steam & Traction Preservation Society Museum. As the website explains: "The aim of the Booleroo Steam and Traction Preservation Society is: “To foster the restoration and preservation of antique steam engines, vehicles, farm tractors and implements which show the technical developments and skills of an era now past”. The society was formed in 1968 and since then it has increased its collection so that now it can proudly boast that can offer a "working display of priceless machines ... The most unusual and unique display is dam sinking or scooping, using two 1880s, 26-ton Fowler steam ploughing engines, one at each end of ‘the dam’ site, with the scoop being hauled from one end to the other in turn by wire rope and winch." There are also "Stationary engines range in size from small two-and-a-quarter horse power units, ideal for farm work, a 125 hp Blackstone oil engine, up to the massive 375 hp Mirlees ‘gen set’ which was originally used for power generation in the Snowy Mountains Scheme in the 1950s. Of special interest is a Benz 125 hp model, believed to be out of a WWI (1914-1918) German U-boat, or submarine. Other displays include bottles, vehicle number plates, sack trucks, bag loaders, buggy steps, plough and cultivator shares, and ships tanks lids. There is an assortment of larger agricultural equipment – harvesters and winnowers, ploughs and windmills and a comprehensive booklet listing the exhibits and the rally program is available. The highlight is the Grand Parade, just as at any other agricultural function, only here the oval is full of machines, not livestock. The rally and/or static display is ideal for school groups to learn more of the heritage and history of mechanisation, especially on the farm and in the paddock." The annual rally, which is the centre of the society's year is held at the end of March. The Museum is open Tuesday 10.30 am - 11.30 am and it can be opened by appointment tel: (08) 8667 2185. They have a very good website. Check out http://www.booleroosteamandtraction.org.au/ for details of opening times and special days. If you are looking for something specific the society has a very detailed catalogue which can be downloaded at http://www.booleroosteamandtraction.org.au/wp-content/uploads/Booleroo_Steam_and_Traction_Catalogue.pdf. It is remarkably comprehensive and there are more than 150 engines on display.

* Prior to the arrival of Europeans the area around Booleroo Centre was occupied by Ngadjuri Aborigines.

* By 1853 William Spence Peter and George Elder had established a sheep run which they called Booleroo.

* Booleroo property was sold to Philip Levi in 1861.

* In the 1870s the government resumed the pastoral lease and subdivided the land.

* In 1875 the Hundred of Booleroo was surveyed.

* In 1878 a town site was surveyed but the locals rejected it preferring a more central location hence "Booleroo Centre".

* The Booleroo Centre Hotel was opened in 1883.

* In 1910 the railway line from Laura reached Booleroo Centre.

* In 1915 the railway was extended to Wilmington.

* The Boolaroo Steam & Traction Society was formed in 1968.

* In 1969 the railway stopped its passenger services.

There is no official visitor information but the local post office will help with any enquiries and there is an information stand at the corner of Stephens and Arthur Streets.

There is a useful local area website. Check out http://www.southernflindersranges.com.au/places-2/booleroo-centre. 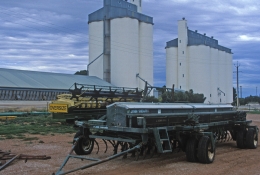 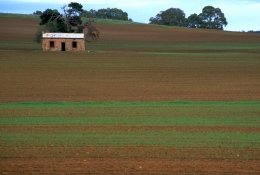 A reminder of the harshness of this marginal country - a ruin in a wheat field.