Boorowa is possibly the most overtly Catholic town in Australia. Not only was its handsome St Patrick's the first Roman Catholic Church built west of the Great Dividing Range but the church boasts a particularly beautiful stained glass window, added in 1881, which includes an image of Daniel O'Connel, Liberator of Ireland, below an image of St Patrick. Today, with tree-lined streets and much recent and impressive beautification, it is a model of a small and charming country town.

Boorowa is located south-west of Sydney and can be reached either via Goulburn and Yass (a distance of 329 km via the Hume Highway) or via Bathurst and Cowra (a distance of 381 km). It is south of Cowra and north of Yass.

In the 1860s the town's name was Burrowa. No one is sure what this meant although some believe it to be a Wiradjuri word meaning 'turkey'. Over time the spelling changed to Boorowa.

The Town History
The best starting point is the brochure - "Follow the Shamrock Trails around Historic Boorowa" - which is available at the Visitor Information Centre. It lists a staggering 42 places of interest on three trails around the town. Not only is each building described but they also have informative brass plaques.

Court House
The local Court House, now the Visitor Information Centre, is located on the corner of Marsden and Queen Streets. It was designed by the Colonial Architect and completed in 1884. The first case was heard by Judge Forbes in 1886 and it continued to operate as a Court House until 1988. Visitors should note the distinctive double-height court room and gracious Roman arches. It is Boorowa's most impressive building.

St Patricks Catholic Church
This is a remarkable rural church. It was the first Roman Catholic Church west of the Great Dividing Range, was completed in 1875 and officially opened in 1877. The church features outstanding stained glass windows depicting Saints Patrick, Brigid and Columba which were imported from Ireland and installed in 1881. The church also has a high altar made from imported Italian marble.

Young
Visitors eager to explore the gold prospecting and mining history of the region should visit Young, known at the time as Lambing Flats, which was one of the most important gold mining towns in the 1860s.

* Prior to European settlement the district was inhabited by First Nation tribal groups - the  Wallaballoa and Burrooa.

* as early as 1827 the area was settled by squatters. Most notable among the early Europeans were cousins Roger Corcoran and Ned Ryan from Clonoulty in Tipperary. They had been sentenced to transportation after burning down a hospital housing a garrison of British troops. The cousins arrived in the Boorowa area as 'ticket of leave' men and played an important part in encouraging friends and relatives to move to the area. Ned Ryan was partly responsible for the building of St Patrick's. Today Clonoulty and Boorowa are twinned towns.

* The municipality formally came into existence in 1850.

* A famous local story, highlighting the town's deep Irish connections, comes from the late 19th century when a Catholic nun was asked if she had ever been to Ireland and she replied "No. But I've been to Boorowa."

* In the 1860s when gold was found in the area Boorowa became infamous as part of the area where the bushrangers - Frank Christie known as 'Darkie' Gardiner, Ben Hall, Johnny Gilbert, John Dunn and John O'Malley - used the local roads and rampaged across an area from Young (Lambing Flats) to Jugiong, Collector, Marulan and Gundagai. There is a story of how Ben Hall's gang held up Webb & Crego's Store in Boorowa and stole some clothes so they could update their outfits.

The Bakery, named "Superb Bakery" after the Superb Parrot which lives in the area, in the main street is popular with the local community for both breakfast and lunch.

The local council has a website - http://www.boorowa.nsw.gov.au - which does provide information about both the Shamrock Trails and other local attractions including the Irish Woolfest. An excellent additional source of information is https://www.visithilltopsregion.com.au which covers Young, Jugiong, Boorowa and Harden Murrumburrah. 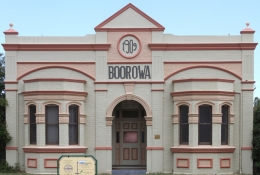 Boorowa Municipal Chambers (1909) - a prize of £5 was awarded to the designer. 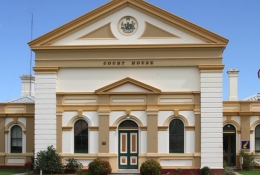 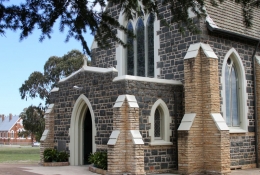 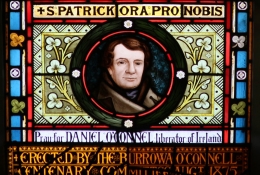 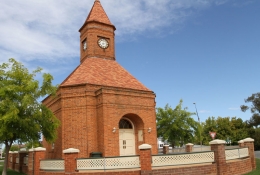