Border town between South Australia and Western Australia on the Nullarbor Plain.

Border Village, sometimes known as BP Border Village, is a combination of a Western Australian agricultural checking point (fruit, vegetables, plants, seeds, soil, honey, birds and animals must be declared) and a very comprehensive service centre offering petrol and diesel (BP, of course) as well as Motel, Cabin (dormitory) and Caravan Accommodation, a restaurant, a takeaway service, full garage service and a desalination plant which provides fresh water. It is open 7 days a week, 24 hours a day. The most valuable information for any visitors to the area is that the famed cliffs of the Great Australian Bight - the true highlight of the area - lie to the east of Border Village.

There appears to be no reason, apart from the 'bleeding obvious', why this town on the border of South Australia and Western Australia was named Border Village.

The Big Roo
The story of the Big Roo, or 'Rooey II', a giant kangaroo which is a perfect companion to all the other 'Big' pieces of Australiana - is the story of trying to devise something to cause visitors to stop, fill up (with both food and gasolene) and generally spend money. When Australia won the America's Cup in 1983 there was much national celebration. It was then followed, in 1987, by the defence of the cup which was held in the waters off Fremantle. At the time it was believed that the defence of the cup would attract such interest that the journey across the Nullarbor from the eastern states would see a dramatic increase in traffic. At the time two men, Allan Schwarz and Brian Rucioch, owned and managed the truck stop at Border Village. One day when they were driving to Ceduna to get supplies they came up with the idea of a Big Kangaroo to entice travellers to stop. In David Clark's excellent book Big Things Brian takes up the story: "We tried to acquire Matilda, the giant kangaroo mascot of the 1982 Brisbane Commonwealth Games, but it was overseas. So we got local signwriter and artist Bill Metheral (known locally as 'Saltbrush Bill') to produce drawings of a new big kangaroo and a scale model in polystyrene. Allan and I built the main body in Ceduna, and Val Samsonenko, the art teacher at a local school, made the head out of papier-mache. The whole thing was then fibreglassed by local fisherman Horrie Jolly and 'Saltbrush Bill' completed the job with several coats of paint. In order to generate some publicity, we ran a 'Name the Kangaroo' competition in the local paper and entries were received from all over the Eyre Peninsula. Ruey was the winning entry, but because my nickname was Ruey, we ended up calling it Ruey II. However, Saltbrush Bill spelt it wrong, so he became Rooey II."

The Cliffs of the Great Australian Bight
1. Understanding the Nullarbor
There is an extended quotation from Harold Normandale's book To And About Eyre Peninsula which explains the size and geology of the area. "In 1867, surveyor, E.A. Delisser, journeyed out into the treeless plain which he gave the name NULLARBOR from the Latin "NULLUS" and "ARBOR" meaning "no trees". The Aboriginal name for the Nullarbor Plain was "Oondiri" meaning "the waterless", for the average rainfall of the area is about 8 inches (203 mm) per annum. The Nullarbor Plain extends approximately 450 miles (724 km) from east to west and from the coast it extends 200 miles (322 km) to the Great Victoria Desert in the north - covering an area of 77,000 square miles (19,942,908 ha) - almost as large as the State of Victoria. The plain was created about 25 million years ago when it emerged from the sea; prior to that it had been the sea bed. The denizens of the deep had deposited their lime secreting skeletons and shells on the sea floor. These deposits with sediments of sand eventually created the limestone which covers the entire plain to the depth of 50 to 200 feet (15-60 metres), then covered by 2 to 3 feet (60-90 cm) of soil. The Nullarbor region is one of the largest arid or semi-arid KARST landforms in the world. KARST topography is the result of the solvent action of water on bedrock. This dissolving of rock forms many different KARST features - the Nullarbor caves being a good example."

2. What is the Nullarbor Plain
The term, Nullarbor Plain, has become seriously imprecise. It is commonly used to describe, with suitable vagueness, all the flatlands lying to the north of the Great Australian Bight. When it comes to the Indian Pacific railway crossing "the Nullarbor" it seems to cover just about the entire trip from Pimba in South Australia to Kalgoorlie in Western Australia. The Nullarbor actually defines a large area which is about 750 km from east to west and which runs between the Great Australian Bight and the edges of the Great Victoria Desert. It is not an accurate description - if Nullarbor means "no trees" that is simply not true. There are trees on the plain. Driving on the Eyre Highway there really is one area, between the Yalata and Nullarbor roadhouses in South Australia, which is truly treeless. There is nothing other than dry stunted grasses and low lying hardy desert bushes. The effect of this strange landscape is both monotonous and mesmerising. It is in the area around Nullarbor that the much-photographed "Beware of camels, wombats and kangaroos" signs begin to appear beside the road.

3. The Nullarbor Lookouts
At some of the lookouts the cliffs jut out so that there are truly magnificent views along the coast both to the east and the west. Typically the cliffs are 70-100 m above the Great Southern Ocean. The Great Australian Bight is recognised as the largest indentation in the Australian coastline and the cliffs are reputed to be the longest cliff face in the world. It is common to see seals on the rocks below and to hear their distinctive barking muffled by the faint sound of the waves breaking on the rocks. Equally it is common to see whales in season. There are flights over the cliffs from the Nullarbor Roadhouse. Beyond the sheer cliff face, the cliffs drop to a narrow coastal plain with sand dunes and scrub.
There are three main lookouts between Border Village and the  Nullarbor Roadhouse.
They are numbered, from the east, 1, 2 and 3 which means if you are travelling east you will visit No.3 first.
The third lookout is located 38 km from Border Village and offers a view of white sand dunes which descend through rough and rugged coastal lands to the beaches which lie beyond the Bunda Cliffs.
The second lookout is 96 km further east and has the best easterly view of the Bunda Cliffs. It is perched high above the cliffs and offers spectacular views of the Great Southern Ocean.
The first lookout (see the photo of the golfer driving a ball into the Great Southern Ocean) offers two excellent vantage points. It is located a short distance from the Eyre Highway 37 km further east of Lookout 2.
Each lookout has its own unique appeal. The first lookout is on the edge of the Bunda Cliffs and gazes south across the Great Southern Ocean. The second lookout has the best westerly view of the Bunda Cliffs and the third is located where the Bunda Cliffs drop into huge sand dunes.

The Longest Golf Course in the World
Nullarbor Links Golf Course
A very typical Aussie outback joke - the Nullarbor Links Golf Course is the world’s longest golf course with the first hole in Ceduna and the 18th hole 1,365 km away at Kalgoorlie in Western Australia. Check out the details at http://www.nullarborlinks.com. It is real and can be a lot of fun for committed golfers.
Hole 6: Border Kangaroo Par 3 and is 160 metres.
This is one of those classic Par 3 holes where, if you are straight and accurate, you will get par without any trouble. If you are not straight you will spend too much time in the bushes and end up with a score that you will not want to mention to your friends.

Robbie’s Guide to the Nullarbor Links
Border Village – Border Kangaroo
A narrow chute of scrub opening to a long green protected on all sides by thick scrub. Short and straight is the only way to play this hole.
The notes on the hole record: "Don Harrington headed up a syndicate that purchased W.A./S.A.Border Village in 1987. His involvement and commitment has seen many changes and improvement to facilities. After a disaster in 2000, when Border Village was burnt to the ground, Don's efforts and commitment were instrumental in the design, rebuild and rebirth of the Roadhouse. Don's contribution also extends to organising and running the annual Border Dash. The dash as he fondly calls it, is a fund raising event which raises money for local charities. Don's love affair with the dash began in 1987 and continues today. His commitment to the Eyre Highway is significant, and is the current Chairman of the Eyre Highway Operators Association. The Association that has developed and owns the Nullarbor Links. The world's longest golf course." The tee is named after Don Harrington.

* Prior to the arrival of Europeans the Nullarbor was home to the Mirning Aboriginal people who called it "Ooondiri" meaning "waterless". They did not occupy much of the land as it was both waterless and useless.

* In 1841 Edward John Eyre passed through the area on his ill-fated journey to King George's Sound in Western Australia. After spending five days without water traversing the Bunda Cliffs, the party found water at Eucla.

* In 1861 this section of land became part of South Australia. Prior to that it had been part of New South Wales.

* In 1867 the South Australian government surveyor E. A. Delisser while surveying the border between South Australia and Western Australia, gave the area the name Nullarbor from the Latin words 'nullus arbor' meaning 'no trees'.

* In 1896 Arthur Richardson became the first person to cycle across the Nullarbor.

* A railway line was built across the Nullarbor Plain in 1917.

* The area was used for British atomic and nuclear tests in the 1950s.

* By 1976 the road across the Nullarbor had been sealed.

* In 2000 the Border Village roadhouse was burnt to the ground.

* In 2011 the area around Border Village was given Wilderness Protection Status.

There is detailed, up to date, information at http://www.nullarbornet.com.au/towns/borderVillage.html - an outstanding and useful website. 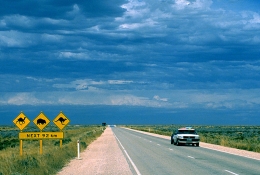 The long straight road on the Nullarbor with warnings about camels, wombats and kangaroos. 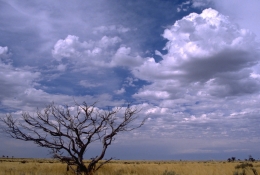 A solitary tree on the vast Nullarbor Plain. 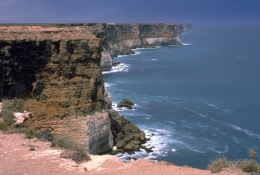 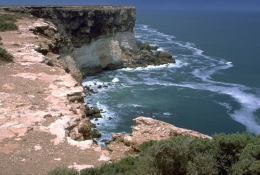 Sometimes seals can be seen on the rocks at the base of the cliffs. 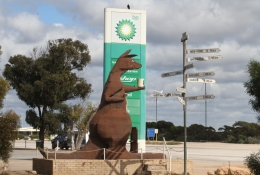 The Big Roo outside the roadhouse. 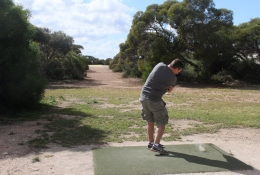 You can see the hole from the tee but the trees on either side give you little room for error. 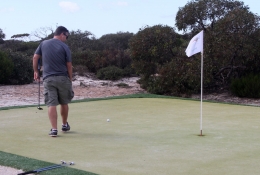 Considering the green and the putting possibilities. 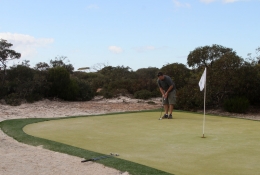