Bordertown, as its name suggests, is the symbolic "border town" between Victoria and South Australia. The fact that it is actually 20 km west of the border causing some typically Australian humour. There was a time, for example, when it became a talking point for Victorians when they would declare there was an imminent invasion from South Australia and the locals were massing at Bordertown. In reality it is a quiet town which was created during the goldrush era which is now both a service centre for the surrounding district and a place made famous by the fact that Bob Hawke, the country's longest serving Labor Prime Minister, was born in the town.

Bordertown is located on Dukes Highway 271 km south-east of Adelaide and 82 m above sea level.

The British have a joke about the obviousness of so many Australian place names. Bordertown would appear to be  a suitable example of the "bleeding obvious" but, ironically, it is actually 17 km west of the border. And to confuse matters the man who surveyed the route and reached the town thought it should be called Bordertown (because it wasn't on the border) and suggested Tolmer because his name was Captain Alexander Tolmer.

Bob Hawke's Family Home
This modest, but elegant, sandstone house, located at 63 Farquhar Street, was once the home of Australia's longest serving Labor Prime Minister. RJL (Bob) Hawke was born here on 9 December, 1929. It has been renovated and is used by community organisations. The house was built by the National Bank in 1885. By 1897 it had been purchased by the Congregational Church. Hawke's father, Clement Hawke, was the Congregational Minister in Bordertown from 1928-1935.

Bob Hawke Bronze Bust
There is a bronze bust of R.J.L. Hawke outside the Council Chambers at 58 Woolshed Street. The sculpture was unveiled by Hawke's father, the Reverend A.C. Hawke in 1987 and it was a gift to the citizens of Tatiara from the Giannarelli Family. Monuments Australia (see http://monumentaustralia.org.au/themes/people/government---federal/display/50491-bob-hawke) has an excellent and succinct overview of Hawke's career when it writes: "Born in Bordertown, South Australia, Hawke graduated in law and economics from the University of Western Australia and was that state’s Rhodes scholar in 1952. In 1955 he graduated Bachelor of Letters from Oxford. He joined the Australian Council of Trade Unions (ACTU) in 1958, working first as a researcher, then as a union advocate before the Arbitration Commission. In 1970 he became president of the ACTU and for the next ten years was the most prominent figure in the trade union movement, with a reputation as a hard negotiator and an effective settler of disputes. He was also president of the Australian Labor Party from 1973 to 1978. Hawke entered federal parliament in 1980 as the Labor member for Wills in Victoria, having resigned form the ACTU. He made a successful bid for the Labor leadership in February 1983 on the same day Prime Minister Malcolm Fraser called an early election. The electors voted Labor in and Hawke became prime minister. His government was returned at elections in 1984, 1987, 1990. He thus became the first Australian Labor prime minister to be elected for a third (and a fourth) term and the longest-serving Labor prime minister."

Bob Hawke Gallery
Located at 43 Woolshed Street, the Bob Hawke Gallery is open 9.00 am - 5.00 pm Monday to Friday and 9.30 am - 11.30 am on Saturdays. The gallery contains a number of pieces of Hawke memorabilia including, most famously, the "Australia" jacket he wore when Australia won the America's Cup. The collection also includes "photographs, newspaper clippings, cartoons, paintings and memorabilia acknowledging and celebrating Bordertown as the birth place of our former Prime Minister. The collection also includes a portrait of Bob Hawke by artist Michael Henwood." Check out https://www.tatiara.sa.gov.au/page.aspx?u=583&t=uList&ulistId=0&c=5673.

Bordertown Recreation Lake
Located off Winter Road to the north of the town the Recreation Lake is an ideal place for a picnic, for a brisk walk (there are walking trails around the lake), to fish for redfin and perch and to go canoeing. Swimming is not allowed. There are three unusual works of public art - the Horse Fence, Crooked Tank and the Sluice Gates - around the edge of the lake.

Bordertown Wildlife Park
Located on Brown Terrace to the east of the town centre,  this unusual 4.5 ha wildlife park, which has been operating since 1968, allows people to view the animals from outside the fences. There is no entrance to the park. The park has mobs of kangaroos and wallabies as well as many different bird species. An unusual attraction are the white kangaroos - they are not albinos but rather a strain of Western Grey Kangaroos. For details check out https://www.tatiara.sa.gov.au/page.aspx?u=583&t=uList&ulistId=0&c=5675.

Clayton Farm Heritage Museum
Located 3 km south of Bordertown on the Naracoorte Road, the Clayton Farm Heritage Museum is a genuine rarity: an attempt to recreate what a farm was like more than a century ago. The farm was owned and operated by the family of August Gottfried Wiese (who took up the land in 1872) from 1872-1985. Today it has a remarkable collection of historic farm buildings (all built either by the owners or by local tradesmen) made from traditional materials - limestone, grasses and a variety of gums - and some outstanding and very significant historic farm machinery. The buildings include a homestead dating from 1885, a silage and pigsty and a huge, thatched roof woolshed. The local website (https://www.tatiara.sa.gov.au/page.aspx?u=583&t=uList&ulistId=0&c=5672) explains the genesis of the farm: "The Wiese family engaged in mixed farming, growing wheat and oats, selling chaff, grazing sheep and cattle, raising pigs and keeping bees. The farm buildings were constructed in a variety of materials, some of stone, some clad with split slabs or corrugated iron, several with massive forked round posts supporting straw roofs. These roofs are often called thatch, but true thatch is steeply pitched so water runs off before it can trickle through; these roofs simply soak up the light rain. It had been common since the 1830s for German farmers to build similar structures from heavy Australian bush timbers, but the Wieses’ persisted with these practices longer than most, and also seem to have taken particular pride in the strength and durability of their buildings. The result is a complex of about twelve farm buildings ranging in date of construction from the 1870s to the early twentieth century, which form a remarkable record of past farming practices and construction techniques. Perhaps the most notable building is the woolshed, about 30m x 10m in plan, built as a chaff shed about 1903 with massive posts, slab walls and a straw roof. It was converted to a shearing shed in 1920, and remained in use until 1961." It is open from 11.00 am - 4.00 pm Monday, Wednesday and Friday and from 1.00 pm - 5.00  on Sundays. For more information tel: (08) 8752 2548.

* Prior to the arrival of Europeans the area was home to the Potaruwutj Aboriginal people.

* The area was first settled in the 1840s when grazing leases were taken out by Loudon McLeod (Nalang Station), John and Charles Scott (Cannawigara Station) and John Binnie (Wirrega Station).

* In July, 1852 120 allotments were sold (the cost was 50 shillings for a quarter acre block) 'near Scott's wool shed and on the overland route from Adelaide to Mount Alexander' as part of a plan to establish a town/depot where the gold escorts could rest on their journey from the west Victorian goldfields to the port of Adelaide. The problem was that the only route at the time from Adelaide to Victoria was around the coast. Captain Alexander Tolmer surveyed a route through the 90 Mile Desert and it was on the basis of this survey that he suggested that a depot be established on the border. He was apparently very upset when, even though the town was not on the border, the authorities still decided to call it Bordertown. He thought it should be called Tolmer.

* After the goldrushes the town continued to prosper as a major service centre.

* By the 1870s wheat farmers were settling the area.

* In 1880 the town's first newspaper, the Tatiana Mail, was published.

* The town's future as a transport centre was assured when the railway arrived in 1886.

* In 1908 the first edition of the Border Chronicle was published.

The local shire has a useful website. Check out https://www.tatiara.sa.gov.au. 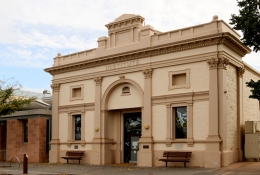 The Bordertown Institute in the main street 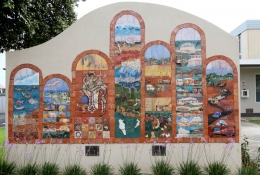 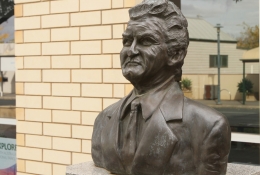 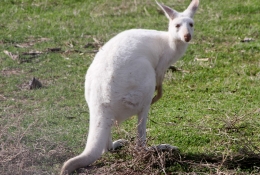 A rare white kangaroo at the Wildlife Park 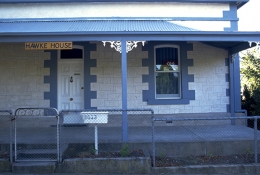 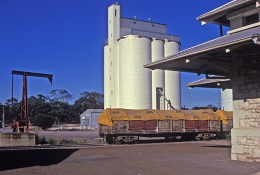 The wheat silos at Bordertown 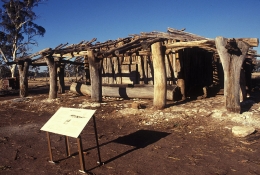