Historic town on the Clyde River.

Although less well known than Richmond or Campbell Town, Bothwell Historic Town, with 60 buildings and locations of historic significance, is one of the most important Georgian towns in Tasmania. Beyond its historic significance it is a quiet, pretty agricultural town on the Clyde River.

Bothwell is located 76 km north of Hobart and 350 m above sea level.

Governor George Arthur named Bothwell after a town in South Lanarkshire, Scotland which lies to the east of Glasgow.

Bothwell Historic Town
Bothwell Historic Town is one of the most historically significant towns in Tasmania with a total of 60 buildings and locations of significant historic interest. The Visitor Information Centre has a small brochure titled Let's Browse in Bothwell which provides a useful map to the town as well as short descriptions of the places of interest around the town. Some notable buildings - well worth inspecting - include:

(1) Australasian Golf Museum
Located in Market Place in the Old School House (1887), the Australasian Golf Museum houses a comprehensive collection of golfing memorabilia, an amazing collection of golf clubs and explains "The evolution of the game through the different eras, as defined by the changing golf ball; from Feathery (1400s to mid 1800s) to Gutta-percha (1850s to 1900) to Haskell (turn of the century to World War II) and the modern balls." It is open from 10.00 am - 4.00 pm daily. Check out http://www.ausgolfmuseum.com for more details.

(4) St Michael and All Angels Church
Located at the corner of Patrick Street and Market Place is the town's Anglican Church - St Michael and All Angels - which was built in 1891 by the stonemason Thomas Lewis using local stone. Enter the church and admire Lewis's particularly beautiful stone staircase and the simple, elegant stone seats in the porch. It is a comment on Tasmania's weather that one of the most appealing aspects of the church is the fire place on the western wall which is used to heat the church on winter nights.

(26) Queens Park and Memorial Sundial
Erected in 1915 at the western end of Queens Park is the Bothwell Memorial Sundial. The sundial has been described as "the most interesting sundial in Australia" and perhaps the oldest free standing vertical sundial in the country. There is a brochure available at the Visitor Centre which explains how to read the time from the dial.

(47) St Luke's Presbyterian Church
St Luke's Presbyterian Church, now St Luke's Uniting Church, is also located in Market Place. It was designed in 1828 and completed in 1831. Of particular interest are the carvings above the main doorway. Daniel Herbert, the genius convict stonemason-sculptor who carved the images on the sides of the bridge at Ross, is credited with creating these strange images which may depict a Celtic pagan god and goddess. Herbert was known for his droll sense of humour. If they are pagan it is amusing to note that Governor Arthur upon inspecting the church ordered the architect, John Lee Archer, to change the rounded windows because they were 'unchristian'. The church was shared by Presbyterians and Anglicans until around 1880 when the Anglicans built their own church.

(55) Ratho and Wentworth
There are two 19th century 'gentlemen's residences' near Bothwell. 'Ratho', which lies to the west of the town on Highland Lakes Road, is a single storey stone house with wooden Ionic columns at the front. Built in the 1830s to a design by architect Andrew Bell it was the home of Alexander Reid. Ratho's great claim to fame is that the Ratho Golf Course is the oldest course in Australia and the oldest known course outside Scotland. Ratho is still a working farm with "grazing sheep maintaining the fairways and fences to keep them from the square greens, the course is a time capsule of how the game began and the way it was played during its first 500 years." It is now over 170 years old. Check out http://www.rathofarm.com for more details.
'Wentworth', on Wentworth Street was built for one of the town's early Police Magistrates, Major D'Arcy Wentworth. It is a gracious two storey home built in 1833 and originally known as Inverhall. D'Arcy Wentworth was the brother of William Charles Wentworth (who achieved fame when he was one of the first Europeans to cross the Blue Mountains) and son of D'Arcy Wentworth of Sydney. Although the home is now called Wentworth, D'Arcy only lived in it for a short time before he was replaced as the local police magistrate.

(61) Nant Estate
Located at 254 Nant Lane, Bothwell and listed on the National Estate, the Nant Estate dates back to 1821. Today, after meticulous restoration, this idyllic and historic building is home to a whisky distillery located in Australia's oldest working flour mill. It produces Nant Single Malt Tasmanian Whisky which was rated amongst the top fifty whiskies in the world in 2012. It scored 95.5 out of 100. There are daily tours of the distillery at 10.00 am and 4.00 pm. As well the Estate offers Whisky Packages including a Highland Shoot Package (with clay target shooting); a Nant Whisky Lovers Package and a Nant Whisky Connoisseurs Country Estate Package. Check out opening times and information at http://nant.com.au/ or tel: (03) 6259 5790

Other Significant Historic Buildings
* In Market Place - Over the road from St Luke's church is Rock Cottage which was built in 1864 by Thomas Lewis.

* In Patrick Street - The Castle Inn dates from 1829 and is recognised as the second oldest continuously licensed hotel in Tasmania. So old is the hotel that there is evidence that local Aborigines performed a corroboree in front of the hotel in 1832.

* About midway between Alexander and Patrick Streets is the Falls of Clyde also known as the 'Coffee Palace'. This two storey brick and stucco building was constructed around 1831. This attractive Georgian building operated as The Young Queen Hotel from 1851-77. It has nine bedrooms.

* In High Street - Slate Cottage, named  because of its slate roof, at 4 High Street (1835) was built by Edward Boden Snr. one of the town's early settlers. The cottages at 6 and 8 High Street have also been listed.

For a comprehensive list of the heritage buildings in the town check out http://tasnationaltrust.blogspot.com/2016/10/national-trust-tasmanian-heritage_45.html.

Thorpe Watermill
Thorpe Watermill should probably be called Axford's Watermill as it was Thomas Axford who built the corn mill which was fully operational by 1825. Axford ran the mill until 1865 when he was killed by the bushranger, Rocky Whelan. In 1899 the 800 acre property known as Thorpe (the name came from Thorpe Farm in Berkshire) was purchased by Frederick McDowall who continued to operate it until 1916. It ground wheat until 1907 and then cut chaff until 1916. It was restored in the mid 1970s by the Bignell family. Today John Bignell runs Thorpe Farm Cheese at 189 Dennistoun Road, Bothwell and uses the mill to grind grain for specialist bakers. There is an interesting account of the restoration of the mill in the Australian Journal of Historical Archaeology which can be read at http://www.jstor.org/discover/10.2307/29543212?uid=3737536&uid=2&uid=4&sid=21104143253417. It notes that "Thorpe Watermill is the only known Australian example of a traditional water-driven flour mill, that can be operated in the original manner. This uniqueness results from restoration work that was undertaken during the 1970s by the Bignell family, who own the mill. The work was carried out particularly by John and Peter Bignell, with very few resources."
Inspections of this historic mill can be arranged by contacting (03) 6259 5678.

Fishing
The area has a reputation amongst trout fishermen with local lakes being well stocked with wild brown and rainbow trout. Anglers are drawn to the area by the challenges that await them in Arthurs Lake, the Great Lake and in Bronte, Little Pine, Penstock and Dee Lagoons.

* Prior to European settlement the area around Bothwell was occupied by the Lairmairrener First Nation people.

* The first European in the district was Lieutenant Thomas Laycock who crossed Van Diemen's Land from Port Dalrymple (Launceston) to Hobart in 1806 and camped beside the Fat Doe River (now the Clyde River) near the present site of Bothwell.

* Explorers, led by Surveyor J Beaumont, moved through the area in 1817 and by 1821 settlers, mostly Scots, had taken up land along the banks of the Clyde River.

* Bothwell's first European settler was Edward Nicholas who arrived in 1821 and built Nant's Cottage, a simple Georgian dwelling with an iron-hipped roof and 12 pane windows.

* When the town was laid out in 1824 the main streets were named Alexander (after Alexander Reid of 'Ratho') and Patrick (after Patrick Wood of Dennistoun) after the town's two most prominent citizens.

* St Luke's Presbyterian (now Uniting) Church was built between 1828-31 and, after the church at Ebenezer on the Hawkesbury River, is the second-oldest Presbyterian church in Australia.

* In the 1820s Alexander Reid built a golf course on his property 'Ratho' and it was here that the earliest game of golf was played in Australia.

* Nants Cottage, now Nants Estate, was home to the Irish political exiles, John Mitchell and John Martin in the 1850s. Both rebels had been arrested for treasonable writings with Mitchell writing in The United Irishman and Martin in The Irish Felon.

* Today Bothwell is a small and charming historic town which is a magnet to those who want to explore the Georgian architecture of early Tasmania.

There is a local website which has interesting historic pictures and details about accommodation and eating in the town. Check out http://www.bothwell.com.au. 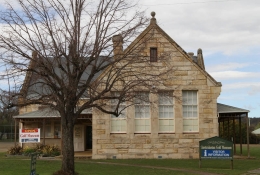 The Australasian Golf Museum and Visitor Centre in Bothwell. 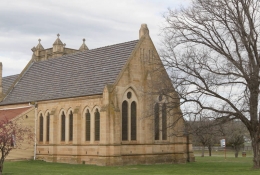 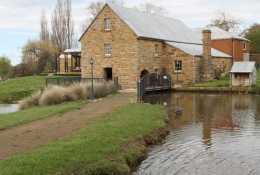 Nant Estate (circa 1821) famous for its Tasmanian Whisky. 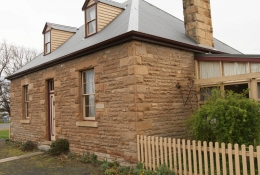 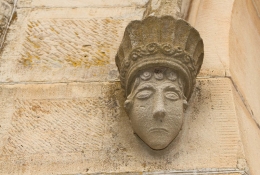 St Luke's Presbyterian Church (1831) - the gargoyle of a Celtic pagan goddess carved by Daniel Herbert who did the sculptures on the bridge at Ross. 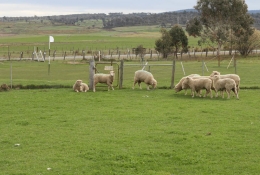 Sheep grazing near a square green at Ratho Golf Course. 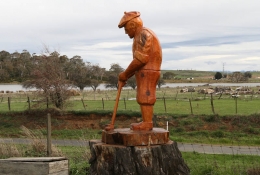 Wood carving of a golfer at the entrance to the famous Ratho Golf Course.