Bowraville, located in the heart of the Nambucca Valley, is a low key alternative and Seachange lifestyle destination where people seeking tranquility and like-minded people buy relatively cheap accommodation in the hinterland or the small town. It is approximately half way between Sydney and Brisbane. The town promotes itself as 'the verandah post heritage town' because most of the older buildings in town are characterised by old-style verandas which stretch out into the street and provide shade in the summer months. Today the town's alternative lifestyle is apparent in the alternative movie house in the main street and the masseurs and alternative activities advertised in shop windows. The district, which before the 1960s was dominated by timber and dairying, has seen the development of macadamia farms, avocado growing and even deer and ostrich farming. The towns main street has been carefully recreated (much of it had been destroyed by a series of bush fires) so that it maintains a modest old world charm.

Bowraville is located 486 km north of Sydney via Pacific Highway and 13 km west of Macksville.

In the 1850s the town now known as Bowraville was known simply as Bowra. This was changed in the 1870s because of confusion with Bowral in the NSW Southern Highlands. It is unlikely that the origin of the two words was a single Aboriginal word and consequently where Bowral is thought to mean 'high', Bowra has been variously translated as  'cabbage palm', 'bullrout fish', 'scrub turkey' or 'bald head'. In other words: no one knows. There is even an argument that the town's name comes from a Captain Bowra who sailed up the Nambucca River looking  for cedar.

St James Anglican Church
Located at the northern end of the main street this striking wooden building was completed in 1899. It is a symbol of the town's use of timber. It was logical. The town's early history is driven by the local timber industry. The land for the church was purchased at a Crown Land auction in Bellingen in 1896 and the foundation stone was laid in 1897. Bishop Green dedicated the church on 10 January, 1899. Extensions to the church were completed in 1932 and the rectory was completed in 1936.

Walking Around Town
Bowraville is a town to be savoured. It is a timber town with lots of veranda and a sense of time standing still. There is better way to experience it than walking up and down the main street and admiring the attractive historic buildings including the Bowra Hotel with its wide veranda, the old State Bank, the Phoenix Bank, the Post Office, the Bowraville Folk Museum and particularly the attractive wooden churches at the northern end of town. The Old Bank Gallery and Tea Rooms in the main street is also worth visiting as it has fine displays of paintings and craft made by artists living in the local area.

Frank Partridge VC Military Museum
Located at 29 High Street and open Monday to Friday 10.00 am - 3.00 pm, Saturday 10.00 - noon, Sunday 10.00 am - 2.00 pm, this museum is named after Frank Partridge who won a VC during World War II and who became a "celebrity" when he kept winning Pick-A-Box an early television quiz show. He was a quiet, dour man with a photographic memory. The museum has numerous galleries and displays including a Bofors gun, a 25lb Field Gun and a Mark 8 torpedo. There is a Veteran's Lounge where patrons and veterans can watch a range of DVDs. Contact tel: (02) 6564 7056 or check out http://www.militarymuseum.org.au/galleries.html.

Bowraville Folk Museum
Located at 86 High Street, the Bowraville Folk Museum has a collection of historic items which offer insights into the history of the local district including a German mine washed up on Middle Head beach in 1942, lots of exhibits of the smithy's art and a 120 year old grand piano. The buildings include a boarding house, Ryan's cottage, a unique collection of naval tallies and some farm machinery. In the area of the Folk Museum is the local Presbyterian Church which dates from 1885. It is open from Monday to Friday 10.00 am - 3.00 pm and Saturday and Sunday 10.00 am - 1.00 pm. Contact tel: (02) 6564 8200.

Drives in the Local Area
Bowraville is located in some of the most beautiful countryside in New South Wales. Thus the visitor can drive in any direction from the town and find they are in spectacular forest countryside where giant tree ferns, cedar trees, fig trees, stag horns, kangaroo ferns, and eucalypts abound. Particularly attractive are the roads from Bowraville to Bellingen and from Bowraville to Taylors Arm, the home of the famous 'Pub With No Beer'. See the entry on Taylors Arm.

The Bowraville Murders
For the past 26 years there has been ongoing interest in the unsolved murders of three Aboriginal children in the Bowraville area. The first was Colleen Walker who disappeared from the local Aboriginal community on 13 September, 1990. Her body has never been found but her clothes were found, weighed down, in the Nambucca River. The second was Evelyn Greenup who disappeared on 4 October, 1990 and the third was Clinton Speedy-Duroux who disappeared in January, 1991. There is a detailed account of the deaths and the subsequent investigation and prosecution at https://en.wikipedia.org/wiki/Bowraville_murders. Also worth reading is http://www.abc.net.au/news/2016-05-13/bowraville-murders-police-say-they-have-new-evidence/7411122 which records an attempt to reopen the murder trials.

* Before the arrival of Europeans the Bowraville district was inhabited by the Ngaku and the Gumbayngirr Aborigines.

* The first Europeans to arrive in the area came in the 1840s. Like most of the coastal areas of New South Wales the first settlers were cedar cutters.

* In March 1841 Clement Hodgkinson explored the upper reaches of the Nambucca and Bellinger Rivers. He was the first European to make contact with the local Aboriginal community.

* Bowra was renamed Bowraville in the 1870s because confusion was occurring with the Southern Highlands township of Bowral.

* Throughout the nineteenth century Bowraville was primarily a timber town. It grew to meet the needs of the local timber cutters.

* By the 1870s the town had two hotels, a number of general stores, a blacksmiths shop, a tailor, local post office, a school and a number of churches.

* By the 1880s, while timber was still dominant, the district was also an important dairy and pig raising area.

* The town was seriously damaged by fire in 1916

* The Bowraville Folk Museum was opened in 1970.

* The town has remained relatively static throughout the 20th century but by the 21st century it had chic cafes and gift shops and the impressive Bowraville Theatre.

There is a useful local website. Check out http://bowraville.nsw.au. 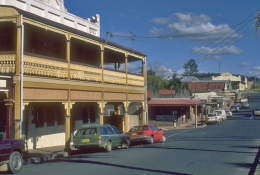 The main street of Bowraville with the Bowra Hotel in the foreground. 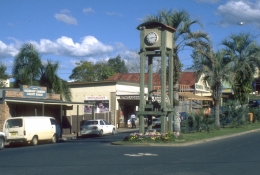 The Town Clock in the main street of Bowraville. 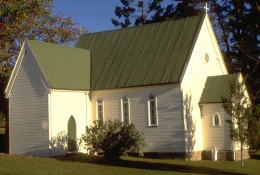 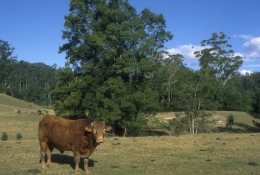 The verdant countryside between Bowraville and Bellingen.