Quiet timber town famous for "The Showdown on Branxholm Bridge"

Branxholm is a timber town. As you drive in you will notice the timber mills, the mountains of sawdust, the rise of smoke from the burning off of sawdust and the hop fields which spread across the valley floor. This is a working town which sprawls along the valley. In recent times it has become an important part of the "Trail of the Tin Dragon" - a trail recalling the involvement of Chinese miners in the development of the area - because of the infamous "Showdown on the Bridge" and the interesting Henry Ah Ping Heritage Walk.

Branxholm is located 281 km north of Hobart and  88 km north-east of Launceston on the Tasman Highway.

The district's first European settler, James Reid Scott, named the town after the small village of Branxholm which lies south of Edinburgh in Scotland.

Red Bridge Chinese Mining Historic site
The Trail of the Tin Dragon, which follows the Chinese tin miners from Launceston to St Helens via Branxholm (see http://www.trailofthetindragon.com.au), suggests that people interested in the mining of the local area pause and remember "the showdown on the bridge".

The Showdown on Branxholm Bridge
"The showdown on the bridge" occurred when, during the spring of 1877, a group of Chinese miners, on their way to the Ruby Flats mines, were stopped and attacked by European miners. It was an interesting display of animosity because the Chinese miners were industrious and tended to work the small scale, poorer, more isolated mine sites. They displayed considerable ingenuity in getting water to their alluvial mines.

Today the modern bridge is painted red and has a number of Asian and Chinese signs on the sides. This is not the bridge that was the scene of the 1877 attack but it does allow the visitor to imagine what must have taken place.

The Interpretation Marker
A detailed description of Branxholm's role in the history of the Chinese tin miners can be had at the excellent Interpretation Marker which stands on the hill on the eastern side of town. It is one of several distinctive Trail of the Red Dragon markers which allow visitors to understand the role of the Chinese in tin mining in the area. It has a section on the Showdown on the Bridge.

Heritage Cemetery
Located on Mount Paris Dam Road, the Branxholm Cemetery is worth visiting because of the gravestones of early tin miners and particularly those of some Chinese miners who are buried in the cemetery.

Imperial Hotel
A fine example of the use of timber in the area is the Imperial Hotel. Built in 1907 it has a particularly elegant upper veranda and an attractive timber facade. It offers meals and accommodation, tel: (03) 6354 6121.

* Prior to European settlement the area around Branxholm was inhabited by the local Pyemmairrener Aboriginal people who had lived in the area for thousands of years.

* The first European settler in the district was James Reid Scott who arrived in the 1860s and named the tiny settlement after a small village in Scotland.

* By 1870 there were only three buildings in the valley. It could hardly be called a settlement.

* By 1873 tin had been discovered and a miner's shanty town had grown up.

* By 1877 the population in the valley had risen to about 300. That year saw the first act of racial hatred and violence in the mining communities when, during the spring, a group of Chinese miners, on their way to the Ruby Flats mines, were stopped and attacked by European miners.

* By 1883 the town of Branxholm had been officially proclaimed.

* In 1887 the Tasmanian Government brought in immigration restrictions which resulted in many Chinese miners returning to their families in Guangdong.

* In 1911 the state rail connected Branxholm to Launceston via a branch line. This line was closed down in 1992.

* In 1970 the first hop fields were planted in the district.

There is no visitor information in Branxholm. The closest is at Scottsdale Visitor Information Centre, 4 Alfred Street, Scottsdale, tel: (03) 6352 6520

There is no specific website dealing with the town and its attractions. The Trail of the Tin Dragon website - http://www.trailofthetindragon.com.au/branxholm - is useful. 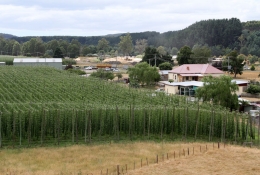 The hopfields and sawmill which help drive the economy of Branxholm. 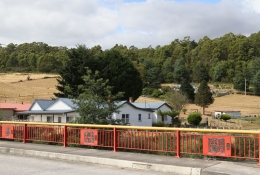 The modern version of the Red Bridge, part of the Trail of the Tin Dragon. 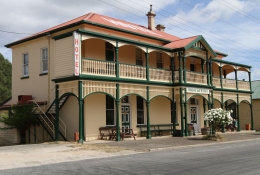 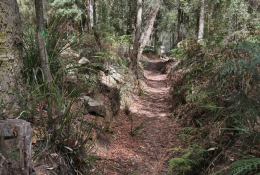 The old water race at the beginning of Henry Ah Ping's Heritage walk. 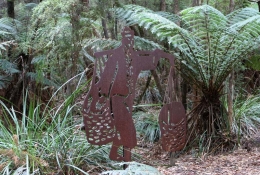 A steel silhouette of a Chinese Trader at Henry Ah Ping's Heritage walk outside Branxholm. 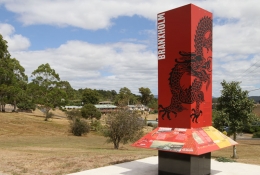 One of the major signs on the Tin Dragon Trail Heritage Trail.