Branxton is a small township in the Cessnock shire situated on the New England Highway between Maitland and Singleton. It has several older buildings which reflect the fact that it emerged in the early to mid-19th century as the Hunter Valley was opened up beyond Maitland.
It used to suffer from endless trucks roaring through from Sydney to Brisbane but now, having been bypassed, there is time to admire the historic buildings and wander around the town before heading south to the Hunter Valley vineyards.

Branxton is located 57 km north-west of Newcastle, 175 km north of Sydney via Cessnock and 43 m above sea-level.

In 1848 the small village called Black Creek was subdivided and the land sold. Fearing that Black Creek would not attract potential buyers the name was changed to Branxton after a tiny village in Northumberland close to the English-Scottish border.

Branxton Heritage Walk
There is a downloadable Heritage Walk along Maitland Street (http://www.branxtongreta.com.au/wp-content/uploads/2017/07/Branxton-Heritage-Walk-.pdf) which lists a total of 16 places of historic interest around Branxton. These are the notable highlights (the numbers coincide with the brochure):

1. No. 31 Maitland Road
"William Shepherd Snr. built the single-storey lapped weatherboard cottage with the hipped-iron roof and Victorian sash windows around 1843, probably as a family home. It is the oldest remaining building in Branxton.
It became the “Travellers’ Arms Inn” in 1852 and when the two-storey addition was built in 1893 it became the Royal Federal Hotel. This section is a late Victorian asymmetrical timber house. It has a timber façade with lapped weatherboard sides and rear, hipped iron roof and brick chimney. The two-storey bull nose balcony with iron supports, valance and balustrade is supported with local iron posts stamped “Made in Morpeth”. The four paned sash window and French door to the balcony are typical of Victorian architecture."

2. No. 45 Maitland Road - The Commercial Hotel
Now closed, this was one of the town's four hotels. Originally a timber building, it was burnt down in 1929. The second Commercial Hotel, designed by W.H. Pender from Maitland, was built at a cost of £5000 by the brewers, Tooth & Co. It was leased until it was purchased in 1988.

6. The 1930s Horse Trough
The brochure tells a fascinating story about the origins of the horse trough: "George Bills was born in Brighton, England in 1859. He migrated in Australia in 1873. In 1882 he opened a bird dealers shop in Brisbane, where he met and married Annis Swann who had emigrated from Sheffield, England. George became a Life Governor of the RSPCA in 1924.
George and Annis had no children, and following the death of George in 1927; a trust fund was established for some ₤70-80,000. One of the purposes of the trust, as set out in George Bills' will, was to: "... construct and erect and pay for horse troughs wherever they may be of the opinion that such horse troughs are desirable for the relief of horses and other dumb animals either in Australasia, in the British Islands or in any other part of the world subject to the consent of the proper authorities being obtained." The majority of the troughs were installed in Victoria and New south Wales between 1930 and 1939." This is a fine, and well preserved, example of their work.

8. Bank of New South Wales and the Horse
On the corner of Clift Street and the highway is the old Bank of New South Wales (1939) (now a private residence). "This two-storey red brick building was erected with a steep tiled roof, dormer windows and boarded gables at the front and rear.
Architecturally described as Inter-war classical revival it features a Georgian revival facade using the American influenced columned portico. The bricks were purchased from Tamworth." There is an impressive and accurate bronze statue of a horse on the lawn beside the footpath.

9. Victoria House
On the corner of Clift Street and the New England Highway (at 72 Maitland Street) is the elegant two storey Victoria House. Built in 1892 it was originally a general store servicing the town and travellers through the town. "Designed by J. W. Scobie, it displays a high parapet with a central pediment decorated with brick and render. Cast iron posts support both upper and lower verandahs." It has had a variety of uses, and has seen a number of alterations, since it was built.

10. No.70 Maitland Road - The Bakery
This building has been a bakery since it was built by Joseph Bercini in 1892. Over the years it has achieved fame firstly for its Sylvester's dampers which were made by Paddy Sylvester who arrived in Branxton as an apprentice in the 1930s and secondly when, during the time when the Greta Army Camp was operating, it provided 3,000 loaves a day to the camp.

16. No.50 Maitland Road - the Royal Federal Hotel
This handsome hotel, now the only one operating in the town, was opened in 1927 and built in classic two-storey Federation style. The brochure describes the construction as "Both the wide upper verandah and footpath are supported with timber posts. The interior area facing the street includes a public bar on the eastern side and originally a Ladies Lounge, on the western side with a formal dining room. The formal entrance hallway between these two rooms ran the length of the building to an area originally known as the beer garden. W. H. Pender of Maitland designed the building."

Court House
Opposite the Anglican Church is the town's Court House which is characterised by brick with a gabled roof, front veranda and symmetrical ancillary offices, also with verandas. It forms a group with the Police Station and Residence.

Police Station
Next door to the Court House is the police station which was built in 1880 on a design by the notable colonial architect, James Barnet. It is a symmetrical, single-storey brick building with a front veranda topped by a stepped gabled roof and pediment over the doorway.

Branxton Uniting Church
On the corner of Drinan and Clift Streets is the old Branxton Methodist (now Uniting) Church which dates from 1865.

Rothbury Riot Memorial
Located on Branxton Road (the main road between Branxton and Cessnock) the Rothbury Riot Memorial recalls a little known moment in the history of coal mining in the Hunter Valley. The Rothbury coal mine was the site of a deeply confrontational lockout in 1929 when the mine owners decided to reduce miners’ wages. It was hardly surprising that the miners, through the Miners Federation fought the decision with strike action. The mine owners decided to close down the mines in the Hunter Valley. The lockout had gone on from eight months when the mine owners decided to reopen  the Rothbury mine using scab or non-union labour.  The mining union, strongly backed by the miners, decided to take their fight to the non-union labour. It was estimated that 10,000 miners and protesters gathered on 16 December, 1929 to confront the scab miners. Police were called in to quell the possible violence. In the violent standoff, one miner, Norman Brown, was killed by police gun fire. Many more protesters and miners were injured. The miners eventually accepted the pay cut and in May 1930 and they returned to work. The lock-out and confrontation became known as the Rothbury Riots or the Battle for Rothbury.
The monument's inscription is explicit in its condemnation of the mine owners.
"At This Site during The Northern Coal Lockout March 1st 1929 - June 3rd 1930, Miners And Police Clashed on Monday, December 16th 1929, Over The Use Of Non-Union (Scab) Labour at Rothbury Colliery. One Miner - Norman Brown - Was Killed. An Unknown Number Of Miners And Police Were Wounded. This Monument Is Dedicated By The Northern District Miners Womens Auxiliary To Honour All Of Those Who Endured The Lockout And Who Were At Rothbury. Monday, December 16th, 1929."

Belford
Located 8 km west of Branxton is the tiny settlement of Belford which is the home of the Australian wine industry. Amusingly Belford was surveyed in 1833 and again in 1854. The village was originally known as Jump-Up Creek. James Busby (1801 – 1871) who is widely regarded as the "father" of the Australian wine industry planted his first grape vines on his property Kirkton, which is located at Belford in the Branxton district.

* Prior to European settlement the district was home to the Wanaruah First Nations people.

* Branxton was originally known as Black Creek. It was part of William Bowen's Farmborough estate.

* In 1824 the property known as Corinda was granted to Archibald Bell for his contribution to crossing the Blue Mountains.

* By 1835 John Busby had settled at Kirkton about 5 km north of Branxton. It was here that Busby's son, James Busby, brought about half of 700 European vine cuttings and thus became the first person to grow grapes in the Hunter Valley.

* Black Creek was renamed Branxton in 1848. At the time the land was subdivided and sold.

* By 1860 a village with about 500 residents, a steam mill, a post office, a mechanics institute and four hotels had grown up.

* By 1860 the main road through town was dominated by Victoria House, a two-storey general store.

* The local police station was completed in 1880.

There is no Visitor Centre in Branxton. The closest is Maitland Visitor Information Centre, Ministers Park, 258 New England Highway and High Street, tel: (02) 4931 2800.

There is a useful local website. Check out https://huntervalleyvisitorcentre.com.au/plan-your-visit/explore/branxton-greta. 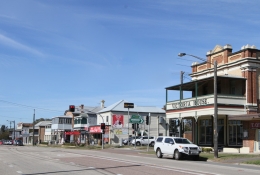 The New England Highway through Branxton. 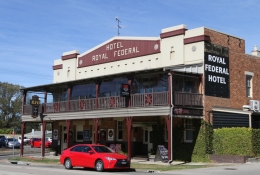 The Royal Federal Hotel - the only hotel left in town. 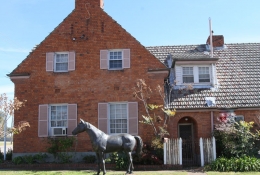 Old Bank of New South Wales and statue of a horse. 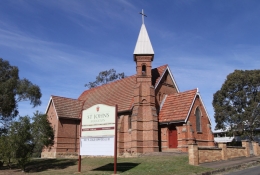 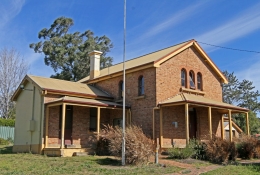 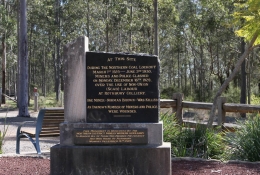 The Rothbury Riot Memorial on the road from Branxton to Pokolbin.