Brewarrina, or "Bre" as it is known, is an historic and fascinating town on the Barwon-Darling River. With 68% of the local population identifying as indigenous it is essentially an Aboriginal town. The appeal of the town, apart from its obvious historic importance, lies in its essential rural laziness. It has a wide main street, old style pubs, beautiful parks by the Barwon River and an historic court house and Anglican Church. It is a sleepy town with a remarkable history.

Brewarrina in far north-western New South Wales is located 765 km via Narromine and Nyngan, 797 km from Sydney via Dubbo and the Castlereagh Highway and 833 km via Narrabri. It is 98 km up the Darling-Barwon River from Bourke and, although it is hundreds of kilometres from Lake Alexandrina and the Great Southern Ocean it is only 119 metres above sea level.

There is no consensus on the precise meaning of Brewarrina. In fact there is an almost bewildering number of possible meanings including 'clumps of acacias', 'where the gooseberry grows', 'fishing' and 'place of gooseberries' coming from 'bre' or 'burie' or 'biree' meaning 'gooseberries' and 'warrina' meaning 'place of'.

Aboriginal Stone Fisheries
It is hard to underestimate the importance of the Aboriginal stone fish traps which, at 40,000 years old, may be the oldest man-made structures on the planet. It has a chequered career in recent times. One time I visited in the early 1990s and it was easy to see. When I returned in 2007 reeds had grown over much of the fish traps.

The fisheries are pieces of masterful ingenuity designed to trap the fish and to be sealed off so that the fishermen can catch and kill the fish at their leisure.

In 1901 R. H. Mathews wrote this description of the process: 'During the early spring months of the year, or at any time when there was a fresh in the river, the fish travelled upstream in immense numbers. The stone pens or traps had their open ends towards the direction from which the fish approached ... as soon as a sufficient number of the finny tribe had entered the labyrinth of traps, the openings were closed by means of large stones which had been placed alongside ready for use ... The natives next entered the pens and splashed the water with their hands or feet, thus frightening the fish into the smaller enclosures, where they were more easily caught.'

Such was the success of this process that Brewarrina became a gathering point for Aborigines from all over the area.

In her book Old Days, Old Ways, Dame Mary Gilmore records: 'two of my uncles said they once witnessed what they reckoned were five thousand blacks assembled (at Brewarrina), and people who were older said that before the massacres began there were even larger gatherings.

Christ Church
Christ Church, Church of England on Bathurst Street, was opened on 11 May 1879. It was designed by the famous church architect Edmund Blacket who designed over 100 churches in rural Australia as well as St Andrews Cathedral in Sydney and the quadrangle at Sydney University. In a book on Blacket, Christ Church is described as  'a small Blacket rural church with long lancet windows and central west buttress with a bell-cote of the Raymond Terrace type'.

Aboriginal Cultural Museum
Located at the corner of Bathurst and Darling Street, the Aboriginal Cultural Museum tells the stories of the local Aboriginal people through displays and guided tours. It is proud to tell the story of the local community describing the experience as "Indigenous outback legends are shared via a blend of storytelling, guided tours, performance, audio visual technology and personal recollection.  The story through time is fraught with emotion – expect deep sadness, anger, wonder and laughter as well as a real sense of the persistent dignity and survival of Indigenous Australians. Above all else expect to find hope for an Australian culture and indeed a world culture of true and mutual respect.  In the ancient tradition of storytelling the Ngemba, Ualarai, Weilwan and Baranbinja people trace the footsteps of their ancient ones, sharing stories that many thought long since forgotten. These are true stories, important stories. These stories belong to all Australians." It is open from 9.00 am - 3.00 pm and the tours of the museum include a tour of the fish traps. More information is available by contacting (02) 6830 5152.

Modern Fishing
The Brewarrina Weir, upstream from the Aboriginal fisheries, has created an ideal location for anglers wanting to catch cod, yellow-belly, catfish and bream. Fishing licenses can be obtained from the Brewarrina Newsagency.

Historic Bridge on the Barwon
This bridge on the Barwon was completed and opened in 1889. Take the road off the main street to Walgett - Goodooga, pass over the billabong and the Barwon River is a few hundred metres further on. The bridge could be raised and lowered to allow the steamers which plied the river to pass underneath its road span.

The NSW Roads website describes the bridge: "The Brewarrina Bridge over the Barwon River is a wrought iron lift bridge with timber beam approaches. The upper framework is fully braced to hold the tops of the posts in position in all directions. The main span is supported on two piers made from pairs of tubes fabricated from curved and shaped wrought iron plates riveted together, and with cross ties attractively shaped to form a vertical set of elliptical holes.

The main span is 16.8m in length and there are four approach spans on each side, all approximately 9m in length. The overall length is 91m and the Bridge has a single lane 4.5m wide between kerbs. The roadway is carried on cross girders covered with timber deck ... The bridge has high historical significance because it is the second oldest lift bridge in New South Wales. It, and the lift bridge at North Bourke, are the only surviving examples of the first series of lift bridges in New South Wales. It has been an important item of infrastructure in the history of New South Wales and is associated with the history of the River Trade because it helped to "capture" the New South Wales wool trade from the river paddle steamers and direct it away from Melbourne and Adelaide to Sydney. It is associated with Percy Allan and E M de Burgh. It significantly helped open up north western New South Wales." It was damaged in 2000.

"The local Aboriginal Land Council of Brewarrina has erected a monument at this historic site, which can be viewed from the road. Situated 15 km from Brewarrina along the Goodooga Road, the monument stands at Hospital Creek on the left hand side of the road. Kerrigan recorded, "Apparently a white stockman was lost and feared he had been killed by blacks, a strong search party from wide area was made up. The part came across the tribe moving up the Bohara and along a dry watercourse to Narran Lake. The search of a dilly bag found a hand, the carrying of which was a common practice; whether it was the stockman's is unknown, or if he was found later is uncertain, so they rounded them up like cattle, old and young, on the Quantambone plain, and shot them, there was about 400, and that was how Hospital Creek got its name." Taken from: Aboriginal Fisheries of the Darling-Barwon River by Peter Dargin.

"However, some Aboriginal elders say that the massacre was caused by two young Aboriginal men who killed a young steer on a property near the Darling River. When the station stockmen found the carcass, they tracked the killers back to Hospital Creek, where they massacred every Aboriginal they saw. It is unknown exactly how many were killed, however, some stories suggest that there were at least 400 Aboriginal people slaughtered." For directions to the monument ask at the Brewarrina Visitor Information Centre.

* Some 40,000 years ago local Aborigines built the first fish traps on the Barwon River.

* Prior to European settlement the area around Brewarrina was home to the Ngemba people. It was also a place where the Ualarai, Wailwan and Barkindji people gathered and fished.

* European settlers moved into the district around 1839-40. The earliest settlers were the Lawson brothers who had two holdings named 'Walcha' and 'Moona'. The settlement was initially known as 'Walcha Hut' but this changed to 'Fishery' and finally to 'Brewarrina'.

* In 1849 up to 400 Aborigines were killed in the Hospital Creek Massacre.

* In 1859 a riverboat named Gemini skippered by William Randell reached the town. This opened up the possibility of the town developing as a port and

* by the early 1860s it was recognised as the head of navigation on the Darling River. * The town was formally surveyed and laid out in 1861 and proclaimed on 28 April 1863.

* In 1873 the Brewarrina Mechanics Institute was formed. The telegraph reached the town.

* By 1874 two hotels, two stores and the Commercial Bank had all opened and there was a Cobb & Co service from Byrock, one from Dubbo via Warren and a direct service from Brewarrina to Enngonia.

* In 1879 Christ Church, Church of England, was consecrated

* In 1889 the bridge across the Barwon was opened.

* In 1896 Cobb & Co were running a weekly service from Brewarrina to Girilambone.

* In 1901 the railway finally reached the town.

* In 1987 Lloyd Boney died in police custody leading directly to the Royal Commission into Deaths in Custody.

The Brewarrina Shire Council website has a special section devoted to the attractions and activities in the area. It also has a comprehensive list of the accommodation options in the district. Check out https://www.brewarrina.nsw.gov.au/tourism/attractions-activities.aspx for more details. 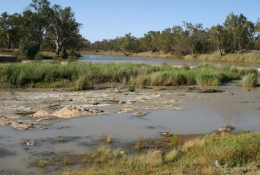 The rock fish traps partially covered by reeds in 2008. 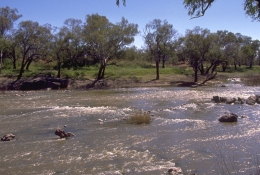 In 1990 there were no reeds and the rock fish traps could be easily seen. 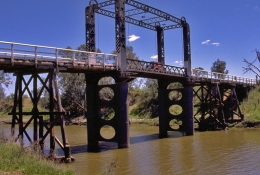 The historic bridge at Brewarrina 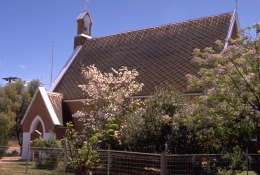 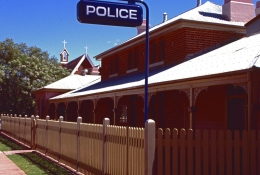 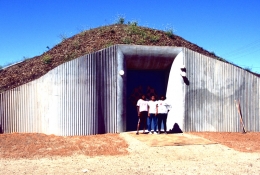 The early days of the Aboriginal Cultural Museum with three local helping in the construction. Pic. 1992.