Historic town near Hobart with one of the country's oldest buildings.

Bridgewater, which is now only 20 km from the centre of Hobart, has become a commuter suburb for the city. It wasn't always this way. In the early nineteenth century it was a vital link on the north-south route from Hobart to Launceston with one of Tasmania's earliest buildings and the remarkable achievement of the causeway which helped to cross the Derwent River.

Bridgewater is located 20 km north of Hobart via the Midland Highway. It lies on the northern bank of the Derwent River.

Another example of the "bleeding obvious". The settlement was originally known as Green Point until it became known as Bridgewater simply because it was the bridge (actually a causeway) crossing a shallow section of the waters of the Derwent River.

The Old Watch House
Located at the southern end of the Bridgewater Causeway, the Old Watch House was  built by convicts in 1838. It is now almost unrecognisable but, if you look carefully, you can identify the quarry which was used to provide the fill for the causeway. The building still contains the notorious solitary confinement cell which was used to punish convicts working on the causeway.

Black Snake Inn
Located at 650 Main Road, Granton is the former Black Snake Inn which was built by the convicts who were constructing the Bridgewater Causeway. It was opened in 1833 and operated until 1860. There is an image of the original Inn at http://catalogue.statelibrary.tas.gov.au/item/?id=98999. It also shows the ferry across the Derwent.

Hestercombe Chapel
Hestercombe Chapel was built in 1833 by the Hobart merchant, Henry Hopkins, and is the oldest Congregational Church in Australia. It is a small, unimposing, grey building. A monument to Protestant simplicity its only concessions to luxury being a fireplace (to warm the church in winter) and a tiny organ.

Austin's Cottage
On Austins Ferry Road  is a simple, stone cottage which was built by the convict James Austin in 1809 shortly after he was released from custody. It is recognised as one of the oldest buildings in Australia. James Austin sailed on the HMS Calcutta in 1803, arrived in Sydney and was transported to Van Diemen's Land the following year. He had been transported because he had stolen beehives valued at thirty shillings. He built this simple cottage and named it, and his small farm, Baltonsborough after the village of his birth, south of Bristol in Somerset, England. In 1816 Austin and his cousin James Earl established the first ferry service across the Derwent River and it remained the main transport route from Hobart Town to Launceston until completion of the Bridgewater causeway in 1836. The cousins also built a two storey inn, known as Baltonsborough but more commonly just as Austin's Inn, which stood near the ferry and supplied accommodation and "very good porter" to those travellers making their way north towards Launceston and the "interior".

* Prior to European settlement the district around Bridgewater was inhabited by the Paredarerme Aborigines.

* The location, which was used for crossing the Derwent, was originally known as Green Point.

* The first ferry service across the Derwent was established in 1816 by James Austin and his cousin James Earl. It remained vital to travellers journeying from Hobart Town to Launceston until the completion of the causeway.

* In 1829 construction began on a causeway across the Derwent River. It was 1.3 km long and was built by a gang of 200 convicts using nothing but wheelbarrows, shovels and picks. By the time it was completed the convicts had shifted 2 million tonnes of sand, soil, stones and clay. Defined as secondary punishment for serious recidivists, if the convicts were adjudged to have not done a full day's work they were placed in solitary confinement in a cell which was only 2 m high and 50 cm square.

* The causeway was completed in 1836. It did not traverse the river and so a ferry plied the deepest section of Derwent River for twenty years from 1829-49.

* Near Bridgewater, at Austins Ferry, Hestercombe Chapel, the oldest Congregational Church in Australia, was built in 1833 by the Hobart merchant, Henry Hopkins.

* In 1849 a bridge across the Derwent was opened. Bridgewater, which had been laid out on the southern shore, was moved (down to the last surveying detail) to the northern bank. The original town plan can still be seen near the Old Watch House.

* In the 1970s the area saw a public housing broad-acre estate which gave it a reputation. "By 1997, Bridgewater was considered to have Australia's lowest level of wellbeing. Whole streets of public housing stood vacant, houses smashed and torched. Housing Tasmania administrators remember people writing on their applications that they wouldn't live in Bridgewater or Gagebrook – no matter how desperate they were."

* By 2003 Bridgewater was experiencing a housing boom and property prices, particularly for houses and land overlooking the Derwent River, tripled and quadrupled.

* Today travellers tend to pass through Bridgewater without pausing to recall its important history.

There is no Visitor Information Centre at Bridgewater.

A very detailed history of the area, including old photographs and paintings, can be found at http://www.watersideaccommodation.com/downloads/HistoricalSummarytheClaremontAustinsFerryArea04May07.pdf 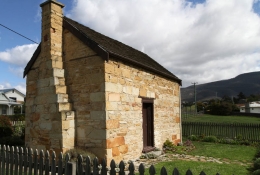 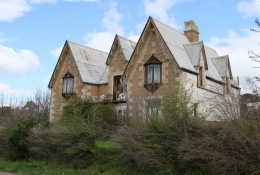 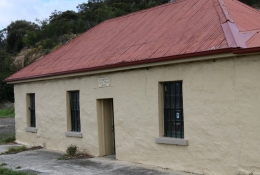 The historic Watch House built by convicts in 1838. 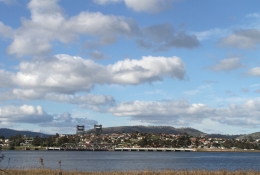 The old causeway built by convicts between 1829 and 1836 connects to the bridge completed in 1946.