The attractive holiday town of Bridport is situated at the southern end of Anderson Bay. It is noted for its many walking tracks, its excellent sea and river fishing, its swimming and beach facilities, its holiday atmosphere, and the compelling beauty of its granite rocks, its safe and attractive beaches and its unspoilt foreshore.

Bridport is located on the southern shore of Anderson Bay 277 km north of Hobart and 84 km north-east of Launceston via the Tasman Highway.

Bridport takes its name from the town of the same name in Dorset, England. It is no accident that the local council is the Dorset Council.

Walking around Bridport
At the Bridport Pavilion Information and Craft Centre (in the centre of the town) you can purchase Bush and Beach Walks Around Bridport by Michael Douglas which lists and details a staggering 22 walks ranging from the popular 3.8 km Foreshore Track and History Walk to the 10.8 km Bridport Circuit and the 17 km Waterhouse Beach and Croppies Point. The book comes with simple, hand drawn maps (they are easy to understand and they work) and very detailed instructions which include the geology of the walk, the fauna and flora which can be seen and interesting anecdotes and local information.
For example: The Bridport Foreshore Track includes a geological map and information that the walk includes a National Heritage listed geological feature; a description of the flora "Trees and tall shrubs seen here include Drooping Sheoak, Silver Banksia, Native Hop, Boobyalla, Blackwood, Prickly Box, Coast Beard Heath and the eucalypts - White Gum and Black Peppermint."; and the amusing information that "the Old Pier is the remnant of the Granite Point Pier, built in 1916. It was the terminus of the 28 km Forester to Bridport Tramway which brought sawn timber to the port for shipment to Melbourne, during the period 1913-25. This pier was partially burned by arsonists in 1938 and finished off by another fire in 1941."

The Bridport History Walk
There is a free brochure at the Pavilion Information Centre which lists the main places of historic interest in the town. Each place has a very detailed sign with interesting text and important historic photographs.

Bridport Circuit Walking Track
An 10.8 km multi-nature walking track which includes river, forest, foreshore and wildflower experiences, this is a superb way to experience the beauty and diversity of Bridport. Check out http://bridportwalkingtrack.com.

Barnbougle Dunes Golf Course
Located on Waterhouse Road this delightful course has panoramic views across Bass Strait and a course which has been described as "a mix of voluptuous dunes, sandy waste and rough typical of a links course. The same blend of fescue grass extends from tee to green, and there is dramatic movement in its bumpy fairways and rolling greens." It has been rated Australia's No.1 Public Golf Course and the 35th best course in the world. The golf course website points out that "Barnbougle, still only in its youth, continues to gain a reputation as one of the world's top links golf courses. The breathtaking landscape upon which the course has been created mirrors the wild coastal links courses of Scotland and Ireland and as Barnbougle continues to develop with age it looks set to follow in the footsteps of these great courses." There is accommodation available. Check it out at https://barnbougle.com.au.

Bowood
Located 12 km from Bridport, Bowood is the oldest building in north-eastern Tasmania. A handsome Georgian stone, brick and pit-sawn timber dwelling it was built in 1838 for Peter Brewer. The building team comprised an ex-convict carpenter and an American stonemason who had deserted from his sealing ship. It was eventually sold to the Hurst family who, over generations, built the surrounding land from 15 acres (6 ha) of cleared land to a property of 33,000 acres (13,354 ha). When it was sold at auction in 2005 it was bought by a local potato farmer for $7.75 million. Apart from the historic home the price included "three other houses and assorted sheds, almost 1,800 ha of prime grazing and cropping land, 400 Angus cattle, and a large flock of medium-fine wool sheep." The house is not open to the public.

Waterhouse and Waterhouse Conservation Area
Located 27 km to the east of Bridport is the ghost town of Waterhouse which briefly flourished when gold was discovered in the vicinity in 1869. The goldrush lasted until 1875 but in that time the township managed to acquire four hotels, a gold commissioner and police station. Off the coast is Waterhouse Island which was named by Bass and Flinders in 1798.

The Parks and Wildlife Service website (http://www.parks.tas.gov.au/indeX.aspX?base=4140) points out that "The Waterhouse Conservation Area in Tasmania's north-east contains many wetland communities, including three major permanent deep-water lagoons - Blackmans Lagoon and Big Waterhouse and Little Waterhouse lakes. Little Waterhouse Lake is listed under the Ramsar Convention as an internationally significant wetland. It is a very productive lake, supporting a high diversity of species, including species of particular conservation significance such as the rare Wolfia australis, the smallest flowering plant in the world. Extensive, relict dune systems formed during the Ice Age can be seen in the north of the reserve extending from Croppies Points through to Tomahawk Beach. The Waterhouse Conservation Area encompasses a diverse range of vegetation communities, including one of the largest areas of heathland on the north-east coast, a vegetation community which has been greatly reduced in extent since European settlement. These diverse habitats support a rich fauna. Nine threatened species of bird and at least three, and possibly four, of Tasmania’s six species of threatened mammals are found in the reserve, as is a rare freshwater fish - the dwarf galaxias - and the vulnerable green and golden frog. Blackmans Lagoon and its feeder creeks constitute probably the single most important site in the State for the green and golden frog." It is an area of historical and ecological importance.

* Prior to European settlement the area around Bridport was inhabited by the local Pyemmairrener Aboriginal people, and particularly the Leenerrerter clan, who had lived in the district for thousands of years.

* In 1798 Bass and Flinders passed along the coast where the modern townsite now lies during their exploration of the Tasmanian coastline.

* In 1830 Thomas Lewis, a surveyor, explored the area and became the first European to travel through the district.

* The first settlers were Andrew and Janet Anderson who were granted 1,800 acres (728 ha) at Barnbougle in 1833. Anderson Bay is named after them. Two years later Peter Brewer was granted 500 acres (202 ha) upon which he built the impressive 'Bowood'.

* In 1836 James Scott surveyed the future town but it was another thirty years before they were sold.

* By the late 1830s Chinese tin miners had arrived in the area.

* In 1859 blocks of land were sold and a shed was erected near the bar created by Great Forester's River. Around this time a policeman arrived in the district.

* By 1868 a small hamlet had been established at the mouth of the Brid River.

* In 1869 Lewey Richardson discovered gold at Waterhouse. The goldrush was shortlived. By 1875 the area had been exhausted.

* In 1875 tin was discovered inland from Bridport. This turned the small settlement into a busy port.

* In 1876 Captain William Henry Jones, who had been moving goods and passengers in and out of Bridport in his ship, Bessie, built the Forester Inn. He sold anything and everything.

* In 1889 the economy of Bridport collapsed when the railway line between Scottsdale and Launceston was opened.

* In 1911 the Forester Timber Mill was opened and 20 km of railway line and two jetties were constructed to transport the timber.

* By the 1920s Bridport had become a popular holiday destination. Around this time it was called the "Riviera of the North Coast".

* The Forester Timber Mill closed down in 1930.

* A jetty was built near the bridge across the Brid River in the 1940s.

* In 1947 Fish Canneries of Tasmania established a processing factory in the town.

The Bridport Walking Track site has an excellent and detailed overview of the history of the area. Check out http://bridportwalkingtrack.com/the-walk/history/ 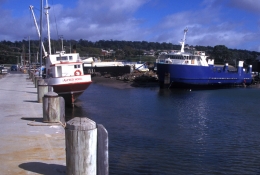 Boats at the wharf at Bridport (photo taken 1999) 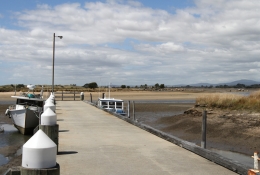 The wharf at the mouth where the Brid River enters the channel. 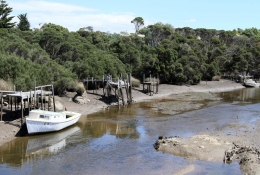 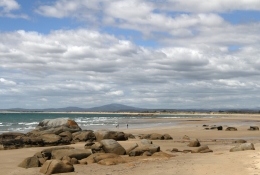 The beach at Bridport from Murphy's Beach. 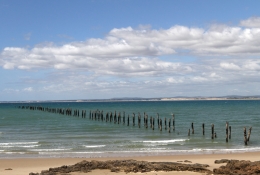 The Old Pier at Murphy's Beach. 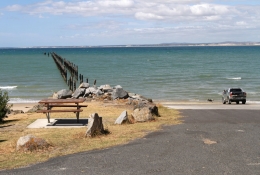 The Old Pier and boat ramp at Murphy's Beach. 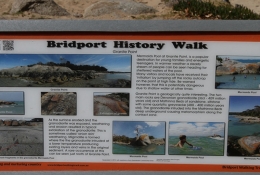 The signage on the History Walk is detailed and informative.