Pretty town on the edge of the Victorian Alps.

Bright is one of those towns where, because of the extensive planting of European trees, it is overwhelmingly and naturally spectacular in spring and autumn. Nestled in the beautiful Ovens Valley and surrounded by the Australian Alps, it is awash with colours in spring and ablaze with orange, red, gold and yellow in autumn. Spring and autumn are times that draw crowds who are happy to simply walk or cycle around the area soaking up the crisp air and enjoying the beauty of the oaks, chestnuts, poplars, elms and Japanese maples, and the tall pines and eucalypts in the mountains. Delaney Avenue, with its alternating Himalayan cedars and scarlet oaks, is particularly impressive.
In the spring the mountains are carpeted with wildflowers, the alpine peaks are still snow-covered and the mountain streams flow with melting ice. After winter the willows, wattles, plum and apple orchards are bursting with buds and new growth.
Bright is a tourist destination where visitors can play golf, bowls, croquet, tennis, squash or go flying, gliding, hang-gliding, horse riding or pan for gold. Winter is the time for skiing; spring is perfect for bushwalking; summer is ideal for swimming, canoeing and boating; and autumn is for gazing in wonder at the colours. Bright is a good option those planning to ski at the nearby resorts of Mt Buffalo, Mt Hotham and Falls Creek who do not want to pay for the chalets and accommodation at the ski fields.

Bright is located 310 m above sea level on the edge of the Snowy Mountains. It is 327 km north-east of Melbourne via the Hume Freeway and 77 km south-east of Wangaratta via the Great Alpine Road.

When the township now known as Bright was first surveyed in 1859 it was called Morse's Creek. In 1866 its name was officially changed to honour John Bright, who, at the time, was the MP for Birmingham in England. He was a noted British liberal politician and advocate of free trade.

Trees in Bright
The town's major tourist attraction is its proliferation of European deciduous trees including oaks, elms, poplars, maples, dogwoods and chestnuts many of which were planted as early as 1866. By 1887 they had grown to a point where one observer noted that they "serve to revive old England in a way that probably no other town in the Australian colonies can do." It is likely that the planting of trees in the town was the result of an active program by Ferdinand Mueller, the Government Botanist who, in 1873, provided the ornamental trees for the Bright Cemetery. The autumn colours are celebrated each year. For details and dates check out http://www.brightautumnfestival.org.au/ which offers comprehensive information.

Park Street Court House and Lockup
The Bright Court House in Park Street was built in 1861 to a design by the Public Works architect, JJ Clark. It became the Court of Petty Sessions for the Buckland District. With its sheltered veranda and the stepped frieze and large circular vent of the gable, it became a model for up to twenty other court houses in Victoria. Next to the court is a rough-hewn log lock-up with a shingle hip roof which has been covered with corrugated iron. It was built in 1860 and transferred to its present site in 1873.

Churches in Bright
There are a number of interesting churches in Bright which are well worth encompassing in any walk around the town. The closest to the centre of town is the handsome Anglican Church, just up from the War Memorial in Church Street, which dates from 1870. Nearby is the Methodist Church in Ireland Street which was constructed in 1884 and became the town's Uniting Church in 1977.

Bright & District Historical Society Museum
The railway from Wangaratta reached Bright in 1890. A few years later the community  lobbied for an improved station and that was built in 1900. That station is now used as a museum which "features local railway and general exhibits from pioneer families" and is open Sundays 2.00 pm - 4.00 pm and Tuesdays and Thursdays 2.00 pm - 4.00 pm during School Holidays and during festivals. For more information tel: (03) 5755 2098.

Murray to Mountain Rail Track
This is the best of all possible cycling worlds: there are over 100 km of sealed off road trails from Bright to Rutherglen, Beechworth, Milawa, Wandiligong and Wangaratta. The detailed website - http://www.murraytomountains.com.au/ - provides information on the trail, a range of downloadable maps from specifics (Myrtleford to Bright Section Map - http://www.murraytomountains.com.au/media/8683/myrtleford_to_bright.pdf) to information about road riding, mountain biking and the accommodation available along the way.

Clearspot Lookout
Clearspot (don't you love the name) is recognised as the best and most accessible lookout around Bright with panoramic views over the town. It is easily accessible via Cobden Street and Bakers Gully Road. If offers excellent views across Bright to the surrounding foothills of the Snowy Mountains.

Wandiligong
Located 6 km to the south of Bright is the village of Wandiligong which has been classified by the National Trust. At its peak this historic goldmining town had a population of over 1,000. The sensible way of experiencing the town is simply to walk and admire the buildings. The Church of England and Manchester Unity Hall (1874) are worth inspecting as are the rotunda and two storey pavilion in the park which are re-created replicas of the original buildings which were built in the 1860s. The district also has a row of noted Wandi Poplars which are at their best in the autumn. The area is known for its apple orchards, its nuts (they even have a nut festival) and it is still possible to pan for gold. Check out http://www.brightvictoria.com.au/wandiligong.aspx for additional information.

Wandiligong Maze and Cafe
Wandiligong is home to the largest living hedge maze in the country which was started in 1990 when 850 Cypress Lambertiana were planted. The maze has two kilometres of pathways. It is open from Wednesday to Sunday from 10.00 am - 4.30 pm and, during Victorian school holidays from Monday to Friday from 10.00 am - 4.30 pm. There is also mini golf and a cafe.

Mount Buffalo National Park
Mount Buffalo is spectacular. Its dramatic granite cliffs, its grand vistas, its excellent bushwalking tracks, its rich wildlife (wombats, lyrebirds) and flora (snow gums, wildflowers), its excellent cross country skiing in winter and rock climbing in summer, its unusual waterfalls, and its pristine beauty all combine to make it a very special National Park. Geologists have determined that Mt Buffalo was once three times its current height (1723 m). The 31,000 ha National Park now comprises the entire plateau and most of the forested foothills. It is covered with striking rock formations  and huge sheets of granite. Check out https://www.aussietowns.com.au/town/mount-buffalo-vic for more details.

* Prior to European settlement the area around Bright was inhabited by members of the Theddora-Mittung group of the Jaitmatang Aboriginal language group.

* The first Europeans to pass through the area were the explorers, Hume and Hovell, in 1824 on their way from New South Wales to Port Philip Bay. They both commented on the beauty of the area with Hovell describing it as "as pretty a spot and as valuable as any I have seen since leaving home" and Hume noting "the honeysuckle and grass trees are growing here well - we find the land to be good."

* By the late 1830s the area was being settled with sheep and beef raising being the predominant land use. Hamilton Hume's brother-in-law, Dr Mackay, was one of the first settlers but the antagonism of the local Aborigines forced him to move away.

* In 1845, Thomas Buckland established the area's first cattle run near what would become known as Buckland River.

* In 1853 W.H. Pardoe discovered gold along the Buckland River and within six months there were 3,000 diggers fossicking on the river bed.

* When European miners left the area the Chinese arrived and started re-working the abandoned claims. This led to inevitable antagonism so that when a Chinese temple was built in 1857 the miners reacted. On 4 July, 1857 a meeting of miners decided to evict the Chinese at gunpoint. This resulted in riots where a Joss House, stores and dwellings were destroyed; the Chinese were robbed, beaten and chased into the river; others were shot and buried. By the time the Beechworth police, under the command of Robert O'Hara Burke (of Burke and Wills fame), reached Bright, 2,000 Chinese had either been massacred or had fled.

* Later in 1857 police camp was established on the goldfields and the emergence of a settlement saw the construction of permanent buildings.

* The discovery of a rich quartz reef in late 1857 ensured that gold mining continued in the district for the next fifty years.

* By 1861 Bright was the administrative centre for the Buckland Gold District. Shortly afterwards it changed from Morse's Creek to Bright.

* The area's first sawmill was built in 1872 and a timber industry became important to the economy of the town.

* By 1899 dredging for gold was commonplace along the Ovens and Buckland Rivers and Morse's Creek. At one stage there were 42 dredges in operation.

* The first pine plantation was planted in 1916 thus ensuring the continued importance of the timber industry.

* In 1929 during the Depression the pine plantations provided employment with workers planting pine trees on the steep slopes.

* In 1952 the railway to Bright stopped operation.

* Since World War II tourism has been Bright's principal source of income. The town's population increases dramatically during the holiday season. 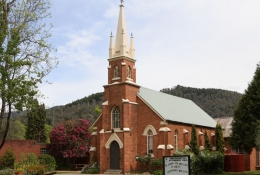 The Anglican Church in Church Street dates from 1870. 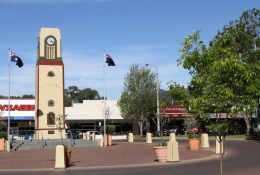 The memorial clock tower in the middle of town. 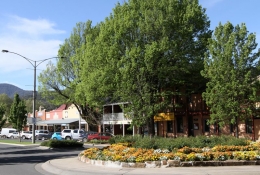 In spring and summer the central square is verdant and colourful. 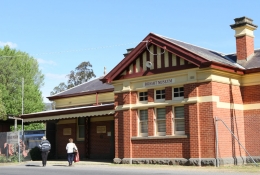 The Bright Railway Museum in the town's old railway station (1900). 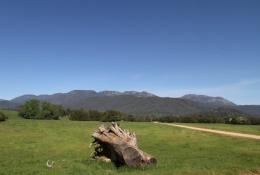 The view of Mount Buffalo from the road near Bright.