Brindabella is a quiet and particularly beautiful valley on the edge of the Snowy Mountains. The road from Canberra to Tumut (which is often cited as a road that desperately needs upgrading) is a narrow dirt track through rugged mountains and across the Brindabella Valley. The valley looms large in Australian literary history for it was here that Miles Franklin, one of the nation's iconic writers, grew up. The Franklins have lived in the valley since the 1840s. Today the valley has become a popular weekend retreat for people from Canberra. You can't blame them.

It is claimed that 'brindabella' means 'two kangaroo rats' in the language of the Ngunawal, Walgalu and Djimantan Aborigines who lived in the valley before European settlement.

Brindabella Homestead
Brindabella Station is famous because it is the setting for one of Australia's most beloved works of fiction, My Brilliant Career by Miles Franklin. At the moment the Brindabella Homestead is not open for inspection and, not surprisingly, since the 1880s when it was Miles Franklin's family home, it has changed enormously. It is possible to identify the Franklin homestead from the main road. Both the home and the outbuildings have very distinctive red roofs. It is positioned near the Goodradigbee River and surrounded by European deciduous trees which are particularly impressive in spring and autumn.  The closest the visitor can get to the homestead is at http://www.brindabellastation.com.au because it is up for sale (in 2015) and there is a full complement of photographs which capture perfectly the way the station looks at the moment.

Brindabella National Park
The primary appeal of the Brindabella National Park, which lies on the edge of the Australian Capital Territory, is that it is an area of rugged, undeveloped bushland within easy reach of the nation's capital. It has a number of campgrounds, some excellent 4WD tracks, and Flea Creek is an ideal place for a picnic. Surrounded by casuarinas it is home to a myriad of birds including yellow-tailed black cockatoos, peregrine falcons, pink robins and olive whistlers. For more information check out http://www.nationalparks.nsw.gov.au/brindabella-national-park.

* Prior to the arrival of Europeans the Brindabella Valley was occupied by the Ngunawal, Walgalu and Djimantan Aborigines.

* As early as the 1830s the rich valley was an outstation for the Yarralumla property which covered an area now populated by southern Canberra. T

* In 1849 Joseph Franklin purchased land in the valley but the local Aborigines were unhappy and they killed his cattle and drove him out.

* Franklin eventually returned in 1863. By this time the gold miners who had passed through the valley had "removed" the local people.

* Miles Franklin was born at Talbingo in 1879 and grew up in Brindabella where she was educated by a private tutor, Charles Blyth.

* In 1889 the Miles Franklin's family moved to Goulburn.

* By 1897 Miles Franklin was working as a governess near Yass. It was here that she completed her most famous book, My Brilliant Career.

* Today the Brindabella Valley is a popular weekend retreat for people escaping from Canberra including television personalities and senior public servants.

There are no eating facilities in the valley.

There are no websites dedicated to Brindabella. 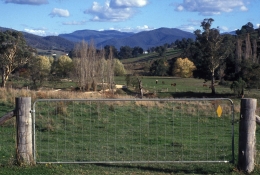 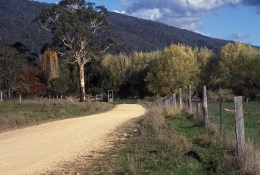 The quiet charm and gravel roads in the Brindabella Valley. 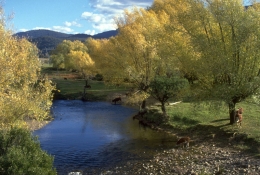 The Goodradigbee River runs through the Brindabella Valley