Quiet mountain retreat on the edge of suburban Brisbane.

Brisbane Forest Park lies to the west of Brisbane CBD and, because it is only 13 km from the centre of the city, its combination of reservoirs, spectacular views over the city and the surrounding coastal areas, and excellent bushwalks have made it a magnet for city dwellers wanting to escape from the rush of the city. The park, which is part of the larger D'Aguilar National Park, is a large tract of mountainous land characterised by the coolness and tranquility of the eucalypt forests. The D'Aguilar National Park is divided into two distinct sections—South D’Aguilar which is known as the Brisbane Forest Park and Mount Mee which lies to the east of the Somerset Dam. It is a beautiful area of gullies, rainforest, dramatic views and excellent bushwalks and picnic areas. A perfect escape from Brisbane city.

The Brisbane Forest Park, now known as D'Aguilar National Park, is 13 km west of the Brisbane CBD along Route 31.

The name is self-evident and suitably descriptive. Brisbane was named after Sir Thomas Brisbane, Governor of New South Wales (1821-1825).

Enjoying and experiencing Brisbane Forest Park is remarkably easy. It is literally no more complex than driving west on Mount Nebo Road until you reach the amusingly named Mount Glorious. The main attractions - the views at McAfee's and Jolly's Lookouts, the excellent walks on the Auraucaria Track, Thylogale Walking Track and the Greene's Falls Walking Track - are all located just off the road. There is an excellent map available at the Walkabout Creek Wildlife and Visitor Centre. The centre, which is clearly signposted off Mount Nebo Road, can advise on the best places to visit in the park. In total the Brisbane Forest Park map describes twenty walks, lookouts, picnic destinations and places of interest starting with two walks at the Information Centre.

2. Walkabout Creek Wildlife and Visitor Centre
There are two delightful walks from the Information Centre. The Corymbia Circuit is a short 1.5 km walk through a wet sclerophyll forest gully and the Araucaria Track (5 km return, 90 minutes) heads down the hill to the edge of the Enogerra Reservoir a delightful stretch of artificial water created in the 1860s and now used as a place for picnics, swimming, bushwalking (around the shores of the reservoir) and canoeing.

3. Bellbird Grove
Bellbird Grove is primarily an area for people wanting to stop for a picnic or stroll through the surrounding forests. There are two short walks - the Turrbal Circuit (1.7 km, 50 minutes) which is particularly good for bird lovers and the Golden Boulder Track (1 km circuit, 40 minutes) which passes the remains of historic gold mines.

5. Camp Mountain Lookout
The Cape Mountain Lookout offers some of the best views over Samford Valley. The elevation is such that it overlooks Brisbane city, providing an excellent opportunity to survey the city's suburban sprawl and the rich farmlands which lie below the D'Aguilar Range. On a clear day it is possible to see the Glasshouse Mountains.

6. Jolly's Lookout
Good picnic facilities and excellent viewing platforms make this one of the area's premier lookouts. It is possible to see Moreton Island, the Glasshouse Mountains and the Brisbane Valley on a clear day. There are two short walks - the Egernia Circuit (1.5 km, 1 hour) and the Thylogale Walking Track (4 km one way, 3 hours return) which passes along the escarpment through rainforest to Boombana.

7. Boombana
There is a short 40 minute, 1.1 km walk through subtropical rainforest which passes a huge strangler fig and orchids and vines. There is a track along the ridge which heads towards the shops at Mount Nebo.

8. Manorina and Mount Nebo
Mount Nebo is a tiny township which has become a popular stopping point on the journey through the Forest Park. It has gift shops, cafes and picnic areas. The Morella Walking Track, 6 km round trip (2 hours return), is an easy walk to Mount Nebo Lookout which provides views across the Samford Valley and Moreton Bay.

9. Westridge Outlook
Westridge Outlook offers views over Lake Wivenhoe. Bellbirds can be heard from the lookout which is surrounded by tallowwood, grey gums and spotted gums.

10. Mount Glorious and Maiala
This is the true heartland of the Brisbane Forest Park. From Mount Glorious there are a variety of walks. The most popular walk is a 4.5 km round trip (90 minutes return) from the Maiala picnic ground to the beautiful Green Falls.

* Prior to the arrival of Europeans the area around the Brisbane Forest Park was inhabited by the Turrbal Aborigines who hunted and lived along the banks of the Enoggera Creek.

* In 1859 Queensland separated from New South Wales and the new Brisbane Municipal Council saw the area as a possible source of fresh water.

* By the 1860s settlers had moved into the area and were cutting the timber from the rainforests. There was also low level gold mining at this time.

* In 1864 work started on a reservoir to dam the Enoggera Creek.

* The Enoggera Reservoir was completed in 1866. It was the first municipal engineering project completed in the state.

* By the late 19th century the Enoggera Reservoir had become a popular daytripper destination for people from Brisbane.

* Timber reserves in the area were gazetted in 1918.

* Jolly's Lookout was declared part of a national park in 1938.

* In 1949 Manorina was declared a national park.

* In 1950 Boombana was added to the list of national parks in the area.

* By the 1970s lookouts had been built at both McAfee's and Camp Mountain.

* In 1976 major alterations were made the the Enoggera Reservoir. The dam wall was raised.

* In 1977 the Brisbane Forest Park Act was passed.

The best website for maps and detailed information (all of which can be downloaded) is the Queensland Department of National Parks - D'Aguilar National Park site. See http://www.nprsr.qld.gov.au/parks/daguilar. Of particular use are the PDFs of maps of the area. These are the same maps which are provided at the Walkabout Creek Wildlife and Visitor Centre. 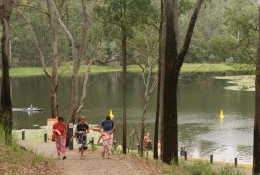 Swimming and relaxing at Enoggera Reservoir 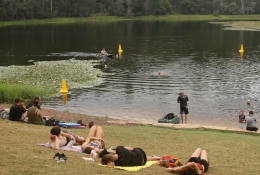 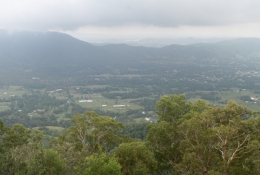 The view from Jollys Lookout is even impressive on a dull and overcast day. 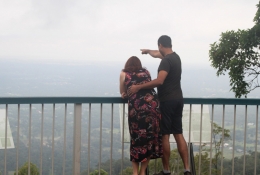 Trying to pick things out through the mist and clouds at Jolly's Lookout. 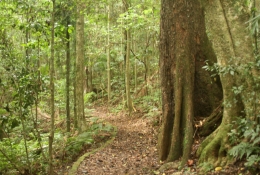 The track through the subtropical rainforest at Boombana. 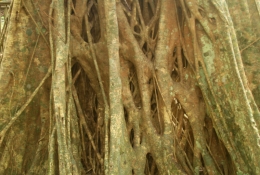 The strangler fig, estimated to be over 200 years old, on the Pitta Circuit at Boombana.