Broad Arrow is a ghost town. It literally has a single pub (the Broad Arrow Tavern) surrounding by remnants of a once-thriving gold mining community. Given that it is on the edge of the desert to the north of Kalgoorlie it has a certain outback romantic charm. Not surprisingly it is included in all the "Ghost Towns" tours from Kalgoorlie.

The ghost town of Broad Arrow is located 633 km east of Perth and 38 km north of Kalgoorlie via the Goldfields Highway.

The local Aborigines, the Wangkathaa, called the area 'kurawah'. It was gazetted as Kurawah in 1896 but was changed to Broad Arrow in 1897 because when the gold prospector O'Mara left Kalgoorlie he told his nephew, who was planning to follow him, that he would mark the route with a number of broad arrows.

Broad Arrow Tavern
This is a town that needs to be experienced rather than seen in terms of attractions. The one building is the Broad Arrow Tavern which was built in 1896 and is considered an authentic outback pub known for its cold beer and its excellent Broady burgers. Back in 1971 the pub featured in the long-forgotten movie, The Nickel Queen, which starred Googie Withers and radio announcer, John Laws. It was directed by Withers' husband, John McCallum.

* Prior to European settlement the area was inhabited for thousands of years by the local Aborigines, the Wangkathaa people, who called the district 'kurawah'.

* Being desert it was not populated by Europeans until 1893 when the prospectors O'Mara, Quinn and Pike discovered gold. Suddenly there was a boom. The richest mines were the Broad Arrow Consols, Hill End (by 1895 Hill End was crushing 18 oz to the ton and had a ten head battery) and Golden Arrow.

* By 1896 the railway had reached the town, the town had been officially gazetted and by 1900 there were an estimated 2,400 residents. This rush of population resulted in eight hotels, (most were little more than tents and shanties), two banks, a cordial factory, two breweries, a hospital with a special fever ward, a stock exchange, a resident magistrate, a number of blacksmiths and even a Dramatic Society.

* By the mid-1920s the rush was over. The miners moved on to other goldfields or returned to Kalgoorlie. Slowly the town, which had only lasted for 25 years, disappeared. This is the nature of gold mining towns.

The people at the pub are happy to help with any visitor information needed. There is also useful information available at the Kalgoorlie Visitor Information Centre, 316 Hannan Street, Kalgoorlie, tel: 1800 004 653. 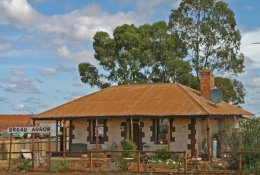 One of the few buildings left standing at Broad Arrow. 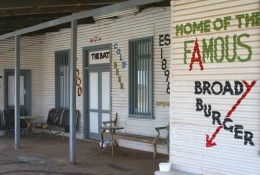 The front entrance to the Broad Arrow Tavern (2003)