A one-time construction village converted to a popular fishing destination.

Bronte Park can hardly call itself a town. It has a general store, an area for camping, a rather large lodge used primarily by anglers and a series of old timber houses, renamed "cottages", which are available for rent by people wanting to explore the area or go fishing. It was once a Hydro-Electric Commission village. It is now recognised as an ideal starting point for trout fishing in the many lakes in the area - some of which date from the last ice age, others of which have been created by the desire to build dams and harness hydro-electricity.

Bronte Park is located 154 km north west of Hobart via the Lyell Highway. It is 157 km from the west coast town of Strahan. It is close to Trig Point 715 which marks the geographical centre of Tasmania.

In the 1940s the Tasmania Hydro-Electric Commission created an artificial lake which they called Bronte Lagoon. It was only a small step to call the village, which they also created, Bronte Park.

The Surveyors Memorial Reserve - the Centre of Tasmania
Located 7 km from Bronte Park, just south of the turnoff onto the Lyell Highway is the Surveyors Memorial Reserve which contains a monument at Trig Point 715 which was erected in 1983 by Members of the Institution of Surveyors (Australian Tasmanian Division) to commemorate the early surveyors who explored and mapped the state. It is located near the geographical centre of Tasmania. It is designed to be similar to a cairn erected by James Sprit on Mount La Perouse during his trigonometrical survey 1833-35.

Fly Fishing
While Bronte Park is a broad based "village" offering reasonably priced accommodation for anglers, kayakers, bushwalkers and people who just want to enjoy the area, there is an upmarket option at London Lakes which is a little over 10 km via the Lyell Highway and located on the shores of Lake Samuel. The website explains: "Comprising 4,200 acres of unique high country, this place is untamed private wilderness that combines luxury accommodation with unsurpassed trout fishing. Its exclusivity is emphasised by prolific native Tasmanian wildlife including Tassie devils, marsupial quolls, wombats, wallabies, the fascinating egg laying platypus and the intriguing echidna or spiny anteater. The bird life is unsurpassed and includes the endangered wedge-tailed eagle. In many ways, London Lakes is unforgettable. For thirty years, we have had Australia’s premier International standard fly fishing lodge. This has accommodated thousands of delighted guests, while providing the highest quality of Tasmanian gourmet food to fishers, wine travellers and wildlife enthusiasts.

Situated on the shores of Lake Samuel, the lodge is small and private, handcrafted from Tasmanian timbers and field stone and designed around a huge central stone fireplace to create a warm atmosphere. Check out http://www.londonlakes.com.au for more details. It is not cheap but it offers some of the finest fly fishing in the world.

* Prior to European settlement the area was inhabited by Lairmairrener First Nation people for an estimated 20,000 years.

* By 1832 there were no Lairmairrener people left in the area.

* In 1910 hydro construction began in the Central Highlands of Tasmania with the construction of the Waddamana (a Lairmairrener word meaning "noisy water" or "big river") hydro project.

* The town was created in 1947 specifically to provide accommodation for workers on the nearby Tungatinah (a Lairmairrener word meaning "a shower of rain" or "big river") Scheme and Nive River Scheme.

* By the 1950s the town had grown to over 700 workers. It had a police station, cinema, hospital and church. These were all subsequently removed.

* In 1978 the town was leased from Hydro Tasmania by Denis and Robin Wiss.

* In 1991 Hydro Tasmania sold the town to Denis and Robin Wiss who saw the potential in developing the remnants of the village into a popular fishing destination.

* The 19 remaining worker's cottages were renamed after the countries where the anglers for a local fishing competition hailed from. Today it is possible to stay in cottages named USA, Germany, Luxembourg, there are two Englands and two Norways, a Switzerland, a Wales, a Scotland, a Finland, and an Italy.

There is a good local website. Check out http://www.bronteparkvillage.com.au/ 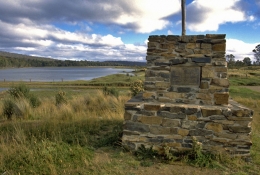 The trig marker near the centre of Tasmania, near Bronte Park (photo taken 1995) 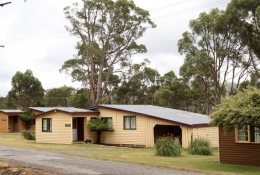 The West Germany, Wales and Scotland cottages at Bronte Park. 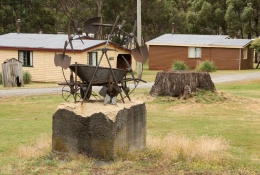 A monument to the workers employed on the hydro scheme made from the tools they used - a wheelbarrow, shovels, picks, hoes, sledge hammers and crowbars.