Boat marina and tiny settlement on the Hawkesbury River

Brooklyn, sometimes referred to as "the gateway to the Hawkesbury", is a small riverside settlement occupying the narrow strip of land between the river's southern bank and the extensive bushland of the Ku-Ring-Gai Chase National Park and Muogamarra Nature Reserve. Just offshore is Long Island, a nature reserve (untouched but for the train line which cuts across its western edge), and off Flat Rock Point, at Brooklyn's north-eastern tip, is Dangar Island which has a jetty, wharf, post office, general store, some roads and a reserve where there are Aboriginal rock carvings. Boating is Brooklyn's major attraction. There are houseboats, hire boats, ferries, water taxis, boat ramps and a number of marinas stretching along the shoreline from the Brooklyn Bridge.

This charming village on the shores of the Hawkesbury River is located 55 km from Sydney - and there is a catch to accessing it. You can drive directly on the old Pacific Highway (exit at Hornsby - it is 54 km) or you can drive past it on the Newcastle Freeway, cross the Hawkesbury, double back and get to Brooklyn on the old Pacific Highway heading south.

Although it sounds very British (or, perhaps, American) Brooklyn was reputedly named after Breuckelen, a town in the Netherlands just south of Amsterdam. There is an alternative explanation which suggests that it was named because the Union Bridge Company of Brooklyn, New York built the first railway bridge across the Hawkesbury. This is unlikely as the settlement was known as Brooklyn before the bridge was built.

The Historic Plaques and History Poles
Along the foreshore to the east of the Hawkesbury River Marina are a series of plaques and poles with photographs and stories relating to the history of the area. They are genuinely fascinating. Did you know, for example, that "Former Queensland Premier, Sir Samuel Griffiths, co-author of the Australian Constitution ... drafted the document while cruising the Hawkesbury River aboard the Lucinda in March, 1891." or that "On 21 June, 1887, celebrations for Queen Victoria's birthday saw multitudes of Sydneysiders travel by train to the newly opened Hawkesbury River Railway Station at Brooklyn's harbour. Excitement turned to terror as an overloaded passenger train lost its brakes and hurtled down the steep descent on course with a tourist-packed train about to depart Hawkesbury River Station. Courageous railway pointsman, Patrick Proctor, risked his life to hold down the points level and thereby diverted the wildly speeding and swaying train onto a branch line and past the waiting locomotive. Shooting harmlessly through the crowded station, the runaway train eventually collided with empty rail trucks on the Long Island causeway before leaping from the tracks and plunging into the Hawkesbury River. Six of the crew and passengers were killed and another forty were injured in what was Brooklyn's first railway disaster." Other plaques tell of the General Gordon, a paddle steamer rail ferry; of the 140 troops stationed on Long Island during World War I in World War I and the anti-aircraft battery built on Flat Rock Point during World War II; and of Governor Arthur Phillip's three expeditions up the Hawkesbury and past Brooklyn.

McKell Park and Flat Rock Point
Beyond the foreshore, and above the marina, is McKell Park at the north-eastern tip of the village. It is possible to walk up the steps to the park. On the southern side is a view down to Parsley Bay where there is a concrete boat ramp and car park. On the upper level are picnic, barbecue and playground facilities and, at the eastern end, a short walk to a modest lookout over the Hawkesbury and across to Dangar Island. It is  possible to walk down the steps beside the lookout. Below there are also picnic, barbecue and playground facilities.

Great North Walk
Brooklyn is on the route of the 250 km Great North Walk from Sydney to Newcastle, a moderately difficult walk which usually takes between 10-14 days (it has been done in under 60 hours) it includes a wide range of environments and attractions ranging from Aboriginal rock engravings to bridges, waterways, coal mines and beautiful bushland. It was created in 1988 as a Bicentennial Project but includes tracks which had been used by Aborigines for thousands of years. It can be broken down into smaller sections. The section which includes Brooklyn is known as the Hawkesbury Track and runs from Berowra to Somersby. It is necessary to cross the Hawkesbury River at this point and the cheapest way is to catch the train from Brooklyn to Wondabyne. For more information check out http://www.thegreatnorthwalk.com/ and get a downloadable map from http://www.everytrail.com/guide/great-north-walk-australia-s-best-bushwalk. The Crown Lands website has details about the Brooklyn section of the walk. Check out http://www.lpma.nsw.gov.au/about_recreation/walking_tracks/great_north_walk/sections_of_the_great_north_walk.

Governor Phillip's Exploration of the Hawkesbury
The signage, celebrating the centenary of the Hornsby Shire, at Brooklyn explains the historic voyage in some detail and also provides a fascinating map made in June, 1789.
"Governor Arthur Phillip undertook the first European exploration of the land that later became Hornsby Shire. He led the expedition on 2 March 1788 barely a month after the settlement of Sydney was founded. Taking a longboat and a cutter he explored Broken Bay looking for arable land. After investigating Brisbane Water and Pittwater he headed up the Hawkesbury to what is now called Dangar Island which he reached on 7 March. After catching a number of mullet for their evening meal, he named the location Mullet Island. The explorers noted signs of habitation and in the evening three Aborigines were sighted. The following morning Governor Phillip's party briefly explored the nearby mouths of Mullet and Mooney Creeks before returning to Sydney. Phillip returned to Dangar Island on 11 June 1789. The following day his party continued up the Hawkesbury, camping overnight at a point believed to be Gentleman's Halt. They travelled as far as what is now known as a Wisemans Ferry covering the length of the Shire's northern boundary. Philip named the river the Hawkesbury in honour of Lord Hawkesbury, President of the Board of Trade. In July 1789 after returning to Sydney for provisions, Philip launched a third expedition which reached as far as Richmond Hill. On this expedition Captain John Hunter performed an extensive survey of the Hawkesbury River and Berowra Creek, charting the shorelines and sounding the waterways."

The Riverboat Postman
The wharf at Brooklyn is the point of departure for Australia's last riverboat mail and groceries delivery service up the Hawkesbury, a reminder of the days when the Hawkesbury was the means of connecting the farming communities inland to the settlement at Sydney which relied upon their supplies. It departs Monday to Friday at 10.00 am. (returning at 1.15 pm). It is now operated by Hawkesbury Cruises. The first Riverboat Postman started the run in 1910. Today this lazy trip up the Hawkesbury delivers mail and goods to the settlements of Dangar and Milson Islands, Kangaroo Point, Bar Point, Marlow Creek, Fisherman's Point and Milson's Passage before returning to Brooklyn. It is an unforgettable experience and a delightful way to experience the strangeness of the Hawkesbury and its residents. Check out http://riverboatpostman.com.au.

Dangar Island and the Ferry Service
Located only ten minutes from the Brooklyn Ferry Terminal, Dangar Island is a charming retreat in the Hawkesbury River. The Brooklyn Ferry Service departs from near the marina at regular intervals on a daily basis. It is also possible to charter the Banksia and cruise the area, tel: 0448 101 016. Check out http://brooklynferryservice.com.au/timetable for times.
Dangar Island was home to the Guringai Aborigines before the arrival of Europeans. In 1788, only months after arriving in Sydney Cove, Governor Phillip explored the area. He named the island Mullet because he noted large numbers of fish in the Hawkesbury River. The island was purchased by Henry Carey Dangar in 1864 and it was subsequently renamed. It is gloriously sleepy and the essence of Hawkesbury laziness and relaxation. There are no cars on the island and the only supplies are at the local general store. Visitors wanting to experience the island should download a map and brochure (see http://discoverhornsby.com/wp-content/uploads/2015/06/HSC01849-Self-Guided-Maps_Dangar-Island_FA.pdf). There are three walks - the Dangar Island Walk around the island which is 4.3 km and takes a little over two hours; the Riverview Loop which is 2.8 km and takes around 90 minutes; and the Bradley's Beach Loop which is an easy 1.7 km and takes around 45 minutes.
The brochure lists a total of 14 points of interest on the island which include the remnants of the Ladies' Baths; the historic water tower which dates from around 1880; the remains of Henry Dangar's house (1890); some heritage listed blackbutt trees; Bradley's Beach with its plaque to Governor Arthur Phillip and its migratory shorebirds; the swamp mahogany forest; Kiparra Park and the Aboriginal middens that are dotted around the island.

* Prior to the arrival of Europeans the southern shore of the Hawkesbury River was occupied by people from the Kuring-gai (Guringai) Aboriginal language group.

* Governor Phillip and party entered Broken Bay in a whaleboat in March 1788. They sailed past the mouth of Brisbane Water.  The party camped on Dangar Island, which Phillip named Mullet Island after some successful fishing.

* George Peat was the first European settler. He received a land grant of 50 acres in 1836 at what is now known as Peats Bight on the southern shore of the Hawkesbury. He hacked out a track from Pennant Hills to the river which was used as the basis for a road to the north in 1847. A punt forded the river from Peats Bight to present-day Mooney Mooney, hence the name Peats Ferry Bridge.

* The railway arrived in 1877, making Brooklyn less than an hour's journey from Hornsby. A ferry service then conveyed passengers to Gosford.

* Brooklyn came into existence in 1884 when the Fagan Brothers subdivided their 100 acre grant.

* America's Union Bridge Company built the first railway bridge across the Hawkesbury in 1889.

* Oyster farming became a major feature of the local economy and the Hawkesbury area today supplies 10 per cent of the state's oysters.

* By the early twentieth century the Hawkesbury had become a major destination of holiday-making Sydneysiders and Brooklyn soon became heavily reliant on the tourism industry.

The Dictionary of Sydney has a good overview of Brooklyn's history. Check out http://dictionaryofsydney.org/entry/brooklyn. There is an interesting walk around Brooklyn which can be read at https://www.travelwithjoanne.com/brooklyn. 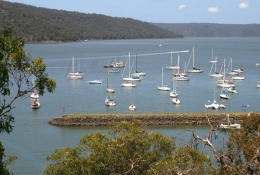 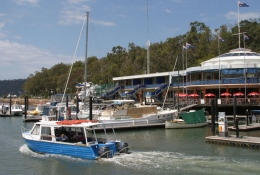 The Hawkesbury River Marina, the centre of Brooklyn. 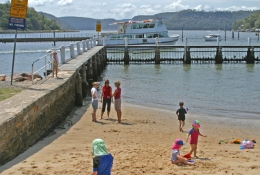 The swimming pool along from the Marina at Brooklyn. 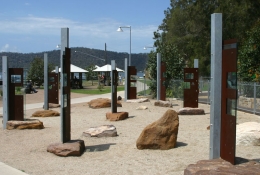 The history poles near the marina at Brooklyn 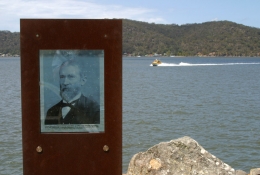 One of the many historic plaques which line the river at Brooklyn. 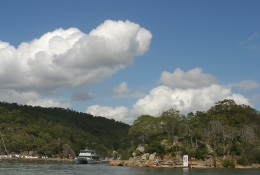 View from the deck of the Riverboat Postman as it leaves Brooklyn. 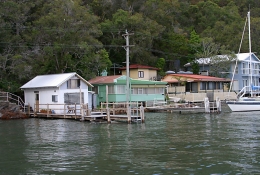 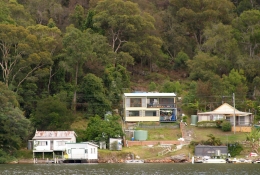 Isolated homes up the Hawkesbury - only accessible by boat.