Brookton is a typical small wheatbelt town bisected by the railway line. It sits at a point where the Great Southern Highway and Brookton Highway cross. In recent times, being only 135 km from Perth on a good road, it has attempted to attract Perth commuters. Interestingly the town and surrounding district have little to entice the visitor.

Brookton is located 135 km south-east of Perth via the Brookton Highway.

John Seabrook was the town's first settler. So when the Great Southern Railway arrived in 1884 the siding was named Seabrook Siding. It was subsequently decided that Seabrook couldn't be used because there was already a Seabrook near York. It was changed to Brookton which was the name of John Seabrook's house.

Brookton Museum and Heritage Centre
Housed in the town's Old Police Station, on the corner of Robinson Road and Grosser Street, the museum is now only open from by appointment. Contact (08) 9646 4117 or 0427 334 051. It contains a good collection of local memorabilia and extensive archives. On permanent display is the wagon that was traded for the land on which the Bedford Arms stands. There is a display of local geology specimens and amusing reminder of times past - Grandma’s Wash House.

Town Lookout
Signposted 2 km from Brookton on the road to Perth, this lookout offers excellent views over the town and the rich, productive surrounding agricultural countryside.

Boyagin Rock Nature Reserve
Boyagin Rock Nature Reserve, an imposing rocky outcrop which is typical of so much of the Western Australian wheatbelt, is located 10 km south of Brookton. It is surrounded by stands of powderbark, jarrah and marri and is home to numbats, echidnas and Tammar wallabies. Boyagin is one of the few areas of original fauna and flora left in the wheatbelt. The rock is home to the unusual resurrection plant, a tough little plant known as pin cushions which dries out in summer and appears to have died only to be 'resurrected' by the first rains of winter.

* Prior to the arrival of European settlers the district around Brookton was inhabited by the Noongar Aboriginal people. Of particular significance was Boyagin Rock.

* The first European into the area was John Seabrook in 1846.

* Between the 1840s and 1860s the area was regularly visited by itinerant saddlewood cutters.

* John Seabrook and his family were the only permanent Europeans in the area until his stepson, A. W. Robinson, took up adjacent land in 1864.

* By the 1860s and 1870s there were sheep and wheat farms in the area who were cutting sandalwood and clearing the white gums, York gums, jam and she-oak thickets and scrub and turning the land into grazing and wheat growing acreage.

* The Great Southern Railway arrived in 1884 with the establishment of the Seabrook Siding which was named after John Seabrook. A small community grew up around it.

* The Brookton Railway station was opened in June, 1889.

* The town was gazetted in 1895 and named Seabrook.

* The town's name was changed from Seabrook to Brookton in 1899 because there was another Seabrook near York.

* By 1903 the tiny settlement of Brookton comprised a school, hotel, bank and a few shops.

* Today the town is a typical wheatbelt service centre.

There is no Visitor Information Centre in town. The Old Railway Station has some information about the town.

The local Shire website has information about accommodation and eating in the town. Check out http://www.brookton.wa.gov.au/. 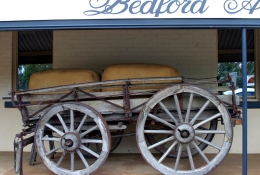 An old bullock wagon outside the Bedford Arms in Robinson Street. 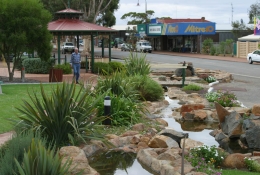 The park and water feature in the main street. 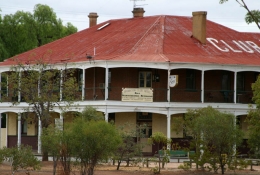