Some local wits joke that the Brooweena Historical Village and Museum is larger than the town. This is not correct but, like so many jokes, it has an element of truth. Brooweena is a tiny town which owes its existence to a sawmill and an impressive Historical Village. It is one of those towns which is easy to overlook because the main Maryborough-Biggenden Road bypasses the town's small centre.

Brooweena is located 268 km north-west of Brisbane via Gympie and 49 km west of Maryborough on the Maryborough-Biggenden Road.

When the local railway station started operation in 1889  it was named Teebar. That lasted for less than a year. In 1890 it was changed to Brooweena which, it is believed, meant either 'crayfish' or 'crab' in the language of the local Aborigines.

Brooweena Historical Village and Museum
Located in Smith Crescent, the Brooweena Historical Museum is open the second and fourth Sundays of each month from 10.00 am to 3.00 pm. Spreading across the road this huge museum has a collection of twelve heritage buildings and includes a dairy display, a blacksmith's shop, the original Shire Office, a post office, the former railway station and plenty of old farm equipment. There is also a a rustic barn with a collection of bullock and horse drawn vehicles and an original settler's slab dwelling with detached kitchen. Tel: (07) 4129 9262 or check out https://brooweenamuseum.wixsite.com/website-1?fbclid=IwAR3LXLDMyTXynp8hpqfjSPp9C01ldyXYGJ6wyK8H7KQImIYfA9a1eCax6Pw.

* Prior to the arrival of Europeans the district was home to people from the Gubbi Gubbi Aboriginal language group.

* The area around Brooweena was first settled in 1849. The two properties which covered the area around the present town were known as Teebar and Gigoomgan.

* The construction of a branch line from Mungar Junction to Monto Branch Line led to the creation of Brooweena. The railway station was opened in 1889 and called Teebar but the name was changed the following year to Brooweena.

* As early as 1892 there was a butcher's shop to supply the railway workers.

* Shortly afterwards the first residence, the stationmaster's cottage, was built.

* In 1904 the Brooweena Provisional School was opened.

* In 1909 the school was upgraded to a State School

* In 1915 the Woocoo shire office was built and the Shire of Woocoo was established.

* 1921 saw the construction of the town's War Memorial Bridge. It commemorates nine local men who died in World War I.

* The town's new Council Chambers were opened in 1962.

* The Woocoo Historical Society produced a book in 1988 called Pioneers and Progress: A History of Division One, Shire of Woocoo, Queensland.

There is no Visitor Information in Brooweena. The closest is the Fraser Coast Information Centre, Maryborough City Hall, 388-396 Kent Street, Maryborough, tel: 1800 811 728.

There is no dedicated website https://brooweenamuseum.wixsite.com/website-1?fbclid=IwAR3LXLDMyTXynp8hpqfjSPp9C01ldyXYGJ6wyK8H7KQImIYfA9a1eCax6Pw has useful information. 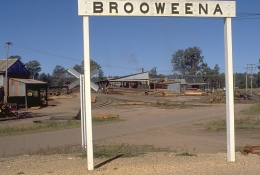 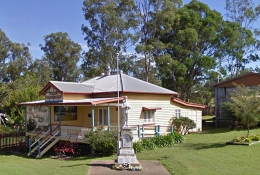 The town's WWI war memorial outside the Historical Village. 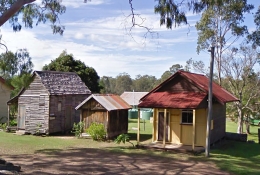 Two buildings inside the Historical Village. 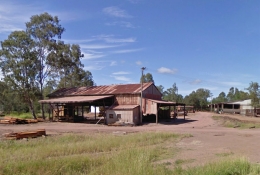 The town's sawmill near the Historical Village.