The locals probably wouldn't like to be described as a "southern suburb of Batemans Bay" but as more and more Canberrans head to the South Coast looking for either a holiday or a retirement home the thriving town/city of Batemans Bay keeps stretching its tentacles further north and south. Thus the sleepy settlement of Broulee, which came into existence as the first harbour in the Moruya area because there was a dangerous sand bar at the mouth of the Moruya River, has in recent times become a very desirable destination for people who want the advantages of Batemans Bay (big shopping centre, good restaurants and providores) but don't want to be part of the hustle and bustle.

Broulee is located 300 km south of Sydney via the Princes Highway. It is 26 km south of Batemans Bay via the attractive coastal George Bass Drive.

Broulee is a Yuin word of unknown meaning. It was given to the area by Thomas Florance, the Assistant Surveyor for the Surveyor General's Department who named Broulee Island, "Broulhee" in 1827.

Exploring Broulee Island
Broulee Island, which is a tombolo (a spit of sand) and a basalt and sandstone island which covers 43 hectares at the high water mark, was declared a nature reserve by the National Parks And Wildlife Service in 1972. Today there is a pleasant 4 km walk around the island through stands of mangroves, coastal banksias, casuarinas, coastal wattles, grey and ruby saltbush, westringias, boobiallas, yellow tea trees, swamp paperbarks, coastal rosemary, muttonwood trees, lilli pilli, red olive plum, silkpod vines and sickle fern. The island is also known for its excellent birdlife. The island also has evidence of an old hotel, a solitary grave and a jetty.

The walk begins south of Broulee's main beach. It is necessary to cross the permanent sandbar. Apart from its rich flora the island has beautiful rock pools, excellent lookouts from which, in May and October, whales can be sighted. There is a downloadable brochure which includes information about the walk. Check out http://www.eurobodalla.com.au/docs/long-walks-Oct-2010.pdf.

Broulee Island was popular with local Yuin people - there are middens on the island - and, in the 1830s it became a port (it was relatively sheltered) with a hotel and a jetty. At various times (1873, 1966, 1969, 1971, 1974, 1981, 1988) the tombolo has been breached by the sea isolating the island from the mainland. There is a very detailed history of the island at http://www.environment.nsw.gov.au/resources/nature/BrouleeIsNRpom.pdf

Broulee and Water Activities
The main appeal of Broulee, apart from walking around Broulee Island, is the variety of water activities offered to holidaymakers. This is an ideal area for surfers, windsurfers, scuba divers, anglers and swimmers. There is even a downloadable brochure on the beaches in the Eurobodalla Shire which includes information about access, the best beaches for surfing, patrolled beaches, best beaches for snorkelling and all the rock pools in the area. Check out http://www.eurobodalla.com.au/docs/Beaches%20January%202013.pdf

Broulee and Fishing
Burrewarra Point, Guerilla Bay and Jimmies Island are ideal for snapper, tuna, kingfish, luderick and flathead. North of Rosedale, Malua Bay and Pretty Point are known for bream and tailor. Mossy Point and Tomakin have ramps and catches can include bream, flathead, whiting, blue swimmer crabs and, in season, prawns near the mouth of the Tomakin River. Check out http://www.eurobodalla.com.au/fishing/ for charter boats as well as detailed information on the entire region.

Broulee and Surfing at Pink Rocks
Pink Rocks off the northern side of Broulee Island is regarded as one of the best surfing locations on the Eurobodalla Coast. When the waves are rolling it is strictly for experts. Six metre waves and a dangerous break are not for beginners. Surf Beach and McKenzie's Beach around Malua Bay are also popular. More gentle swells lie to the north of Broulee on the beaches from Mossy Point to Tomakin near the mouth of the Tomago River. There are four surf schools in the area. For more information check out http://www.eurobodalla.com.au/surfing

Broulee and Scuba Diving
There are a range of excellent diving sites between Batemans Bay and Broulee. For specific information check out http://www.eurobodalla.com.au/diving-snorkelling/ which describes in details sites at Sunshine Cove, McKenzies Beach, Guerilla Bay, Tomakin Cove and  Broulee Island.

* It has been estimated that the Bugelli-Manji group of the Yuin Aboriginal language group were living around Broulee for thousands of years before European settlement. They lived mainly on fish and crustaceans and kept warm in the winter months with possum skin coats.

* The first Europeans to pass through the area were the survivors from the wreck of the Sydney Cove who reached the area on 16 April 1797.  Only three reached Sydney alive.

* The area was surveyed in 1828 by Thomas Florance who named the district Broulee.

* By the late 1820s pastoralists had moved into the area and by 1836 the bay on the north side of Broulee Island was being used to "load and unload goods, stock and people from anchored ships using small boats." It was considered safer than the mouth of the Moruya River where a dangerous sand bar caused difficulties for smaller ships and prevented access by larger ones. It was around this time that John Hawdon wrote to the Governor asking that Broulee be surveyed so he could build a store and jetty so he could ship produce to Sydney.

* In 1837 the Surveyor-General advised the Colonial Secretary: "Browlee, which may be called East and West Browlee, being divided in two parts by a narrow neck of sand subject to be overflowed by very high tides, appears not to possess any favourable features for the formation of a town. The harbour is too open and the space for laying out streets is limited ... the place seems too unimportant for any considerable expenditure on the erection of public buildings and without them a town would never be formed."

* Broulee was surveyed (it included eight streets and 55 blocks on Broulee Island) and gazetted in 1837. Land sales commenced in 1840 with speculators like John Hughes and John Hosking purchasing 1170 acres at the north end of Broulee. They did not attempt to settle in the district and by 1841 they had both gone bankrupt.

* In 1839 a Police Station was established at Broulee and that same year Broulee became the site of the first court in the Moruya district. At the time there were about 100 convicts under police jurisdiction working on farms in the hinterland.

* In 1840 a post office was opened. Mail arrived once a week from Braidwood.

* By 1841 Broulee port was being used by whaling and coastal sailing vessels with as many as six vessels anchored offshore and one local writing "Broulee is becoming daily of greater importance; scarcely a day passes with the arrival or departure of some vessel."

* In 1841, the schooner Rover, went aground near Candlagan Creek and the crew members were rescued by a group of Yuin people who formed a human chain through the surf. A report in the Sydney Gazette noted: "As the men dropped from her [the Rover] their only chance was to get washed in by the surf within reach of the blacks, who were doing their utmost to save as many as possible, for which they merit great praise". In appreciation Captain William Oldrey presented every member of the tribe with a commemorative brass plate featuring an etching of the ship and an Aboriginal figure. This is recounted in great detail at http://www.nma.gov.au/audio/transcripts/indig_part/NMA_mission_station_20091109.html

* It was also in 1841 that Captain William Oldrey built the district's first hotel on the northern end of Broulee Island. It was named Erin-Go-Bragh (Ireland Forever) and is recognised as the first settlement and first hotel on the far South Coast.

* In 1851 gold was discovered at Araluen and on smaller creeks between Araluen and Moruya. A new and improved road to Araluen saw Moruya functioning as the region's service centre and the population of Broulee dropped back to a single individual.

* In 1859 the court, which had been moved from Broulee to Glenduart in 1852, was relocated to Moruya. The Erin-Go-Bragh Hotel was also shifted from Broulee Island to Campbell St, Moruya by Abraham Emmott who opened it as the 'Beehive' store.

* In 1873 the vegetation on the tombolo between Broulee Island and the mainland was removed to widen the track to the island but, after a particularly violent storm, the sea broke through and the island became ... an island!

* By 1892 Broulee had effectively been abandoned.

* In the 1920s shell grit was mined on the northern side of Broulee Island and shipped to Sydney for use in cement production.

* By 1926 people were starting to buy surveyed blocks of land (they had been surveyed in 1837) in the town and were building holiday shacks.

* In 1964 all the land on Broulee Island was resumed by the Eurobodalla Shire Council.

* The roads on Broulee Island were never built and in 1972 it was declared a Nature Reserve.

* Since the 1920s Broulee has been popular with holidaymakers from Canberra. They drove in on private tracks, drew fresh water from springs and set up shacks. Today it has become a weekend resort and retirement destination.

There is an excellent and very detailed history of Moruya and Broulee at http://mdhs.org.au/history.html. 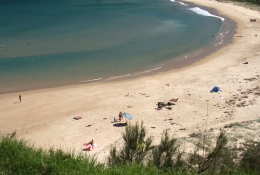 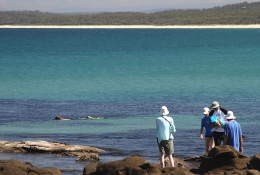 Snorkelling and mooching around the rocks at South Broulee Beach. 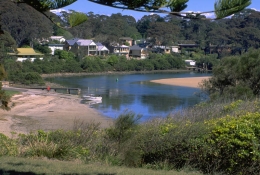 The boat ramp at the Tomago River just north of Broulee. 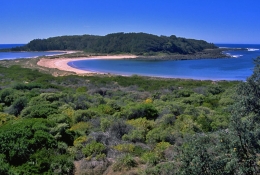