Bruce Rock is a small wheatbelt service town with the surrounding countryside being used primarily for wheat growing and sheep grazing. The town's attractions include a tiny bank at Shackleton and the impressive Kokerbin Rock - the third largest monolith in the country and surely the equal to the famous Wave Rock at Hyden.

Bruce Rock is located 241 km east of Perth via York and Quairading.

At Bruce Rock there is a sign which reads: "This marks the camp site of John Rufus Bruce after whom Bruce Rock was named." The town got its name from a low granite outcrop which lies to the east of the town and which was named after a sandalwood cutter, John Rufus Bruce, who set up his camp near a soak at the base of the rock.

Centenary Mosaic Pathway
There are more than 300 mosaic tiles on the pathway which was created in 2013 to celebrate the centenary of the official gazetting of the town. Look carefully and you will note that the mosaic tiles record local farms, buildings, churches, sporting groups, shops and families. The local Community Resource Centre has a booklet which provides details of the mosaics.

Two Museums - Bruce Rock Museum and the Machinery Museum
Bruce Rock Museum
Located in the main street, the Bruce Rock Museum has displays of both domestic and agricultural memorabilia. Behind the museum two interesting old buildings - a tiny one room schoolhouse complete with school desks and blackboard and a typical wheatbelt settlers cottage with its tiny rooms and low ceiling in which are housed a four feet wide double bed and a two feet wide single bed - have been reconstructed complete with the original furnishings. They have been cleverly recreated with the school being moved to the site and the settlers cottage being built out of mudbricks and whitewashed canvas. It is open from 2.00 pm - 4.00 pm daily. Check out https://www.brucerock.wa.gov.au/visit/what-to-do-see/museum.aspx for more information.

Machinery and Motor Museum
The Machinery and Motor Museum is a display of agricultural equipment including a particularly well preserved old car, a steam traction engine and a collection of vintage working farm machinery. It is open from 2.00 pm - 4.00 pm daily. Check out https://www.brucerock.wa.gov.au/visit/what-to-do-see/museum.aspx for more information.

Shackleton
Located 32 km from Bruce Rock on the Quairading Road, the long closed bank at Shackleton claims to be Australia's smallest bank. Measuring only 3 metres by 4 metres it used to be open on Fridays from 3.00 pm - 4.30 pm until it finally closed up in 1997.

Ardath Hotel
Located on the main street in Ardath, 21 km south of Bruce Rock, the Ardath Hotel dates from 1925. It is a typical Heritage style hotel where the main bar has original  furniture and there is an historic dining room. It was featured in a 2018 television commercial for Swan Draught beer.

Kokerbin Rock
Kokerbin Rock (sometimes known as Kokerbin Hill), located 49 km west of the town via the charming hamlet of Kwolyin (the pub is really the only building in the hamlet and has Chinese characters under the pub's name - presumably Kwolyin in Chinese), is a large granite outcrop - it covers 9 ha and is 122 metres high - which immediately strikes the visitor with its size and grandeur. It is said that Kokerbin meant 'high or lofty place' in the language of the local Aborigines. It is reputedly the third largest monolith - after Uluru and Mount Augustus - on the continent and includes caves, a deep well and a formation known as the Devil's Marbles. The Rock is situated within the Kokerbin Nature Reserve and has a picnic area and walk trails which can be accessed via the picnic area or the Well site. The walk passes the Devil's Marbles  and offers panoramic views from the top of the granite outcrop. For more information check out https://parks.dpaw.wa.gov.au/park/kokerbin.

* Prior to the arrival of Europeans the area was home to people from the Nyaki Nyaki Noongar First Nation people.

* By 1860 settlers were being allocated land around Bruce Rock.

* Around 1879 a sandalwood cutter named John Rufus Bruce settled in the area.

* Like most of the wheatbelt it was not settled until after 1900.

* Land was released for agriculture in 1908.

* In 1913 the Quairading to Bruce Rock railway line was opened. That year saw the district constituted as the East Avon Road District. Bruce Rock was officially gazetted in 1913.

* The Shire Council offices were built in 1929.

* By 1932 the town had two grain elevators operating at the railway station.

The Shire of Bruce Rock has a useful website. Check out https://www.brucerock.wa.gov.au. 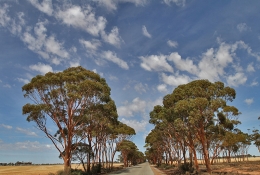 The roads around Bruce Rock are edged by stands of eucalypts 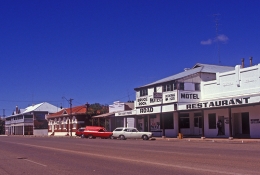 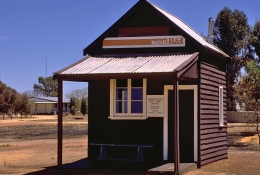 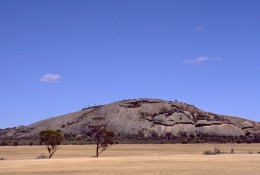 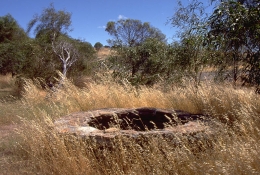