Bruce, which is nothing more than a railway station and a few outbuildings, is a fascinating study of how a town can be planned but if people decide not to settle it will die. The problem, as with all this area of the Flinders Ranges, is that rainfall is low and droughts are common. When first settled it looked as though the area would be productive and prosperous. Today it is nothing more than an historic curio. A town without people.

Bruce is located 340 km north of Adelaide via the Princes Highway. It is 64 km from Port Augusta via Quorn and is 293 metres above sea level.

No it is not a Monty Python joke. Nor was it named after Prime Minister Stanley Bruce. It was actually named after a well-known local farmer although an alternative view claims it was named after a friend of Sir William Jervois, Governor of South Australia (1875-1883).

Bruce Railway Station
The Bruce Railway Station, although not open for inspection, has a fascinating history. It was built in the 1870s in anticipation that the town of Bruce would prosper and be a major centre in the Flinders Ranges. This did not happen. The station went into decline and was in ruins in 1986 when Tony Gwynn Jones and his wife purchased it planning to turn it into a rather exotic bed and breakfast destination. They did major repairs and renovations throughout 1993 and opened for business in March 1994. They operated it for a decade and then sold. The next owners continued the bed and breakfast but it was sold again and it is now privately owned and not open to the public.

* Prior to European settlement the Nukunu Aborigines had lived in the Flinders Ranges area for tens of thousands of years.

* The first European settlers arrived in the 1850s. The area was broken up into land administration divisions and the County of Frome in which Bruce is situated was proclaimed in 1851.

* The Willochra Plain was opened up for closer settlement in the 1860s. Each settler, in many cases from Britain and from Germany, was allocated 640 acres of land. They had to put a home on the land within two years. The Hundred of Willochra, a land administration division, was proclaimed in 1875.

* In 1864-66 there was a severe drought which was followed by further droughts in the 1880s and 1890s. These droughts effectively decimated the agriculture in the area.

* In November 1865 the South Australian surveyor-general, George Goyder, who had been largely responsible for eulogising the pastoral potential of this borderline desert land, drew 'the line of demarcation between that portion of the country where the rainfall has extended, and that where the drought prevailed' on a map. It became known as Goyder's Line. To the north of the line lay unusable desert. In the case of Bruce the desert started far to the south of the dry settlement.

* In 1876 the town of Bruce was officially laid out. It was believed that Bruce would become  the largest town on the plain but during the 1860s-1870s 500-600 men who were working on the railways were living in Quorn.

* By 1877 Bruce was a railway station on the line from Peterborough to Quorn. Quorn was the southernmost point of the original Ghan train which made its way via Oodnadatta to Alice Springs.

* Bruce was also on the railway line from Sydney to Perth. A passenger would travel from Sydney to Broken Hill, then to Peterborough, through Bruce and on to Quorn. From Quorn they would travel down the Pitchi Richi Pass to Port Augusta and across the Nullarbor.

* The railway finally closed down in 1972. The last scheduled service was a goods passenger train and that was probably a wheat train.

* In 1973 the Pitchi Ritchi Railway Society was formed. It was originally formed to save the beautiful bridges and dry retaining walls down the Pitchi Richi Pass.

There is no accommodation at Bruce.

There is no eating at Bruce.

There is no website for Bruce. The nearest and most useful for the region is http://www.flindersranges.com 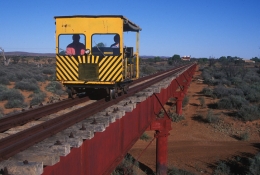 Tony Gwynn Jones driving an old piece of railway stock with the Bruce Station in the background. 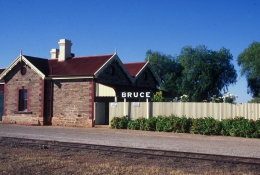