Small rural service centre on the edge of the Snowy Mountains

Bruthen is a rural village situated 25 kilometres north-east of Bairnsdale in the valley of the Tambo River. It is a small service centre with an historic general store (1860) and post office (1890). The centre of town, a broad shady garden with a rotunda, is ideal for picnics.  There are attractive bushwalks and the East Gippsland Rail Trail is popular with walkers and cyclists. The highlight of the area is the Fairy Dell Scenic Reserve with its easy and pleasant walk through the temperate rainforest.

Bruthen is located 306 km east of Melbourne and 25 km north-east of Bairnsdale.

'Bruthen', or 'Brewathen' as it was originally called, is possibly a Kurnai Aboriginal word meaning 'bracken', 'long wooden point' or 'place of an evil spirit'.

Historic Bruthen
There are not a lot of historic buildings in Bruthen but the ones of interest include St Matthews Church (1890), the General Store (1860) in the main street and the Post Office (1890), a Fettler's Hut and Police Lock-up as well as a monument to the explorer Angus McMillan outside the Visitor Information Centre. There are a number of old shops in the main street.

Remnant of the RAAF Avon-Sabre Jet
Over the road from the Visitor Centre, at the end of the median strip, is a remnant of the RAAF Avon-Sabre jet which crashed on the outskirts of Bruthen on 27 November, 1958. The plaque reads: "Flt Lt Ralph Oborn (DFC, ADFC) was on a flight from NSW to Sale when his jet engine "flamed out" at 40,000 feet. Oborn managed to avoid crashing in the built up area of the town before ejecting at 500 feet. He was the first pilot to eject safely from an aeroplane in Australia. He received only minor injuries. It was the first time he had used a parachute."

Former Fettlers Hut and Police Lock-up
Located behind the Information Centre at the beginning of the Bridge to Bridge Walk are two historic buildings. The larger building is a former fettler’s hut which was donated by the rail trail committee of management to the people of Bruthen. It had been located at Mossiface (a former railway station to the west) and was moved to Bruthen in 2016, restored by local volunteers, and is now the Railway’s History Museum. The building was originally a "transportable" used by railway workers (known as fettlers).
The smaller building is the original "lock up" which was moved from the Police Horse Paddock (behind the Police Station) and also restored. Together they form a significant visual link with the past, and now include information about former times.

Bullant Brewery
Located at 46 Main Street, this is a delightful, modern brewery where visitors can stop for a meal and a drink. They sell six beers - Bark Sheds Wheat Beer, Tambo River Pilsner, Double Bridges India Pale Ale, Mossiface Pale Ale, Pig & Whistle Brown Ale and Piano Bridge Stout. Their stated aim is "to pair the best onsite brewed beer with the best regionally sourced food." Visitors can view the brewhouse and eat and drink on the veranda which overlooks the valley. For more information check out http://bullantbrewery.com/ or tel: (03) 5157 5307. It is open Wednesday, Thursday, Sunday 11.00 am - 5.00 pm and Friday and Saturday 11.00 am - 10.00 pm.

Fairy Dell Scenic Reserve
Fairy Dell Scenic Reserve is 48 ha of rainforest in the hinterland.  It can be accessed by driving towards Bairnsdale on the Great Alpine Road and turning onto Deep Creek Road. It is not easy to locate. Sensibly get a map from the Visitor Centre. At the car park there are picnic and barbecue facilities and a delightful (and easy) half-hour walk along a designated track through the lilly pilly rainforest. The moss and lichen are so dense that children will feel as though they are entering a fairy dell.

Mossiface
Located 6 km south of Bruthen, via the Great Alpine Road to Bairnsdale, is Mossiface where there are remnants of old Hop Kilns and Maize Cribs. At one time Mossiface was the upper reach of the Tambo River for paddle boats from Lakes Entrance. A major flood caused the river to move across the valley so that now there is nothing more than a remnant backwater.

East Gippsland Rail Trail
The East Gippsland Rail Trail runs from Orbost via Nowa Nowa to Bairnsdale. It is 94 km and at various points is coarse gravel, fine gravel and sealed. It follows the route of the train line that used to run from Orbost to Bairnsdale. "The trail west of Bruthen wanders through farm land, passing by the ruins of some impressive wooden bridges. If you cycle east once you get to the other side of the valley it is all forest to Nowa Nowa and once again mostly forest after leaving Nowa Nowa to Orbost. Walkers can experience the rail by entering it at the western end of the town where it goes under the road via a big tunnel then heads to the old rail bridge." Check out https://www.railtrails.org.au/trail?view=trail&id=143 for details. There is a downloadable map at http://www.eastgippslandrailtrail.com.au/pdf/Rail%20Trail%20MAP%202009.pdf.

* Prior to the arrival of Europeans the area was occupied by the Kurnai Aboriginal people who had lived in the area for at least one hundred generations.

* The first Europeans arrived around Bruthen in the 1840s. They were using the valley as a route from the Monaro to the Gippsland Plains. In 1840 the explorer Angus McMillan passed through the area.

* By 1858 a hotel, store and blacksmith were established at Bruthen on the route to the Omeo goldfields.

* In 1859 the town was officially surveyed and laid out.

* By the 1860s settlers had moved into the Tambo River valley and wheat, oats and potatoes were being successfully grown.

* Around the 1860s steamers started coming up the Tambo to Bruthen where they collected produce from the local area. A wharf was built at Mossiface downstream from Bruthen.

* A bridge was constructed over the Tambo River at Bruthen in 1872. That same year a school was opened.

* In 1882 Bruthen became the administrative centre of Tambo Shire.

* In 1915 the area stopped producing hops and maize took over as the main crop.

* In 1916 a regular rail service to Bairnsdale and Orbost was established.

* By the 1930s the river had silted up and steamer traffic stopped.

* In 1935 the rail passenger services ceased.

* In 1958 an RAAF Avon-Sabre fighter jet crashed near Bruthen.

There is a detailed historic website - http://web.archive.org/web/20040511081236/www.arts.monash.edu.au/ncas/multimedia/gazetteer/list/bruthen.html - with information and history about the town. 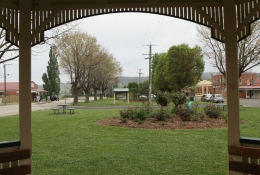 The broad grassed median strip down the main street from the band rotunda. 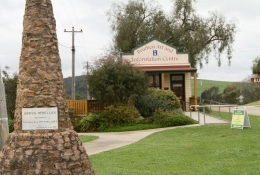 The Angus McMillan monument outside the Bruthen Art and Information Centre. 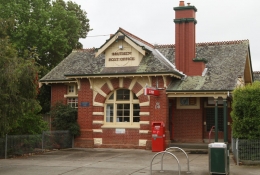 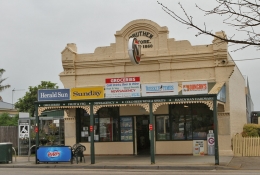 The Bruthen General Store (1860) in the main street. 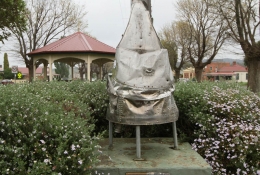 The remnant of the RAAF Avon-Sabre jet which crashed on the outskirts of Bruthen on 27 November, 1958. 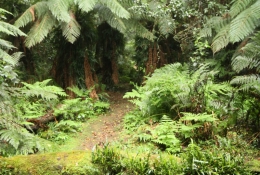 The path to the Fairy Dell. 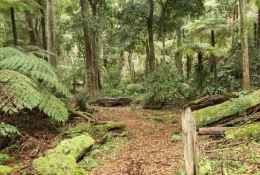 The Fairy Dell in the rainforest.