Buchan's main attractions are the Buchan Caves, Buchan Caves Reserve, numerous waterfalls, gorges and historic bridges. Buchan is the meeting point of the Snowy and Buchan Rivers. The town has galleries, eateries, the Howitt Bicycle Trail, tourist drives and self-guided historical walking tours. The surrounding valleys and hills provide opportunities for fishing, bushwalking, bird watching, trail riding, kayaking, white water rafting, four wheel driving and horse riding. Whilst Buchan is best known for its underground caves its history as one of the oldest townships in Victoria goes back much further than the discovery of the caves. It also has fossils that depict the mega fauna that existed in the region 20,000 years ago. Today the town is sustained by the Buchan Caves of which both the Fairy Cave and the Royal Cave are open for guided inspection.

Buchan is located 355 km east of Melbourne via the Princes Highway and the Bruthen-Buchan Road.

There is considerable uncertainty about the origin of the town's name. It has been argued that the word is a corruption of a local Kurnai Aboriginal expression "buchan buchan" meaning "smoke signal expert" or "bukkan munjie", meaning "the place of the grass bag". Equally some sources claim that George Robinson, the Protector of Aborigines, called the local area and the Aborigines "buckin" meaning "a mass of rocks with holes in it".

Buchan Caves
Buchan Caves Visitor Centre
The Buchan Caves Reserve, which was listed on the National Estate in 2000, covers 260 ha, has a delightful picnic area, a campground, adequate facilities for groups, and a Visitor Centre which has displays that help the visitor to understand the geological processes which have led to the creation of the caves. The calcium carbonate which forms the basis of the limestone formations in the area's 350 caves was produced by the skeletons of shellfish and coral which were deposited when the ocean covered this area of East Gippsland. The subterranean chambers and passages were carved by rainwater that trickles into the caves, forming stalactites and stalagmites which sometimes meet to form impressive pillars and waterfall-like structures. Red and brown colorations are caused by the presence of iron oxide while green is caused by copper. The caves are lit by electricity and have concrete steps and hand rails. There is natural ventilation and the temperature remains a steady 15° C. The sediments at the base of the caves have been dated to 700,000 years ago. The single greatest problem with both the guided caves - the Fairy and the Royal - is that many of the paths are narrow and low which means that tall people have to be very careful not to bump their heads and older people have some difficulty getting through the passageways. There are two caves open for guided inspection. The guided tours are coordinated so it is easy to view the Fairy Cave and then walk across and inspect the Royal Cave. It is particularly enjoyable to walk around the hillside where it is common to see mobs of kangaroos. For details of times of guided tours and information about camping and accommodation check out http://parkweb.vic.gov.au/explore/parks/buchan-at-cave-reserve.

Fairy Cave
Fairy Cave, which is 500 metres long, has 205 steps and five main chambers. Its main features include the King's Chamber, the Blackwood Chamber, the Crystal Altar, some particularly impressive shawls and the Ivory Palace. The cave was first opened for inspection in 1907. The bones of kangaroos and a megafauna wombat the size of a horse have been found on the cave floor.

Royal Cave
The Royal Cave, which is approximately 500 metres long, was opened for inspection in November, 1913. It has 145 steps, five main chambers, and takes around 45 minutes to inspect. Inspections start at one end and depart at another exit. Visitors pass through the Octopus Chamber, the Bridal Chamber, the Reed Chamber, the Princess Royal Chamber and the Skeleton Chamber where formations include the Font of the Gods and the Crystal Portal. There is an useful Parks Victoria brochure available for download at http://parkweb.vic.gov.au/__data/assets/pdf_file/0007/313594/Park-note-Buchan-Caves-Reserve.pdf. There is also an excellent book The Buchan Caves, East Gippsland, Victoria which is available for sale at the Information Centre.

Buchan Caves Reserve
The Buchan Caves Reserve runs up the valley from the information centre and has extensive picnic spots, a camping ground, a 1 km walking track and a variety of flora and fauna. It is common to see kangaroos and there are also koalas and over forty species of birds including brightly coloured parrots.

Buchan Caves Walks
Buchan Caves Reserve has a number of walking tracks ranging from short easy walks to longer and more demanding walks. The more popular include:
Spring Creek Walk (1.5 hrs, 3 km return) which splits into the higher Tea Tree Track and the lower Kanooka Track with both meeting at the Spring Creek Falls. The Tea Tree Track has some steep areas and along the track the rock type changes from Buchan Caves Limestone to the older Snowy River Volcanics. At the end of the track there is a viewing platform over the falls. The lower Kanooka Track criss-crosses the creek and passes through remnants of rainforest with mossy rocks and ferns. Fauna in the area includes Lyrebirds, Gippsland Water Dragons, Kookaburras, King Parrots and other wildlife.
Moon Hill Walk (30 minutes, 500 metres return) - A short walk which leads to a vantage point overlooking the reserve.
Caves Reserve Track (2 hrs, 4 km return) - a walk that starts opposite the children’s playground and moves along a ridge to the north western corner of the reserve before meeting up with the Spring Creek Walking Track and the Granite Pools Walking Track.
Granite Pools Walk (2.5 hrs, 4 km return) - a steep walk which makes its way through some tall timber and moss-covered gullies. It has excellent views of the Buchan Valley.
Check out the downloadable PDF at http://parkweb.vic.gov.au/__data/assets/pdf_file/0009/313596/Park-note-Buchan-Caves-Walks.pdf for more details and a good, detailed map.

Other Caves in the District
Other cave areas not open to the public are the Cloggs Cave Area, 4 km south-east of Buchan, and the New Guinea Area, 20 km north-east of the town, on the banks of the Snowy River. Apart from their scenic value, these sites have provided important information about Aboriginal occupation, including hearths, middens, rock paintings, burnt bones, and tools such as pebbles for burnishing skins, scrapers, blades, pebble choppers and awls for piercing holes in skins for the manufacture of skin cloaks which date from 17,000 years ago. The remains of extinct species, including a megafauna kangaroo, a Tasmanian Wolf and a Tasmanian Devil now extinct in the area, have also been uncovered.

Murrindal
The road north from Buchan overlooks the Buchan and Murrindal Valleys and heads to Murrindal, the home of the Shades of Death Cave which was discovered by Europeans in 1900, explored in 1905 and opened to the public in 1984. It has since been closed. It is on private property and is only used by serious cavers who seek permission to explore the cave. It is said to be the longest cave in Victoria (4 km from the entry) but this has not been verified. The area is mentioned in an Aboriginal legend which tells of a man who wandered into a cave and met Nyols, tiny people rarely seen by mortals. There is more information at http://under-victoria.com/?page_id=82.

The Bataluk Cultural Trail - Buchan Caves
The Bataluk Cultural Trail runs from Sale in the east through Bairnsdale, Metung, Lake Tyers, Buchan and Orbost to Cape Conran in the west. It follows the trails and trading routes of the local Aborigines and focuses on elements of Kurnai history and culture, including Dreamtime stories, traditional lifestyles, the Den of Nargun, Legend Rock, Aboriginal Keeping Places, archaeological sites such as canoe trees and shell middens, cultural centres of the region, and aspects of European invasion, colonial settlement and present-day existence. The Bataluk Cultural Trail website (http://www.batalukculturaltrail.com.au/buchan_caves.php) explains: "Archaeology has shown that Aboriginal people have lived in the Buchan region for around 18,000 years. A nearby cave contains artefacts and evidence of Aboriginal occupation of 18,000 years ago, making it one of the oldest Ice Age (23-10,000) cave sites in south east Australia. Repeated or long-term camping activities were undertaken throughout the Buchan region. The Snowy River valley is rich in archaeology sites. The most common type of sites recorded so far are surface scatter of stone artefacts. Some of these sites are rather large, containing up to 1,000 artefacts over hundreds of square meters ... Traditionally Gunaikurnai people did not venture deep into the limestone caves at Buchan. There were, however, many stories about the wicked and mischievous Nyols which lived in the caves below the earth. Tribal memories of that time may be detected in the story which concerns a group of children who inhabited this area when there was known to be a land south of Gippsland where there is now sea (ie Tasmania).  When playing they found a sacred object which they took home and, against traditional law, showed to the women.  Immediately the earth crumbled away and it was all water and many people were drowned." It is also worth noting that this area was the first successful Aboriginal Land Rights claim in Australia.

* There has been evidence found that some 20,000 years ago the area was home to both Aborigines and megafauna.

* Prior to European settlement the Buchan Valley was occupied by the Krauatungalung group of the Kurnai Aborigines.

* The first European explorer was Edward Bayliss who arrived in the area in 1838.

* In 1839 Bayliss settled in the area with "715 head of cattle, two drays and eight men". A man named John Rhodes Wilkinson occupied the Buchan Run.

* In the 1860s marble was quarried to build the Murrendale Park homestead.

* The township of Buchan was proclaimed in 1873. The Aboriginal name had been changed to Buchan which was the name of a town in Scotland.

* By the 1880s there were some small goldmines operating in the area.

* The town's first policeman was appointed in 1883.

* By the early 1900s black marble was being mined in the district. Some was used for the Shrine of Remembrance in Melbourne and Australia House in London.

* Prior to World War I wattle bark was collected in the area.

* A detailed survey of the district was carried out in 1899 or 1900. The land was reserved by the State Government.

* In 1899 a butter factory was established in the area.

* The Buchan Caves Reserve was gazetted in 1901.

* In 1907 Francis Herbert Arthur Moon descended by rope into what is now known as The Fairy Cave. It was opened to the public later that year.

* In 1928 a campground was constructed at the caves.

* In 1929 an exit tunnel was constructed in the Royal Cave.

* In 1938 tennis courts, the stone archway, a kitchen and toilet block were established at the Caves.

* After World War II a number of timber mills opened in the area.

* In the early 1970s main electricity was connected to the caves.

There is no visitor information in Buchan. The closest is Orbost Visitor Information Centre, Slab Hut, Nicholson Street, Orbost, tel: (03) 5154 2424.

There is a useful local website. Check out http://buchan.vic.au. 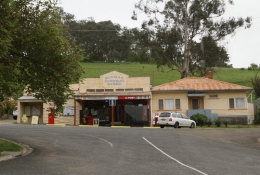 The main street of Buchan. 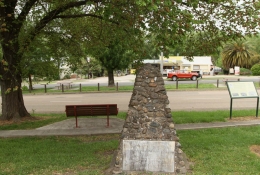 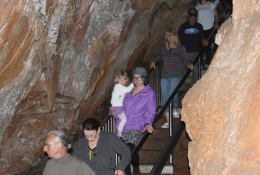 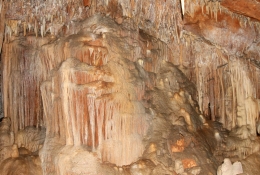 Impressive formations in the Fairy Cave. 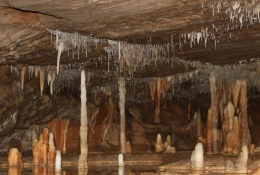 The Font of the Gods in the Royal Cave. 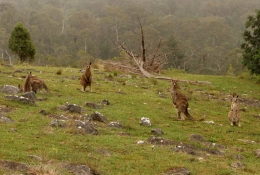 Kangaroos on the path between the Fairy and Royal Caves. 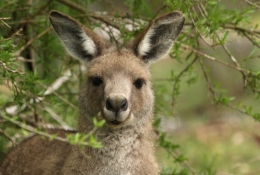 A kangaroo on the hill above the Fairy Cave.