Buckland is a tiny village of Buckland on the Tasman Highway between Hobart and Orford which is known for its charming St John the Baptist Church and its mysterious East Window; the unique colonial accommodation offered in the historic Brockley Estate; and the excellent Tasmanian Bush Garden with its rich displays of indigenous East Coast flora.

Buckland is located 62 km north east of Hobart on the Tasman Highway.

The settlement was originally known as Prosser Plains but in 1846 Governor Franklin renamed it Buckland after William Buckland, Dean of Westminster (1845-56) who had been appointed Professor of Mineralogy at Oxford University in 1813 and, as a clergyman, had tried to reconcile geology with the Bible.

It has been claimed that the church's impressive East Window dates from the fourteenth century. Some authorities have claimed that the window was originally designed for Battle Abbey in England, a church which dates from 1094. The story is that before the famous Battle of Hastings, which was actually fought at Battle in Sussex, William the Conqueror vowed that if he won he would build an abbey to commemorate his victory. Legend has it that he built the Abbey where the English King Harold II had fallen. The church was pulled down during the Reformation and it is possible that the window may have found its way out to Australia.

The problem is that some "experts" believe the window was created sometime in the fourteenth century (some 300 years after the Battle of Hastings).

The mystery of the window probably started because it was claimed that the Reverend F. H. Cox, who was Rector of the church from 1846-48, brought it to Australia when he emigrated from Sussex. One account even has Lord Robert Cecil, the British Secretary of State for the Colonies, giving the window to Cox before he departed from England. Whatever the story it is remarkable how the window has become mythologised.

There is a lengthy, and at time amusing, account of the whole saga of the stained glass windows at http://stainedglassaustralia.wordpress.com/2012/07/07/23-01-1850-st-john-the-baptist-buckland-tasmania/. The article disputes the romantic stories I have told above and claims, with some likely accuracy, that the window was actually made in London by an Irish-born artist, Michael O'Connor, who probably made the window in 1848. It is much more banal. The romantic stories are so much more interesting.

Read the article because it concludes with a detailed description of the elements of the stained glass window: "The windows of St John’s at Buckland are located in the chancel and comprise the main triple light east window depicting the life of St John and the crucifixion of Jesus and the two light window to the left of it with depictions of Matthew, Mark, Luke and John as their alter egos of the winged man (John), the winged lion (Mark), the eagle (John) and winged bull (Luke). The entire east window is made up of ten individual panels of varying sizes and shapes to form a lancet shape overall. Not counting the four smaller decorative panels in the upper area, the window is described as:

At the very top is a quatrefoil shaped window showing Christ on the Cross with the words “INRI”. (“Jesus of Nazareth, the King of the Jews.”)

Two quatrefoils below show, on the left, the text and depiction of “S Maria” (St Mary) holding her hands clasped facing heaven with the text “Dei Para” (“Prepare The”), the right with depiction and text “SATS IOHANNES” (St John).

The left light shows St John holding his staff with the shape of the cross at the top.

The centre light depicts the Paschal Lamb with Latin text “Agnus Dei” (Lamb of God) and the banner of St George (Victory cross of red on white). Below that is the Holly Dove and further down is the scene of St John baptising Jesus in the Jordan River. The Latin text below it is written “hic est Filius meus dilectus” (This is my beloved son).

The right light is probably considered the most controversial scene ever depicted in a stained glass window anywhere in Australia at the time. The gory graphical detail of St John’s beheading is unique. Herods’ daughter, Salome, had asked her father for the head of St John the Baptist which was duly obliged and so the scene in the window depicts Salome receiving St John’s head on the platter by a soldier and the body of St John lying below with his headless neck spurting blood. It’s probably not the most solemn or inspiring religious scene you would expect to see in the chancel of a church anywhere."

Brockley Estate
Built in 1841 and located a few kilometres east of Buckland at 160 Brockley Road, Brockley Estate is a spacious stone Colonial homestead situated on 10,000 private acres. The house is a unique example of its period. It is open to those members of the public who plan to stay the night. The homestead is furnished throughout with genuine antiques, many of them precious Tasmanian pieces. The convict built stage coach road, now disused and part of the property, runs from the front door of the house to Orford, eight kilometres away. There is lots of evidence on the property of the work of convicts with culverts and retaining walls both being built by convict gangs.

Tasmanian Bushland Garden
Located at 5598 Tasman Highway, open from dawn to dusk with free entry, the Tasmanian Bushland Garden specialises in the indigenous plants of eastern Tasmania. The organisers point out that their "display gardens feature hundreds of native plants arranged in natural communities plus rare and endangered plants, sandstone and granite floras, Tasmanian wattles and epacris species". There are a number of walking tracks with the Hill Top Loop Track taking about 30 minutes; the White Gum Loop taking 35 minutes and the connecting Wallaby and Wombat Track, which is steep and rough in places, taking about 50 minutes. For more information tel: (03) 6239 1688. Check out https://www.facebook.com/Tasmanian-Bushland-Garden-150192245846106.

* Prior to European settlement the area around Buckland was occupied by the Paredarerme Aborigines.

* When Europeans began to move into the district they called the area Prosser Plains. * The first settlers had reached the area by the 1820s and the oldest house, 'Woodsden', which lies north east of the town, dates from 1826.

* On 22 August, 1846 the foundation stone for St John the Baptist Church was laid by Fitzherbert Adams Marriott, the Arch Deacon of Hobart.

* In 1846 Governor Franklin renamed the settlement Buckland, after William Buckland, the Dean of Westminster (1845-56). Buckland was a clergyman and geologist who tried to reconcile geology with the Bible.

* Today Buckland is a tiny village on the road between Hobart and the East Coast.

There is no Visitor Information Centre in Buckland. The closest is the Swansea Visitor Centre, Noyes Street, Swansea, tel: (03) 6256 5072.

There is no website for Buckland although East Coast Tasmania tourism has a small amount of useful information at http://www.eastcoasttasmania.com/destinations/buckland. 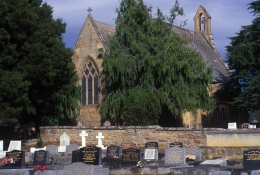 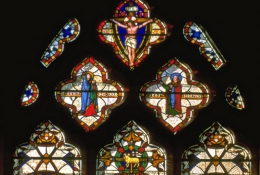 The upper section of the mysterious window in the Church of St John the Baptist, Buckland. 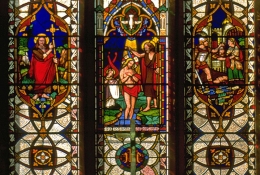 The lower section of the mysterious window in the Church of St John the Baptist church, Buckland.