There is the coast and there is the hinterland. Of all the hinterland towns on the Sunshine Coast, Buderim is one of the most charming. It is cool in summer when the coast bakes. Its luxuriant tropical gardens are alive with hibiscus, bougainvillea, poincianas and frangipani. The streets are tree-lined and there is a real sense that here is the Australian answer to an Indian hill station: an escape from the coastal heat and humidity. Such has been the success of this perception of Buderim that, in recent times, it has become one of the most expensive and sought after towns in the Sunshine Coast hinterland.

Buderim is located 95 km north of Brisbane via the Bruce Highway and 7 km due west, and up the hill, from Mooloolaba. The Buderim plateau ranges from 152 m up to 182 m above sea-level and is 7 km long and is 4 km at its widest.

The local Aborigines had a word, variously written down as  'Badderam',  'Budderum' and 'Buderim' which was used to describe the hairpin honeysuckle which is common in the mountains. The earliest settlers, who were timber cutters, heard the term and applied it to the mountain. Hence Buderim Mountain.

Pioneer Cottage
The Pioneer Cottage, built of pit-sawn cedar and beech around 1880 by J.K. Burnett one of the district's earliest settlers, is one of the few historical buildings left on the mountain. Surrounded by a glorious subtropical garden, this beautifully preserved and restored old house includes displays about the local area with rooms furnished in period decor. It is located in Balinger Crescent and is open Monday to Saturday from 11.00 am to 3.00 pm., tel: (07) 5450 1966.

Foote Sanctuary
The Foote family purchased 540 acres (220 ha) at Buderim in 1907 and started growing pecans, bananas, citrus fruits and pineapples. Their son, Eric Foote, died in France in 1916, aged 25, during World War I. In memory of their brother, Arnold and Hubert Foote, gave 17 acres to the people of Buderim as a sanctuary. Today the sanctuary, an attractive area of rainforest with abundant birdlife, small waterfalls, 272 indigenous flora species and stands of eucalypts, has a total of six walking tracks ranging from the Botanic Track (20 minutes) to the Challenge Track (1 hour). There is a detailed website with maps of the walking paths. Check out https://sites.google.com/site/footesanctuary.

Buderim Forest Park and Edna Walling Memorial Garden
The Buderim Forest Park is the perfect way to explore the rainforest around the town. Located at the bottom of Quorn Close it offers three walking tracks - 20 minutes, 30 minutes and one hour -  through a rainforest of ferns and palms, beside the Serenity Falls and along well-maintained paths. The council website describes it as "a 45 hectare subtropical paradise of towering trees, cool streams, meandering tracks and waterfalls." The Edna Walling Memorial Garden is a memorial to one of Australia's greatest and most innovative garden designers. An excellent brochure can be downloaded at http://www.buderim.qld.au/BuderimForestPark.pdf

Buderim Ginger
The name Buderim is synonymous with the production of ginger. In fact the Buderim Ginger company claim to make "the world's finest ginger". But you will need to drive to Yandina (see Yandina) 23 km up the road, if you want to inspect the factory. Ginger growing arrived in the Buderim area shortly after World War I. It was a crop of minor importance until World War II stopped importation from China allowing the industry to expand to meet local demand. The Buderim Ginger Grower’s Co-operative Association Limited, located in Buderim, was established by five local farmers. In 1979 it was moved to a much bigger factory in Yandina. The result was dramatic. As the company reports on their website: "Throughout the 1990's, Buderim Ginger became globally recognised for producing the World's Finest Ginger. This has been achieved by investing in production facilities and meeting the needs of customers in overseas markets, from the UK to the USA and from Japan to New Zealand. In Fact Buderim Ginger exports to over 17 countries." The Ginger Factory at 50 Pioneer Road, Yandina is open from 9.00 am - 5.00 pm with free admission and parking. Check out http://www.gingerfactory.com.au/ for extra details.

Maroochy Bushland Botanic Garden
7.5 km south-west of Buderim off the Bruce Highway lies the remarkable Maroochy Bushland Botanic Garden. Set on 112 ha it not only has a spectacular array of ferns, palms and indigenous flora, but also is alive with native fauna and has a number of well maintained walking paths. Most impressive is the Maroochy Bushland Sculpture Garden which has a collection of sculptures in typical bushland settings. Check out http://www.friendsofmaroochybotanicgardens.org.au/sculpturegarden.htm for more information. Uniquely the sculpture garden was created when eight sculptors spent sixteen days creating their works from Queensland stone.

* Before the arrival of timber cutters the Buderim district was inhabited by the Kabi Kabi Aborigines. It is believed that their language included a word, sometimes spelt 'Badderam' and 'Budderum', which they used to describe the mountain.

* The first Europeans to explore Buderim were timbercutters looking for beech and cedar. In 1854 a man named Richard Jones explored the mountain looking for timber for Pettigrew's Mill. He was followed in 1862 by Tom Petrie, who spoke the local Aboriginal language and is probably responsible for the town's name. Petrie was the first European to extract timber.

* William Henry Guy first surveyed the district in 1869 and in 1870 settlers started purchasing and clearing the land. They planted crops of sugar cane, citrus fruits, bananas, beans and tomatoes.

* The district grew slowly but by 1875 there were nineteen children and that was enough to justify the establishment of a provisional school.

* The town seemed to come of age in 1876 when a sugar mill was built and John Burnett built the Pioneer Cottage, now the home of the Buderim Historical Society. It was around this time that Kanaka (South Pacific Islander) near-slave labour was used on the local sugar plantations. This is not a happy memory for the local community although one citizen, a Quaker named Joseph Dixon, built a slab-and-shingle shed near the sugar cane mill which was used by the Kanaka children as a school and Sunday school.

* The first crops of Buderim bananas were harvested in 1883-84. They were grown by James Lindsay who transported them to the coast where they were shipped to Brisbane. This was always a problem as often ships did not arrive and the bananas would rot on the wharves.

* Transportation was an ongoing problem. When the rail reached Landsborough Buderim farmers turned away from the coast. Eventually in 1914 a tramway was built between Buderim and Palmwoods. It operated from 1914-1935.

* The biggest boost to the local rural economy was the discovery of the region's ability to grow ginger. From 1916 until the present day it has been a vital part of the district's economy.

There are a number of commercial websites but the best site for the visitor, with plenty of details about local attractions, is http://www.buderim.qld.au. Check out 'Must See Places'. 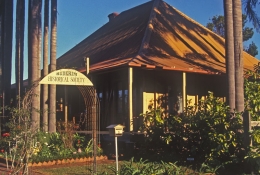