Bulahdelah is the western access to the Myall Lakes. A typical bypassed highway service town it has had to search for a new identity. It has become increasingly important as boating on the lakes and exploring the surrounding National Parks have become more popular. The town is an ideal starting point for houseboat holidays on the lakes. It is still also attractive for those people wanting to pause on the journey north as many of the services - fast food, petrol, visitor information for the region etc - are still vital to the town's economy.

Bulahdelah is located 244 km north of Sydney via the Pacific Motorway. It is 96 km north-east of Newcastle.

Bulahdelah is a Worimi Aboriginal word which probably means "the meeting place of two rivers." The name was first given to the mountain to the east of the town. It was called Mount Bulladella by the explorer and surveyor John Oxley in 1818.

Bulahdelah Court House
The most significant historic building in the town is the old courthouse (1886) on a hill to the east of town  (corner of Crawford and Ann Streets) overlooking the Myall River. It is now the home of the Bulahdelah Historical Society. The cells out the back are worth a visit. They are remarkably salubrious and spacious. The museum is open Saturdays from 9.00 am - 3.00 pm or by appointment, tel: (02) 4997 4741. The Bulahdelah Historical Society website explains: "The Museum is made up of the main court building as well as the old kitchen/laundry (being the original magistrate’s residence) as well as the cells and holding courtyard area. The police also used the complex as staff residence up until just after the courthouse functions ceased in 1973. The Society boasts a fine garden surrounding the Courthouse complex. The Society has a fine collection of historical photos ... covering the local timber industry, alunite mining and village infrastructure like bridges, roads and buildings etc." For more information check out http://bulahdelahhistorical.org.au.

Bulahdelah Clydesdales
An unusual attraction in the district are the Bulahdelah Clydesdales where tours, usually of two hours duration, offer an opportunity to get up close and personal with the huge "heavy horses" that were so vital in the development of rural Australia. The website explains: “When you arrive at the farm you’ll have a chance to meet and feed the Clydesdales and our rescue donkey “Murphy” … we will give you a demonstration in the round yard of how we train our horses, so they are safe no matter what we ask them to do … When we have demonstrated the famous “Join Up” in the round yard, you’ll be able to come in and have a go yourself if you want to … Then we show you how we do “Long Reining”. This is where we use long leather lines and stand behind the horse and steer it through our mini obstacle course.” Tel: 0434 523 355 or check out https://www.bulahdelahclydesdales.com for more details and pricing.

Myall Lakes National Park
The Myall Lakes National Park, which lies to the east of Bulahdelah, is the largest natural freshwater lake system on the New South Wales coast. It covers 31,562 ha of headlands, forests, swampland, forest fringes to the west and nearly 10,000 ha of coastal lagoons which include - Myall Lake (5,800), Boolambyte Lake (1,100 ha) and Bombah Broadwater (2,400 ha) - and are linked by narrow waterways to form a continuous lake system which is joined to Port Stephens by the lower Myall River which becomes increasingly saline as the reaches the saltwater of Port Stephens. The lakes have been listed as a wetland of international significance under the RAMSAR convention. To the east, between the lakes and sea, are high sand dunes with varied vegetation cover. Along the coast are 40 km of lonely and isolated beaches. The park stretches from just north of Tea Gardens and Hawks Nest up the coast to Seal Rocks and inland to Bulahdelah. Not surprisingly there are diverse ecosystems - from coastal dunes to rainforest - which are conducive to rich plant communities and interesting wildlife.

Boating Holidays
One of the great appeals of Myall Lakes is the 130 km of waterways which can be explored, particularly in a leisurely fashion on a househoat. Bulahdelah houseboats and yachts for hire, as well as cruises of the river and the Myall Lakes. Just follow Crawford St past Anne St down the hill to the rivers' edge. The river is a known fishing spot for, blackfish and perch. There is a Bulahdelah-based company - Luxury Houseboat Hire, tel: 0410 437 225 or check out http://luxuryhouseboat.com.au/ and Getaway Luxury Houseboats, tel: 1800 620 202. They have a range of houseboats for hire.

Bulahdelah Mountain Forest Park
Bulahdelah Mountain Forest Park  is accessed via Meade Street. At the end of this road is the State Forestry Commission District Office, tel: (02) 4997 4206. It is worth a visit as they can furnish maps and a range of pamphlets containing information about the state forests in the area and outlining drives and walking trails. There are picnic grounds at the base of the mountain and they contain information boards about the park. The Twin Dams Nature Trail, 650 metre ramble through swamp forest, moist and dry eucalypt forest and small pockets of rainforest above Twin Dams, which were built for the alunite mining c.1880. The picnic area was once an alunite stockpile site. The ore was transported down the mountain by cable-operated carriers. A tram line then took skip trucks along Church Street to the river where it was loaded on barges.

A narrow, steep and rocky road (1.5 km) leads from the picnic area to two trails heading off into the bush, a set of concrete steps near the information board and another trail. The two trails loop and form one short track which passes the old Tunnel Quarry site.

The concrete steps are the starting point for the Alunite Trail which goes past the Kimberley Quarry and Ladysmith Quarry sites. Follow the path to the Big Quarry site where there is a lookout which faces west. The view over Bulahdelah is excellent. From Ladysmith Quarry down the hill the track is that of the old tramway. The walk is about 40 minutes return. Another track is the Ted Baker Walk which has views down the coast to Broughton Island, Yacaaba Head and Tomaree Head.

Attractions north of the Town
Grandis Flooded Gum
Located north of Bulahdelah is the Grandis Flooded Gum, a huge, 400-year-old flooded gum (Eucalyptus grandis) which, at a height of 76.2 metres and 11.5 metres diameter at ground level, is said to be the tallest tree in New South Wales. It is easily accessible. Drive north on the Pacific Highway beyond Bulahdelah, turn off on The Lakes Way until there is a sign to the left to Stoney Creek Road. There is a signpost directing the visitor to the 'Grandis' which is an impressive tree in the forest. It is suggested that there is a larger tree elsewhere in the forest but it is not accessible. So it is really the second tallest tree in the state. For additional information check out http://www.nationalparks.nsw.gov.au/myall-lakes-national-park/grandis-picnic-area/picnic-bbq.

Wootton Historical Railway Walk
Located 20 km north east of Bulahdelah the Wootton Historical Railway Walk is a 6 km walk which starts at Sam's Camp Picnic Area and "takes in rainforest and cleared, grassy areas used by logging vehicles in the early 1900s. The walk follows significant remnants of old logging railways and mossy bridges, passing by waterfalls, creeks and through gully rainforest and magnificent regrowth flooded gums, before finishing at the remains of what-was-once a Trestle Bridge". The original light railway was constructed in 1890 to cart timber from the forests to the Coolongolook River to Mayers Point on Lake Myall. The wood was used in the construction of the Sydney Harbour Bridge and the Melbourne docks. Logging began in the Bulahdelah forests as early as the 1820s. Bullock trains were first used. They were changed for a tramline, initially horse-drawn but later pulled by steam locomotive.

The Lakes Way
An alternative route to the north is the delightful Lakes Way which passes through the forests around Bulahdelah and heads towards the coast before passing through Forster and joining up with the highway to the south of Taree. The route includes the road heading to the 'Grandis', the attractive village of Bungwahl and a turnoff to Seal Rocks.

Wallingat National Park
Located north of the tiny village of Bungwahl, Wallingat National Park which covers the area east of the Wallingat River and north of Smiths Lake. The Wallingat Forest Drive is a 25 km loop which  "takes you through the thick forest, the snow-white trunks of gum trees towering over you, and underneath the vast leaves of the cabbage palm shading the road. The route takes in all the major sites of the park, including Wallingat River picnic area, where you can stop for a swim ... You’ll see birds swooping low throughout the drive, wallabies bounding across your path, and maybe even a goanna basking in the sun – so be sure to drive with care. This is an unsealed road, so plan your trip well – wet weather makes it unsuitable for 2WD vehicles."

The highlights include Sugar Creek Flora Reserve Walk which starts at the Sugar Creek picnic area, is 3 km (round journey) and takes around an hour (it is defined as an easy walk). It is common to see koalas, yellow-bellied gliders and over 200 species of birds including black cockatoos, blue wrens and king parrots. Check out http://www.nationalparks.nsw.gov.au/wallingat-national-park/sugar-creek-picnic-area/picnic-bbq for more details.

The Wallingat River Forest Park (1 km each way, easy, 80 minutes return) is the track between Wallingut and Cockatoo picnic areas. There was a small community in the vicinity which supplied timber for the punts headed upriver to timber mills at Coolongolook and Tuncurry. The picnic area was once a log dump and the camping area a bullock pen.

The Whoota Whoota Lookout offers outstanding views over Wallis Lake and south-east down to Hawks Nest and the offshore islands.

The park's birdlife is prolific and includes rare species such as the little tern, the sea eagle and the wampoo pidgeon. There are also bandicoots, kangaroos, koalas, possums, wallabies and gliders. There is a detailed guide to the main walks in the park at http://www.environment.nsw.gov.au/nationalparks/parkWalking.aspx?id=N0132. Check it out.

* Prior to the arrival of Europeans the area around Bulahdelah was home to the Worimi Aboriginal language group.

* In 1818 the explorer and surveyor John Oxley named the mountain to the east of the town, Mount Bulladella.

* Timber cutters moved into the area in the 1840s.

* In 1878 Mount Bulladella was mined for alunite. It was recognised as the largest deposit of alunite in the Southern Hemisphere. Locals took to referring to the rocky outcrop as Alum Mountain. The mineral alunite was used as a fertiliser and in the textile industry.

* In 1913 the timber company, Alan Taylor & Co Ltd, moved into the area, established a timber mill and built a railway to convey the timber from the sawmill to the lake's edge.

* The area around the mountain has been declared a state forest reserve called Bulahdelah Mountain Forest Park in 1979.

* In 2013 the Bulahdelah bypass was completed.

There is a useful local website  http://www.bulahdelah.net.au which provides information about accommodation and eating in the area. Also check out https://barringtoncoast.com.au/destinations/wootton-and-bulahdelah. 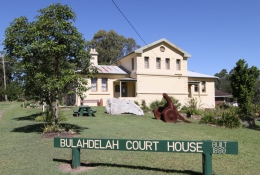 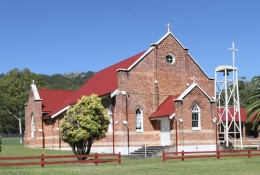 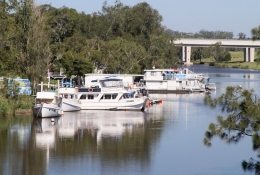 Houseboats for hire on the Myall River at Bulahdelah. 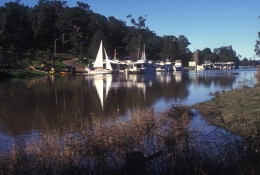 Boats on the lake's edge at Bulahdelah. 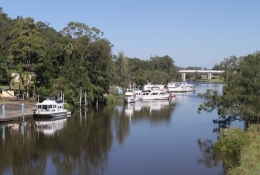 The boats for hire on the Myall River at Bulahdelah.