Charming village with a Scottish flavour in the New South southern highlands.

The appeal of the Southern Highlands was always about bushwalking, a certain English-Northern European ambience, and the cooler climate. So when the railway reached Bundanoon in 1868 guest houses and hotels sprung up and it became a popular retreat from Sydney's oppressive summers. To visit Bundanoon today is to feel that little has changed since the 1920s and 1930s. Bundanoon, because of its impressive hotel and its excellent bushwalking in the Morton National Park, has enjoyed continuing prosperity and today it is a village with great charm which promotes itself as a cold climate, "highland gathering" kind of destination. It recently became Australia's first bottled water-free town.

Bundanoon is located 149 south-west of Sydney via the Hume Motorway. It is 18 km south of Moss Vale via Sutton Forest and Exeter and 680 m above sea-level.

Here's one of those wonderfully quirky town names. The district was named by the explorer Charles Throsby who passed through in 1818 searching for a route to overland cattle to the South Coast. Throsby named the area Bantanoon. It is believed that 'bantanoon' is a corruption of a Tharawal (Dharawal) First Nation word meaning "deep ravine" or 'place of deep gullies'. This makes sense the district is on the edge of the Illawarra plateau and there are plenty of deep gullies nearby. Somehow 'bantanoon' became 'Bundanoon' and it was only a short step from there for someone to declare that it was obviously Scottish and to insist that Brigadoon: The Bundanoon Highland Gathering be held every April.

The Sandstone Sculptures
There are a series of amusing and artistic sandstone sculptures of indigenous animals which are located beside the roads and streets around town. There's an echidna in the park on the way into town and a rough hewn "Wallace B. Wombat" further down the road. Also there's a lyrebird near the railway bridge, a cockatoo near the railway station and a lizard in Bellevue Park. This is a work in progress. Other sculptures will be added. They are all created by local resident, Ken McDonald. The project is organised by The Green Team, a local group committed to the local environment.

At 199,747 ha Morton National Park is one of the largest parks in New South Wales. It spreads across the southern and eastern sections of the Southern Highlands and includes rugged sandstone cliffs; dramaatic waterfalls; deep valleys characterised by dense forest; areas of sedgeland, woodland, heath and rainforests; and it includes the headwaters of the Clyde, Shoalhaven, Endrick, and Kangaroo Rivers.

The park is known for its diversity of flora and fauna with wildflowers in abundance during spring and summer; giant turpentine trees below the major cliffs; coachwood and black ash in abundance and rainforest canopy in the valleys and gorges.

The park is also known for its birdlife with many places being ideal for "twitchers". The park is home to hawks, wedge-tailed eagles, parrots, honeyeaters, lorikeets, crimson rosellas, cuckoos, cormorants, grebes, lyrebirds and two threatened species - the swamp parrot and eastern bristle bird. There are also wallabies, kangaroos, bandicoots, possums, echidnae and dingoes, plus marsupial mice, snakes and lizards. For more details check out http://www.nationalparks.nsw.gov.au/morton-national-park?gclid=Cj0KEQiA-PGiBRDRz4jH9o39yZwBEiQAWCBZNfKz_jd1kwot71ns1Lzx-ZrATS_q1jsa3YBGT28siPcaAgvQ8P8HAQ

Erith Coal Mine Track (1 hour loop) Start: Gambells Rest in Morton National Park. Grade: steep with steps - 2 km loop. The Erith Coal Mine operated between the early 1860s and 1872 and then from 1881-1889. It ceased altogether during World War I. The walk is a steep descent through woodland, heath and rainforest. The mine is fenced so there is no entry. The coal from the mine was of poor quality and was used mainly for steam engines.

Mount Carnarvon Track (30 minutes return) Start: Echo Point picnic area. Grade: easy. This is a pleasant walk to a lookout at Mount Carnarvon which has dramatic views across the valley of Bundanoon Creek and beyond.

Bundanoon Creek Track (3 hr return). Start: Tooths Lookout car park, Grade: very steep. 2 km return. This steep track goes down to Bundanoon Creek. There is a steep climb back to the top of the valley.

Glow Worm Glen Walk (1 hour return) Start: William Street. Grade: Steep with steps. This is a short, relatively easy 30 minute walk to the sandstone grotto known as Glow Worm Glen. The glow worms can only be seen at dusk and in the evenings. After a 30 minute walk visitors reach a platform. A torch is needed for the return trip. The site is also accessible from Riverview Road within the park. Fern Tree Gully can also be accessed from Riverview Road.

Long Point Lookout
The views from Long Point Lookout are panoramic and dramatic. If you head south-west from Bundanoon for 25 km and turn left into Long Point Road (2 km beyond Tallong) and drive for another 5.8 km you'll reach a signposted trail (it takes about 90 minutes return) which will take you to a lookout over the Shoalhaven River.

Brigadoon: The Bundanoon Highland Gathering
Pipe bands, men in kilts, tossing the caber competitions, a kilted running race and the announcement of a Chieftain for the Day are all part of the Brigadoon celebration which is held in Bundanoon every April. It has been held every year since 1978. Check out the website - http://www.brigadoon.net.au/ - for further information.

Exeter
Exeter is 6.5 km north of Bundanoon and 720 m above sea-level. It is a quiet highlands village known as 'Little England' because of its trees, private gardens and climate. The first European settler in the area was James Badgery in 1821 and the town was established in 1889. Today it is a pleasant spot for a stroll. St Aidens Church of England (1895, enlarged 1903) has some fine stained-glass windows. This is a village for people who want to think they are living in the Australian equivalent to the London stockbroker belt. There gracious houses set well back from the road and approached by gravel drives which reach back from handsome entrance gates.

* Prior to European occupation the district had been inhabited by members of the Tharawal (Dharawal) Aboriginal language group. It was also a meeting place for the Wadi-wadi and Gandagara people.

* The two sons of Alexander Hume of Appin, accompanied by their uncle John Kennedy, investigated the area in 1814.

* By 1824 Surveyor Harper had reserved 1200 acres which became known locally as 'Barren Ground'.

* The 1861 Land Act opened the area up for European settlement. Charles Jordan immediately took up land.

* When the railway arrived in 1868 it passed through Jordan's property and consequently the station was named Jordan's Crossing.

* The Great Southern Railway reached the town in 1868 and tourism grew rapidly. At the time the town was known simply as Jordan's Crossing.

* In 1870 a Primitive Methodist Church was holding services and was being used as a school.

* By the 1870s there were no Dharawal people left in the district.

* Timber became important to the local economy in the 1870s and there were two sawmills operating.

* In 1879 the Holy Trinity Anglican Church was consecrated.

* A school was built for the local pupils in 1880. The village was still known as Jordans Crossing and the local community petition for a name change.

* By 1881 the village had a sandstone quarry, two stores, two churches and a butcher's shop. In this year the village was officially named Bundanoon.

* Bundanoon started to attract tourists in the late 1880s. At the peak there were 68 guest houses in the area. The village became a hugely popular holiday resort and a retreat for honeymooners.

Bundanoon doesn't have its own information centre. All information on the town and surrounds is available from Southern Highlands Information Centre, 62-70 Main Street, Mittagong, tel: (02) 4871 2888.

The local website - http://bundanoon.com.au/ - has useful advice on places to stay, where to eat and the diversity of activities in the district. 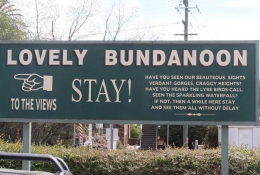 Historic sign near the railway station poetically extolling the delights of the local area. 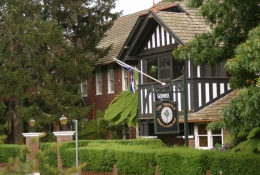 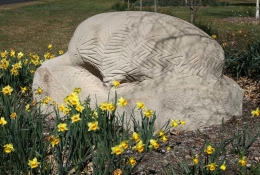 An echidna - one of the many sculptures of native animals presented to the community by Bundanoon Sandstone Pty Ltd. 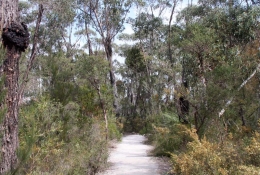 The path to Echo Point Lookout 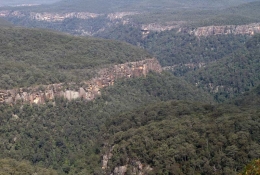