Bundarra is a tiny rural settlement on the Thunderbolt Highway between Armidale and Inverell. It is one of those towns that it is easy to pass through without really noticing that it has some interesting historic buildings and that Copeton Dam, which is 43 km away, is a magnet during the summer months. For birdlovers the region is home to the critically endangered Regent Honeyeater which can be found in the ironbark trees in the district.

Bundarra is located 582 km north of Sydney and 378 km south-west of Brisbane on the road between Armidale (88 km to the south-east) and Inverell (44 km to the north). It is 700 metres above sea level.

Bundarra is a Kamilaroi word for the grey kangaroo.

Police Station and Court House
The most interesting historic buildings in town are the police station and residence (c. 1879) with a stables/garage on the corner of Oliver Street and Bendemeer Street. It features a stone-flagged veranda, a hipped roof and flat brick arches over the window heads. It is listed on the Register of the National Estate.

Court House
There is a museum in the Court House. It houses an interesting display of local memorabilia and the surrounding complex now includes the Mount Drummond School which has been moved to the site. It has been furnished in the style of an old school room and contains an interesting photographic display of the local area.

Bottle Museum
Known as the Gallery of Glass and located at 18 Bendemeer Street, this former Baptist church now has a collection of over 6,000 bottles as well as Aboriginal pipes and artefacts. The church was built in 1959.

Commercial Hotel
Located at 16 Bendemeer Street and built in 1861, the Commercial Hotel is heritage listed. It was once visited by Captain Thunderbolt. In recent times it has been upgraded and today it offers pub meals and accommodation.

Gwydir River
The banks of the Gwydir River in the town are an ideal place to stop and relax. As well the river is a noted breeding ground for freshwater fish species such as cod, redfin, yellow belly, catfish, silver perch and bass. It is also possible to see platypus in the river particularly around dawn and dusk.

Copeton Dam
Located 43 km to the north-west of town is Copeton Dam and Copeton Waters State Park, the 900 ha recreational and adventure playground. There are camp and caravan sites, a kiosk and general store, an amenities block, cabins, fuel sales, boat hire, a six-hole golf course, tennis courts, sailing, windsurfing, power boating, water skiing, fishing (for cod, yellowbelly, silver perch, catfish and redfin), walking tracks, two adventure playgrounds, waterslides and plenty of wildlife. Tel: (02) 6723 6269 or http://www.copeton.com.au. The Gwydir River runs between the lake and Bundarra where it passes right through the town. It is a popular fishing destination.

Rumbling Mountain (George’s Mount)
Located directly east of Bundarra (although it is 115 km by road) is a rocky scrub-covered hill that occasionally rumbles. The Kamilaroi Aboriginal people have a legend that a Kamilaroi elder fought a huge kangaroo in a battle that lasted for a very long time. Finally they became tired and rested for a time of many months and then restarted the battle. The rumbling is the angry voice of the tribal elder and the thumping and shaking is caused by the kangaroo beating his massive tail on the ground.

Mount Yarrowyck Nature Reserve and Rock Art Site
Located 49 km south of the town along Thunderbolt's Way is the Nature Reserve which preserves the traditional lands of the Anaiwan people. The reserve was created in 1983. It is 589 ha. There is a small signpost pointing towards the gravel road which leads to a car park and picnic area where there are boards pointing out the highlights of a 3 km loop walk to an Aboriginal rock art site in a small shelter on the south-western slopes of Mt Yarrowyck. On a rock surface are some red ochre paintings which are dominated by bird track motifs. There are also stick figures and other geometric shapes. It is an information cave telling other Aboriginal groups what type of food was available in the area. For more information check out http://www.nationalparks.nsw.gov.au/visit-a-park/parks/mount-yarrowyck-nature-reserve and http://www.visitnsw.com/destinations/country-nsw/armidale-area/uralla/attractions/mount-yarrowyck-nature-reserve.

* Prior to the arrival of Europeans the area was inhabited by people from the Kamilaroi and Anaiwan language groups.

* The explorer Alexander Cunningham passed through the district in 1827.

* In 1836 Edward G Clerk and John Rankin took up land which he called Bundarra Station.

* In 1837 William Smith took up land which he called Laura.

* By the late 1830s John Cameron ahd taken up land which he called Lochiel. He sold the property in 1841 by which time it was known as Abington.

* In May 1868 the bushranger known as Thunderbolt (Fred Ward) stole two quality horses from the stables at Abington station, near Bundarra. They belonged to police inspector Brown and a trooper who were then staying at the station.

* Around 1879 the Court House and Police Station were built.

* In 1881 the Bundarra Bridge across the Gwydir River was opened.

* In 1978 Fred Schepisi used the town as a location in his film The Chant of Jimmie Blacksmith.

* The Police Station operated until 1980.

A good overview is provided at http://uralla.com/bundarra-63.html and there is also an excellent community website - https://www.bundarra.info. 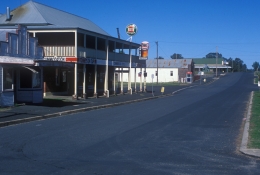 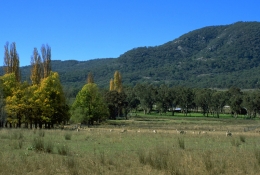 The road between Armidale and Bundarra 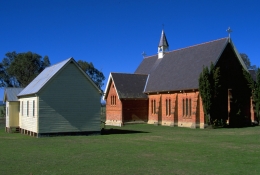