Small town on the edge of an impressive State Recreation Area.

Bungonia is a tiny town made notable only by the presence of the oldest Roman Catholic church in Australia and the beautiful Bungonia State Recreation Area which not only has a series of sublime views down into the gorge carved by the Shoalhaven River but also has a huge limestone quarry which is a reminder of how much damage can be done to an otherwise pristine landscape by open cut mining.

Bungonia, which is 580 metres above sea level, is located 185 km south-west of Sydney via the Hume Freeway.

It has been claimed that Bungonia means "sandy creek which only flows when it rains" in the language of the local Gundungurra Aboriginal people.

Bungonia's Churches
Bungonia has two important churches of which St Michael's Roman Catholic church - the oldest Roman Catholic church in Australia - is the most interesting. It was opened in 1839 and consecrated by Bishop Polding in 1847. It is hardly a handsome church being made from cement-rendered random-rubble. The town's attractive church is the Christ Church Anglican Church (1893) which stands on the opposite hill.

Bungonia State Recreation Area
The Bungonia State Recreation Area covers 3,971 ha of bushland in the Southern Tablelands and is characterised by deep limestone gorges, dry sclerophyll forests, and around 200 caves - five of which are reputedly the deepest caves on the Australian mainland. It was reserved for public recreation in 1872 and became a state recreation area in 1974. Recent research has discovered over 300 types of flora in the park and over 70 varieties of birdlife. The National Parks and Wildlife Service's 1998 Management Plan describes the recreation area as catering "for a variety of activities including caving, walking, canyoning, abseiling, rock climbing, canoeing, camping, sightseeing and scientific research. Many of these are undertaken in environmentally sensitive locations or rugged terrain."

The recreation area's main attractions include Bungonia and Jerrara Falls; Jerrara Canyon Lookout, Jerrara Lookout, Adams Lookout and the Lookdown; the Mass Cave and Grill Cave, the Green, White, Yellow and Red tracks which traverse the plateau and drop down to Bungonia Creek and Shoalhaven River

For general information contact the New South Wales National Parks and Wildlife Service, Lookdown Road, Bungonia on tel: (02) 4827 4700. Check out http://www.environment.nsw.gov.au/resources/parks/pomfinalbungonia.pdf for detailed information about the park and a good map of the park's fire trails, walking tracks and main accessible caving sites. And National Parks cover the main attractions in some detail at http://www.nationalparks.nsw.gov.au/parks?keyword=Bungonia%20National%20Park.

The Lookdown
Located 1.5 km from the Bungonia National Park office and only 50 m from the car park, this viewing area offers excellent views down to the Bungonia Creek valley. The valley below the lookdown is known variously as Bungonia Gorge, Bungonia Slot Gorge or Bungonia Canyon and is a drop of nearly 300 metres in a gorge which is only 800 metres long and only 76 metres wide. It  is the reputedly the deepest gorge in Australia. Certainly it is a fine view over unspoilt bushland. Check http://www.nationalparks.nsw.gov.au/bungonia-national-park/the-lookdown-lookout/lookout for more details.

Caving, Canyoning and Climbing in Bungonia National Park
The National Parks and Wildlife website points out that "There are around 200 ‘wild’ caves in the park, many of which are open for experienced cavers to explore, so you’ll be spoilt for choice. For an exciting journey of waterfalls and plunge pools, Bungonia Creek and Jerrara Creek are the most popular canyoning spots. Bungonia Slot Canyon provides one of the few opportunities in Australia for climbing limestone and is as dramatic a place to scale a rock wall as its name suggests." For more information check out http://www.nationalparks.nsw.gov.au/bungonia-national-park. One of the well known caves within the National Park, Drum Cave, is a known breeding area for the endangered Large Bent-Wing Bat. Consequently the park authorities close it annually from 1 November to 1 April. The Odyssey Cave, which has a depth of 147.8 m is the second deepest cave on the Australian mainland.

The Limestone Quarry
It is spectacular and the view from the road to the Lookdown across to a vast hillside which has been turned into a quarry is a reminder of how the mining industry can defile some of the countryside's natural wonders. The Colong Foundation's website (http://www.colongwilderness.org.au/archive/RedIndex/NSW/bungon99.htm) records the history of this scar on the landscape as follows: "1921 - Limestone quarrying commences north of the Bungonia Gorge at Marulan South on a small scale.

1970-71 - Minister for Mines authorises the substantial revocation of reserves 2263 and 2755 on the northern side of Bungonia Creek to allow for a southward expansion of Australian Portland Cement Manufacturers Ltd’s (APCM) quarries on two new leases. Mining has continued and proliferated since this time, encroaching into the gorge to the very edge of Bungonia Canyon."

* Prior to the arrival of Europeans the area had been inhabited by the Gundungurra Aboriginal people for tens of thousands of years. To the east, around Bungonia National Park, there is evidence of people from the Njunwal and Wandandian language groups moving through the area.

* An ex-convict, John Wilson, was the first European to pass through the Bungonia district when he led an expedition into the area in 1798. The plan, devised by Governor Hunter, was to explore the area and provide a very negative report. At the time convicts were escaping and heading south in the mistaken belief that China was only 150 miles away.

* In 1818 Hamilton Hume, Charles Throsby and James Meehan passed through. They were assessing the agricultural potential of the plains around Goulburn.

* In 1818 the South or Argyle Road, little more than a track, was passing close to the settlement on a route from Camden via Bong Bong, Moss Vale, Sutton Forest and Brisbane Meadow to Lake Bathurst and Braidwood.

* In 1819 Governor Lachlan Macquarie ordered the construction of a Great South Road from Picton to the Goulburn Plains. The road, which passed through Marulan and had a major diversion to Bungonia, was opened progressively between 1830 and 1843. (see map http://www.igoulburn.com/site/files/ul/data_text12/2448956.pdf)

* In 1824 the botanist and explorer, Alan Cunningham, recorded the discovery of a cave in what is now the Bungonia State Recreation Area.

* By 1832 a town was starting to form. It was initially called Inverary which was the name of the Post Office. The area was mostly settled by convicts and ticket of leave men who worked on the large properties in the area.

* In 1836 Inverary was renamed Bungonia. By this time the Great South Road was traversing country from Marulan to Goulburn. The result was that Bungonia stopped growing.

* In 1851 gold was discovered in the Shoalhaven River near Bungonia but it was never enough to prompt a rush to the area.

* In 1866 the Roman Catholic School was opened with 39 students. It was made from sawn timber and shingles.

* In 1872 Bungonia National Park, known at the time as a water reserve, became one of the oldest protected parks in Australia.

* In 1880 the Catholic school became the local Public School and a schoolhouse and residence were built in 1882.

* In 1889 Louis Guymer became the first caretaker at Bungonia National Park. He remained as caretaker for the next 20 years.

There is a local website with lots of useful information - including photos of most of the headstones in the local cemetery. Check out http://www.bungonia.com.au 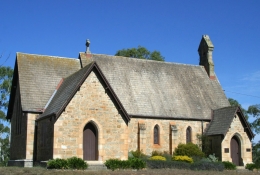 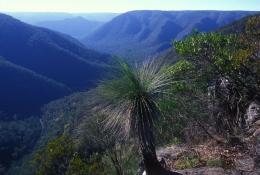 The view from the lookdown into the Shoalhaven River gorge.