One of the last remnants of coastal rainforest on the Gold Coast.

Burleigh Head (or Burleigh Heads - although there is only one headland) is one of the few places on the Gold Coast where the visitor can experience what the coastline must have been like before modern development. This is the thoughtful result of the preservation of the rocky headland to the south of Burleigh Beach and to the north of the Tallebudgera Creek estuary. It has been preserved as a National Park and it offers the visitor a rare opportunity to wander through rainforest surrounded on every side by beaches and high rise development. In a very real sense it is an oasis in a desert of skyscrapers, fast food outlets and holiday accommodation.

Burleigh Heads in the heart of the Gold Coast is located 89 km south of Brisbane via the Pacific Motorway.

Prior to European settlement the headland was named Jellurgal by the local Kombumerri Aboriginal people. No sources provide the origin of Burleigh although it is widely used in English speaking countries and there is a Burleigh Castle in England. It is most likely that, for reasons unknown, it evolved from 'Burly Head'. This was the name given to the rocky outcrop by the government surveyor, J.R. Warner, in 1840. He presumably thought it was massive and burly.

Beaches and Foreshore
Burleigh Beach
A narrow strip of foreshore parkland with pandanus palms and pines edges Burleigh beach which extends southwards to Burleigh headland (after which the suburb is named) and, south of the headland, to the mouth of Tallebudgera Creek. The North Burleigh SLSC is located on The Esplanade opposite Kratzman Avenue and the Burleigh Heads Mowbray Park SLSC is located at the southernmost end of the beach on Goodwin Terrace. Beyond the Burleigh Head SLSC is a pleasant and very popular walking path (ideal for joggers) and a parking area which provides access to the northern end of the National Park.

Burleigh Beach is recognised as a Gold Coast Point Break National Surfing Reserve with a plaque which declares: "For generations, Burleigh has provided challenging, hollow waves that have proven the ideal breeding ground for surfboard design advances and home-grown champions. Fittingly, Burleigh Heads was the birthplace of the modern professional surfing competition - the first man-on-man competition was held here. It is renowned throughout the surfing world for its unique waves and is sacred to many."

Burleigh Head National Park
This small 27.6 ha national park is actually a remarkable, isolated extension of a huge volcano which was centred on Mount Warning and which formed some 23 million years ago. The park preserves a small portion of coastal rainforest and heathlands and, as such, includes mangroves, eucalypts, and pandanus and over 90 species of snakes, lizards, wallabies, bandicoot, koalas and bush turkeys. It is a reminder of what the coast must have been like before the arrival of Europeans.

Ocean View Walk
There is a short, well-maintained, 1.2 km one way walk around the rocky foreshore of the headland which passes through littoral rainforest and pandanus groves until ti reaches Tallebudgera Creek at Echo Beach.

Rainforest Circuit
This 2.3 km (return) ocean view circuit offers superb views of the coast from Turngum Lookout, climbs to the top of the headland where the walker will observe some six-sided basalt columns, and in season, the passing of the humpback whales.

The Aboriginal Dreaming Story of Burleigh Head
"Jellurgal (Burleigh Head) was once a flat and unbroken stretch of sand dunes. The Creation Spirit, Jabreen, transformed it into a rocky outcrop. One day his pathway led him to the ocean beach where he took a long swim to the horizon and back. Emerging from the water, Jabreen, a giant of enormous stature, rose up to his full height and raised his arms skywards. As he did, the level ground followed his hands upwards to the level of his fingertips, thus forming the headland of Jellurgal with the rocky fingers pointing seawards."

Jellurgal Aboriginal Cultural Centre
Located at 1711 Gold Coast Highway (on the southern side of Burleigh Head near Tallebudgera Creek) the Jellurgal Aboriginal Cultural Centre is a cultural centre and information hub. As the centre's website explains: "At the Centre, you can watch as Jellurgal’s in-house Aboriginal artists create traditional artwork, browse the paintings for sale, and see Aboriginal artefacts such as dilly bags, shields, tools, boomerangs, nulla nullas, messages sticks, didgeridoos and other tools and instruments that were part of every day life. You can also purchase authentic souvenirs from the Jellurgal Gift Shop. Jellurgal’s boardwalk multimedia interpretation display is located at the Centre. It features interactive iPads so you can navigate your own cultural journey and explore the traditional lives of the Yugambeh people." It is an interesting and modern display of the culture which existed in the area before Europeans arrived. Tours are available. Check out http://www.jellurgal.com.au or tel: (07) 5525 5955.

David Fleay Wildlife Park
Located at the corner of Loman Road and West Burleigh Road is the David Fleay Wildlife Park which provides an opportunity to observe the native fauna of the area in its natural habitat. It was created by Dr David Fleay in 1951 and today is home to dingoes, kangaroos, koalas, salt and freshwater crocodiles, cassowaries, brolgas and most Australian indigenous animals. There are optional guided tours, wildlife talks, an Aboriginal program and a special area for children. The Nocturnal House has a platypus, as well as bilbys. quolls and dunnarts. During the course of the day there is crocodile feeding, tree kangaroo capers, platypus feeding and an opportunity to learn from the wildlife rangers. It is open from 9.00 am to 5.00 pm daily. For more information check out http://www.nprsr.qld.gov.au/parks/david-fleay/things-to-do.html. The park is now under the management of the Queensland Department of National Parks.

* Between 20-23 million years ago a series of volcanic eruptions produced Mount Warning and the rocky outcrop which is now Burleigh Head.

* Prior to the arrival of Europeans the area was occupied by Yugambeh Aboriginal people who fished the waters. The subgroup who lived in the area were known as the Kombumerri people.

For information about accommodation and eating in the local area check out http://burleightourism.com.au. 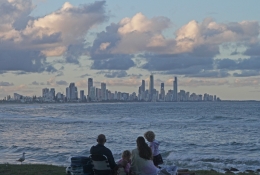 Watching the sun set over Surfers Paradise from Burleigh Head. 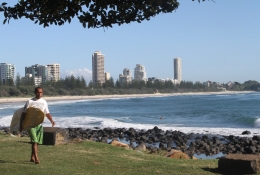 Heading off for a surf at the headland with Burleigh Heads beach in the background. 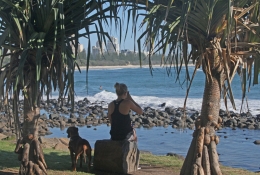 Breakfast with dog and view north of Burleigh Heads beach. 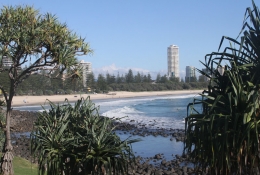 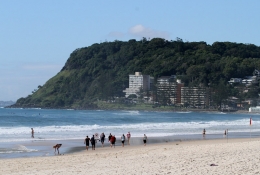 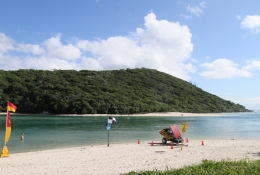 Burleigh Head National Park rises behind the mouth of the Tallebudgera Creek. 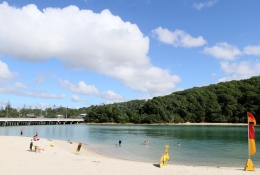 The beach at the mouth of the Tallebudgera Creek.